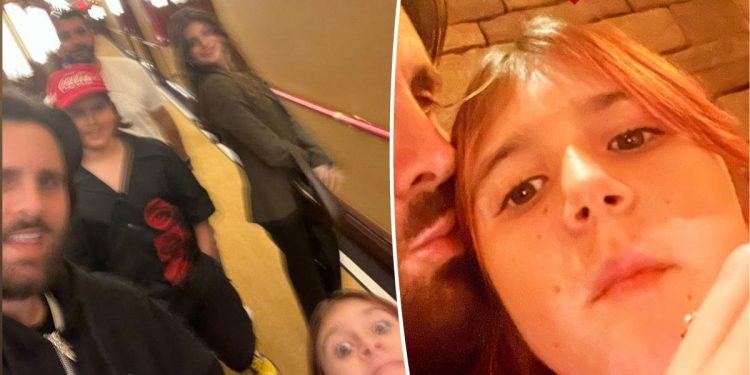 Scott Disick is back with his brood.

The “Keeping Up With the Kardashians” alum reunited with his three children after they returned home from their mom Kourtney Kardashian’s wedding abroad.

“I got my baby,” Disick, 38, captioned an Instagram Story shot of son Reign, 7, sleeping Tuesday.

The former “Flip It Like Disick” star went on to post a blurry selfie featuring son Mason, 12, and daughter Penelope, 9, writing, “Got my crew with me.”

Disick and Kardashian’s daughter then posed for more pics with her dad.

“My little girl is getting so big I can’t take it!” he added.

The Talentless creator, who dated the Poosh blogger from 2006 to 2015, was not invited to Kardashian and Travis Barker’s Portofino, Italy, nuptials Sunday.

He did, however, document his busy week via Instagram.

After posting private jet photos and telling his followers that his “next stop” was “the beach,” Disick took a trip to New York City. He visited Sapphire strip club and had a “little movie night” with room service while staying at Casa Cipriani.

Kardashian, for her part, gave many glimpses of Mason, Penelope and Reign during her wedding weekend.

The little ones notably did not attend the “Kardashians” star, 43, and 46-year-old Barker’s previous weddings — a fake one in Las Vegas in April and a legal courthouse ceremony in Santa Barbara, Calif., earlier this month.

Penelope sported a Dolce & Gabbana dress to the third ceremony, appearing in a bridesmaid selfie with her mom and stepsiblings Atiana, 23, and Alabama, 16.

Kardashian also showed her daughter adorably sleeping in formalwear after the reception.

As for Reign, he had a major role as the ring bearer. The little one also joined the bride and groom on a yacht ride the following day.

While fans worried Mason was not in attendance when they initially did not see photos of him at the ceremony, guest Carl Dawson confirmed the preteen’s presence with a pic.

Trump made 27 endorsements in Tuesdays primaries. Here are the winners. - POLITICO - POLITICO