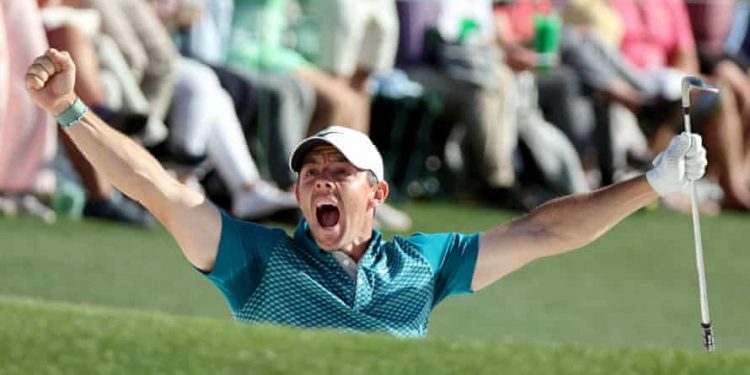 
Rory McIlroy’s wild celebrations were of a man who had just completed a career grand slam. Instead, Scottie Scheffler withstood one of the finest rounds in Augusta National’s fabled history to etch his name into folklore as a world No 1 who has won the Masters. Scheffler stood on the 18th tee with a five-shot lead in the 86th staging of this event. The stuff of dreams. A subsequent double bogey – which included a bizarre four-putt – mattered not a jot.

McIlroy’s race had looked run as he played from bunker to bunker on the tournament’s 72nd hole. Instead, the Northern Irishman holed out from the sand. The subsequent delirium of McIlroy and the galleries will linger as a moment for the ages. His 64 matched the lowest final round ever recorded in the Masters. His second place represents a career high in this major. Yet this was Scheffler’s day; just as it has been Scheffler’s year. What he may lack in personality he makes up for with iron accuracy that defies what pressure should do to even professional golfers.

“I have dreamed of being here and competing,” Scheffler said. “Friday is the first time I actually thought about winning. I cannot speak highly enough of this place. It’s amazing that I will be able to come back so often. In a way I’m glad I messed up the last, it has made me a little less emotional speaking now.”

There is always a moment. For Scheffler it arrived at Flowering Peach, Augusta’s 3rd hole. Cameron Smith, looking to become the only player other than Tiger Woods to win the Players Championship and Masters in the same year, had reduced Scheffler’s three-stroke lead by two thirds inside two holes. Scheffler had found trouble on the 3rd, from where he could only leave an approach short of the green. What followed was like a heavyweight boxer’s blow to Smith and further proof that everything Scheffler touches in a professional context, for the time being at least, turns to gold.

Scheffler’s chip was racing at such a pace that it may just have stayed on the green if not hitting the flag and tumbling to the bottom of the cup for a birdie three. As Smith made a bogey, the world No 1’s advantage was three once more. Smith was never to get any closer to Scheffler, who won his maiden major by three at 10 under par. His closing round was a 71.

As Smith wilted – his aspirations of Masters glory were ended by finding water from the tee at the 12th – McIlroy came charging through the field like a man possessed. McIlroy had been 13 adrift of Scheffler at one point on Saturday afternoon. He started round four 10 shy of the lead. McIlroy reached the turn in 32 and delivered a birdie at the 10th before punching the air at the time of his eagle on 13. Pars at the 15th and 16th looked ominous for the four-time major winner but fireworks were reserved for the last. Scheffler outplayed the field but McIlroy will take obvious heart from what he produced in round four.

Of the 18th scene, McIlroy said: “This tournament never ceases to amaze. That’s as happy as I’ve ever been on a golf course right there. I’m walking away from this tournament the happiest I have ever done.

“I came up a little bit short, but I gave it a great go, and I can’t ask any more of myself. I went out there today, shot my best ever score at Augusta. It’s my best finish. Not quite good enough, but I’ll come back next year and keep trying.”

Scheffler’s birdie at the 14th owed everything to a wonderful approach shot. With McIlroy perched in front of a television and Smith no longer a threat, Scheffler knew he could play the final four holes in three over and still win. Which would have been boring, of course. The 25-year-old made a birdie at the 15th, the final demonstration of a grip he was unwilling to loosen.

Scheffler carried his fair share of luck – he would call it providence – en route to victory but that tends to happen when a golfer is amid this kind of run. It will not always be this way for Scheffler, it just feels otherwise at the moment.

Collin Morikawa, playing in McIlroy’s company, also holed out from sand on the last. McIlroy cheered that one as well. Morikawa’s 67 was sufficient for fourth at four under. Shane Lowry’s 69 meant he tied Smith for third, one shot ahead of the Open champion.

Justin Thomas’s 73 left him at one under. Will Zalatoris, second in the Masters 12 months ago, further emphasised course specialism with a 67 that vaulted him to three under. Zalatoris therefore finished in a share of sixth. He will be back in 2023.

Much earlier, having finished at the foot of the remaining 52-man field, Tyrrell Hatton had publicly gone where few men do by expressing disquiet about the Masters venue. “You can hit good shots here and not get any reward for it,” Hatton said. “It’s unfair at times. I don’t agree with that. If you hit a good shot, you should end up near the hole. Not then short-sided into a bunker because of the slopes that they’ve created and stuff.

“I don’t think it’s a fair test at times, and when you hit good shots and you’re not rewarded for it, it shows. I haven’t enjoyed it.” Hatton’s membership invite remains stuck in the post.

For Scheffler, happier times. To be precise: $2.7m, a Green Jacket and fourth victory of 2022. It is astonishing to think that before the first of them, the Phoenix Open in February, Scheffler had not prevailed on the PGA Tour. He has been utterly relentless since. Just ask Rory McIlroy.