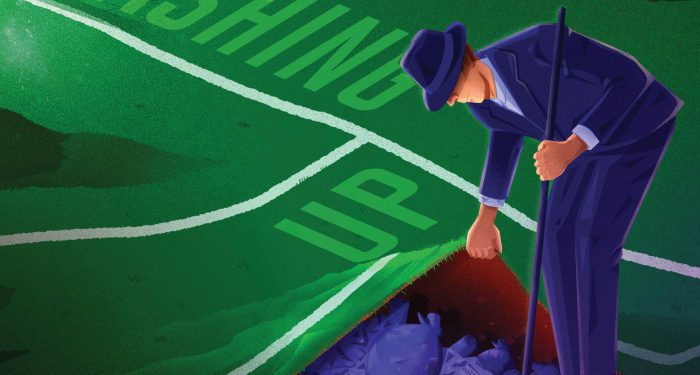 
Good morning, I’m Dan Gartland. I’ll catch you up on the Masters, but I really want to tell you about Roki Sasaki.

The average sports fan would be forgiven if they hadn’t heard of Scottie Scheffler this time last year. Hell, even some serious golf fans probably couldn’t have picked him out of a lineup. But after he won the Masters yesterday—the latest victory in his red-hot start to 2022—it’s safe to say that people know who Scheffler is.

Scheffler entered yesterday’s final round with a three-shot lead over Cameron Smith. Smith stumbled to a 2-over round of 73 to finish in a tie for third, while Rory McIlroy’s sensational final-round 64 was enough to lift him into second place. Even so, McIlroy was still three shots behind Scheffler.

Scheffler’s victory was never in doubt over the course of the back nine. He had a five-shot lead over McIlroy walking to the 18th tee and he had to have been grateful for the big cushion after what transpired on the final green. Scheffler four-putted for a double bogey, burning the edge of the cup on two short putts before finally sinking the putt that won the tournament.

It was an uncharacteristic stumble because, as Michael Rosenberg writes, perhaps Scheffler’s greatest strength is his ability to be cool under pressure:

“Most of us wondered about pressure. Most golfers would, too. But Scheffler has the most elusive quality in professional golf: When he is in position to win, he gets calmer. Scheffler, a Texas native, said this weekend that when he was younger, he would lose concentration early in tournaments, costing him strokes that annoyed him later. ‘Definitely easier late on Sunday to focus,’ he said. Nobody ever told that to Greg Norman.”

Scheffler is in the midst of a scorching run of dominance. Before February, he hadn’t won a single PGA Tour event but finally got over the hump by defeating Patrick Cantlay on the third hole of a playoff at the Waste Management Phoenix Open on Feb. 13. He finished seventh at the Genesis Invitational the next week and followed that up with a win in his next event, the Arnold Palmer Invitational. After finishing 55th at The Players, he won the WGC match play event in his final warmup before Augusta, moving him to No. 1 in the world. That’s four wins in eight weeks.

But Scheffler’s recent stretch shouldn’t come as a total shock. Since turning pro in 2019, he now has five top-10 finishes at majors and seven top-20s. After finishing tied for 18th at last year’s Masters, he finished in the top 10 of the rest of the majors in ’21 and then was part of the winning U.S. team at the Ryder Cup. The point is, at only 25, Scheffler is a guy who you should get used to seeing at the top of leaderboards for a long time.

⚾ I can’t stop thinking about what this guy did

If the final round of the Masters wasn’t yesterday, I absolutely would have led today’s newsletter with Roki Sasaki’s ridiculously dominant performance for the Chiba Lotte Marines.

Sasaki threw the first perfect game in Nippon Professional Baseball since 1994. But it gets even better. As if facing 27 batters and retiring them all in a row wasn’t impressive enough, Sasaki struck out 19 of those hitters. And on top of that, 13 of those strikeouts came in a row. (That’s three more than the MLB record for consecutive strikeouts tied by Corbin Burnes last year.)

Throwing a perfect game is one thing, but a 20-year-old mowing down a lineup that easily is unfathomable. You can watch all of Sasaki’s 19 punchouts here and laugh at how unhittable his splitter is.

Check out the best photos taken by SI’s photographers at Augusta. … Manchester City and Liverpool played to a draw in a key Premier League matchup that was defined by missed opportunities, Jonathan Wilson writes. … Albert Breer wrote about the life and football career of Dwayne Haskins, which was cut short Saturday.

The Lakers are reportedly going to fire coach Frank Vogel. … Joel Embiid locked up the NBA scoring title, becoming the first international player to lead the league in scoring and the first center to do so since Shaquille O’Neal. … Tiger Woods confirmed he plans to play in the British Open at St. Andrews. … The Nets are reportedly hopeful that Ben Simmons will play in the first round of the playoffs. … Sixers wing Matisse Thybulle won’t be eligible to play in Games 3 and 4 of Philly’s first-round series against the Raptors because he’s not fully vaccinated. … WrestleMania 38 garnered more attention on social media than February’s Super Bowl.

4. Scottie Scheffler’s hole-out on a chip for birdie on No. 3

3. Rory McIlroy’s hole-out from the bunker for birdie on 18

2. Collin Morikawa’s hole-out from the bunker for birdie on 18 immediately after his playing partner, McIlroy, did the same thing

1. Scheffler greeting his family after his clinching putt

Former Rangers, Braves and Yankees first baseman Mark Teixiera was born on this day in 1980. I was somewhat surprised to learn that he is fifth all-time on the list of career home runs by a switch hitter, with 409. Can you name the four players ahead of him? (Hint: He was teammates with two of them.)

Friday’s SIQ: What feat did Carlos Baerga accomplish on April 8, 1993, becoming the first player in MLB history to do so?

Answer: Hit a home run from both sides of the plate in one inning. It came against the Yankees as the Guardians blew the game open in the seventh inning. Baerga’s first homer was a two-run shot with nobody out batting righty against lefty Steve Howe. The next four batters reached base (a hit-by-pitch and three singles) and two more runs scored, and Howe was removed in favor of Steve Farr.

Farr retired the first two batters he faced but then allowed an RBI single to Kenny Lofton. Alvaro Espinoza, who had led off the inning with a single, then hit a three-run homer. Cleveland, which had been up 6–5 when the inning started, suddenly had a 14–5 lead. But the damage wasn’t done. Baerga stepped up to the plate again, this time batting lefty against the righty Farr, and hit a 2–0 fastball over the fence to make it 15–5.

Baerga, who had been selected to his first All-Star team in 1992, signed a six-year contract extension with Cleveland just two days before his big night against the Yankees. He was an All-Star again in ’93, batting .321 with 21 homers.

Baerga’s feat stood unmatched until the Cubs’ Mark Bellhorn equaled him with two homers from different sides of the plate against the Brewers on Aug. 29, 2002. The Angels’ Kendrys Morales became the third player to do so against the Rangers on July 30, 2012. It’s happened once every 10 years or so for three consecutive decades. Maybe we’re due for one this year.

The 1983 NCAA men’s basketball championship game produced perhaps the most lasting image in the tournament’s history. No one who’s seen it can ever forget the sight of a stunned Jim Valvano running in circles looking for someone to celebrate with after his North Carolina State team knocked off Houston on Lorenzo Charles’s dunk at the buzzer.

It was a fitting way for the Wolfpack to win. They had an underwhelming 17–10 record at the end of the regular season and hadn’t been ranked in the AP’s top 25 since the second week of January, but they strung together three tight wins (by one point, seven points in overtime and three points) to capture the ACC tournament championship and earn a tournament bid as a No. 6 seed.

Then they kept winning tight games. They needed two overtimes to defeat No. 11 seed Pepperdine in the first round, 69–67. Thurl Bailey had a tip-in with just a few seconds left to beat UNLV 71–70 in the second round. They cruised past Utah, 75–56, in the Sweet 16 to set up an ACC championship game rematch with Virginia. NC State won that game 63–62 and then beat Georgia 67–60 in the Final Four.

NC State would face its toughest test yet in the title game against Houston’s high-flying Phi Slamma Jamma team, led by Michael Young, Hakeem Olajuwon and Clyde Drexler. But the Wolfpack, led by Bailey and Dereck Whittenburg, did just enough to pull off the upset.

It was Whittenburg who had the ball in his hands near the end of NC State’s frantic final possession. This being the pre-shot-clock era, the Wolfpack passed the ball around for most of the final 44 seconds, trying to evade the Cougars’ trapping defense and nearly turning the ball over on multiple occasions. Whittenburg recovered a desperate pass with four seconds on the clock and put up an equally desperate shot from 35 feet out. By some miracle, the ball famously fell right into the hands of Charles, who put it through the rim as Olajuwon could do nothing but watch.

Writing in SI after the game, Curry Kirkpatrick gave credit to Valvano for his “intelligent” game plan and that “his brave, scrappy Wolfpack worked it to perfection,” but “even the most rabid Cinderella lover had to recognize that Houston gave away this championship just as surely as the Wolfpack took it.”

Kirkpatrick took issue with several of Houston coach Guy V. Lewis’s strategies, like leaving Drexler in the game with four fouls and instructing his team to hold the ball while Olajuwon was on the bench, tethering his high-flying athletes to the ground. In retrospect, we should be glad that Lewis bungled the game. We wouldn’t have gotten that shot of Valvano otherwise.

Kingdom Hearts 4: The Full Game Will Be Made With Unreal Engine 5

Kingdom Hearts 4: The Full Game Will Be Made With Unreal Engine 5