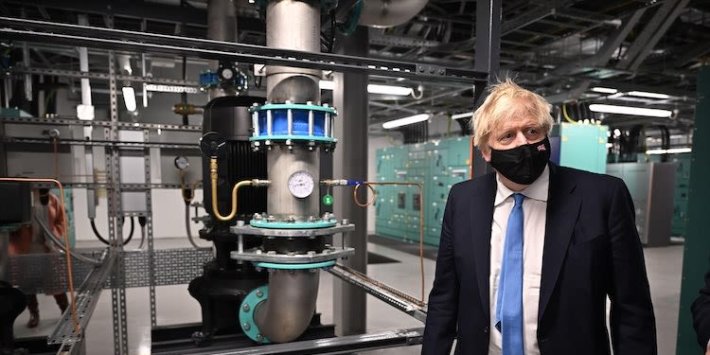 The leader of the Scottish Conservatives will not change his “principled position” on Boris Johnson, but the Prime Minister will “always be welcome” north of the border, close allies of Douglas Ross have said.

Johnson this morning visited Scotland for the first time since Ross called for his resignation over the ongoing scandal surrounding parties held in Downing Street during lockdown.

Since Ross’ intervention last month, 27 of Holyrood’s 31 Conservative MSPs have also publicly called for Johnson to quit, adding strain to the relationship between the Tory leadership and Scottish party.

During Johnson’s visit to Scotland on Monday, he announced the creation of two new “green” freeports, a collaboration between the Scottish and UK governments.

The new economic zones, a key part of the Prime Minister’s landmark strategy to “level up” Britain, will offer tax breaks and low tariffs to businesses from 2023.

The government, who alongside Scottish ministers will have a say in selecting beneficiaries of the freeports, have pledged £52 million to support the projects.

The Type 31 programme is supporting more than 2,500 jobs across the UK.

These ships will play a vital role in protecting UK security interests around the world. pic.twitter.com/QJi5zbkAGe

Scottish Conservative party insiders told PoliticsHome that while they welcome the move, no fundamental changes to the relationship between themselves and the Tory leadership is likely to come from it.

“We’ve welcomed the news on freeports, which is something we’ve been calling for and it’s pleasing to see the SNP drop their opposition and work with the UK Government to bring this about,” an ally of Ross told PoliticsHome.

The ally added that despite perceived efforts by Johnson to repair damage done with the local party, Scottish Conservatives are focused on positioning themselves as Scotland’s main opposition to the SNP and continue to distance themselves from Johnson and partygate.

“We all still work together behind the scenes just as we always have,” another Scottish Conservatives insider told PoliticsHome.

They described the Prime Minister’s visit as a “step in the right direction” but said “Douglas’s position and the position of the party is not going to change”.

“There’s never been a breakdown in the personal relationship [between Ross and Johnson] and there’s no underlying bad blood,” the insider insisted.

“Douglas has taken a clear and principled stance on this whole issue, but by the same token the Prime Minister is welcome in Scotland and the visit seems to have gone well.”

During his trip Johnson visited the Rosyth Dockyard in Fife but did not meet with Ross or any other Scottish Conservative party politicians.

The Prime Minister is due to address the Scottish Conservative party conference in Aberdeen next month, but due to a timing clash with the Tory spring conference in Blackpool, is likely to speak virtually. The party has not yet decided whether the address will be live or pre-recorded.

A Scottish Conservative Party source said that “nothing is set in stone yet” and the Prime Minister may yet show up in person.

A senior Westminster government insider told PoliticsHome that there is not a great amount of damage to repair in Scotland because “most Scots already had a firm view on the Prime Minister one way or the other”.

“If there is damage to be repaired, then yes – I think this [visit] could help,” they added.

Discussing the SNP’s late backing of the new freeports –  a decision opposed by the party’s coalition partners in government, the Scottish Greens – Scottish Shadow Energy, Net Zero and Transport Secretary, Liam Kerr, said: “The honeymoon appears to be over between the nationalist coalition partners. Despite their best efforts, the Greens have failed to get SNP Ministers to listen over their position on freeports.

“Their extremist views coupled by typical SNP grievance before now meant Scotland almost missed out on this golden opportunity of freeports altogether.”

At bioenergy crossroads, should corn ethanol be left in the rearview mirror?