SCOTUS Nominee Rejects Claims That Her Record ‘Endangers Our Children’ 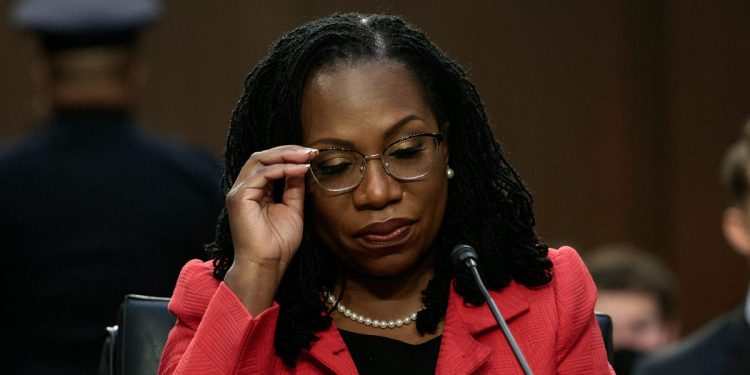 
Supreme Court nominee Judge Ketanji Brown Jackson on Tuesday forcefully rejected accusations that she’s been too lenient toward child pornography offenders, as some of her Republican critics have claimed.

“As a mother and a judge who has had to deal with these cases, I was thinking that nothing could be further from the truth,” Jackson said Tuesday. “These are some of the most difficult cases that a judge has to deal with because we’re talking about pictures of sex abuse of children, we’re talking about graphic descriptions that judges have to read and consider when they decide how to sentence in these cases.”

Jackson defended her use of judicial discretion in sentencing, noting that the law directs judges to take a variety of factors into account.

“That statute doesn’t say look only at the guidelines and stop. That statute doesn’t say impose the highest possible penalty for this sickening and egregious crime,” Jackson said. “The statute says calculate the guidelines, but also look at various aspects of this offense and impose a sentence that is ‘sufficient but not greater than necessary to promote the purposes of punishment.'”

Hawley on Monday raised his concerns with Jackson’s record, listing the cases that he would like her to explain her thinking. Several other Republicans on the committee, including Sen. Marsha Blackburn of Tennessee, have joined in Hawley’s criticisms and signaled they also expect to question Jackson on the issue.

Jackson emphasized that she understands “how significant, how damaging [and] how horrible” child pornography crimes are and does not take the matter lightly whatsoever.

“When I look in the eyes of a defendant who is weeping because I’m giving him a significant sentence, what I say to him is: ‘Do you know that there is someone who has written to me, and who has told me that she has developed

. She cannot leave her house because she thinks that everyone she meets will have seen her, will have seen her pictures on the Internet, they’re out there forever, at the most vulnerable time of her life, and so she’s paralyzed,'” she said.

Jackson said she shares this story with every child pornography defendant as a part of her sentencing “so that they understand what they have done.”

The judge added that she then imposes a “significant sentence” and “all of the additional restraints that are available in the law.”

“These people are looking at 20, 30, 40 years of supervision,” she said. “They can’t use their computers in a normal way for decades.”

Watch an older GM pickup two-step with a Texas twister