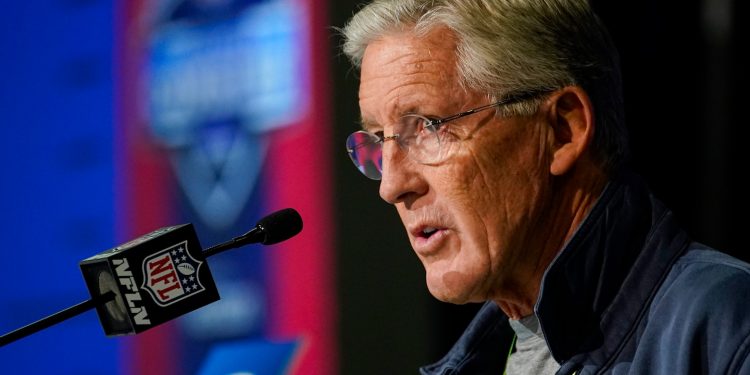 Wilson, 33, was reportedly at odds with the Seahawks last year, to the point where his agent told media that while no trade was requested, Wilson would waive his no-trade clause for four teams: Dallas, Chicago, New Orleans and Las Vegas.

The Seahawks, however, insisted their franchise player wasn’t going anywhere, a stance they reaffirmed Wednesday at the NFL scouting combine.

“We have no intention of making any move there. But the conversations, [general manager] John [Schneider] has to field those. He always has.”

The chance of Seattle moving on from Wilson appeared unlikely from the outset, largely because of the numbers: He has two years left on his contract with salaries of $19 million and $22 million annually. If the Seahawks were to trade him, they would save $11 million in cap space but would still have a $26 million cap charge on their books from his remaining prorated bonus.

Plus, the Seahawks have no clear successor on the roster, like the 49ers do behind Garoppolo.

The 30-year-old quarterback is likely done in San Francisco, where Trey Lance, the third overall pick in the 2021 draft, is now poised to take over the 49ers’ offense. The two both played during the regular season, but Garoppolo pushed through a thumb injury to play the entirety of the postseason for San Francisco, which ended with a loss to the Los Angeles Rams in the NFC championship.

Niners general manager John Lynch said Wednesday that the team has listened to trade inquiries for Garoppolo and will continue to do so.

“Jimmy’s a big part of what we’ve done and he’s still a part of us,” Lynch said. “… We have had some discussions with teams and we’ll continue to, but as of right now he’s a part of us.”

Lynch also said Garoppolo will undergo surgery on his throwing shoulder because of an injury he suffered during the 49ers’ wild card playoff win over the Dallas Cowboys.

Lynch said the procedure is “described as a minor surgery” and Garoppolo is expected to be cleared to throw by early July.

By then, he could be with a new team.

“A lot of people need or want quarterbacks right now and he’s obviously a guy they’d look at,” Lynch said. “So, yes, we have listened, but he’s a part of us and he’s going to work diligently to get back from surgery.”