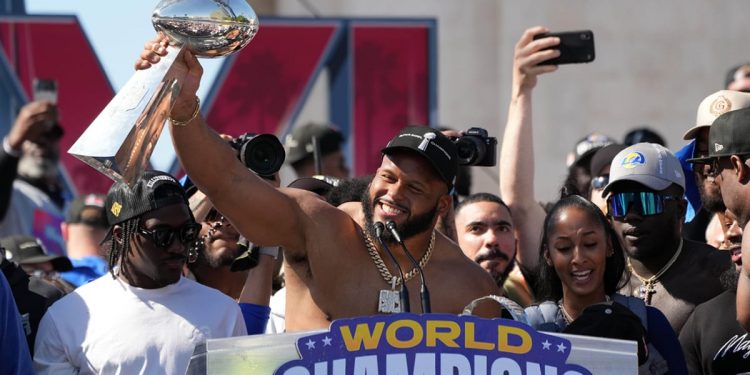 Rams coach Sean McVay told reporters Monday star defensive tackle Aaron Donald has informed the team he will return in 2022. Rumors of his retirement have swirled ever since February’s Super Bowl.

“Well it’s a huge priority for us,” McVay said, per Pro Football Talk. “I know that our group is working with Todd France [Donald’s agent] and trying to get that figured out. [I] Feel really good about Aaron’s excitement about coming back and continuing to lead the way for us. But that is a piece that we do want to be able to get figured out for him. And I think he’s deserving of it. And so, we’re in the process of working through that right now.”

Before Los Angeles’ Super Bowl win, Aaron Donald sat down with NBC’s Rodney Harrison and during a “personal” meeting, said that this could be his last year, Donald told Sports Illustrated earlier this month. Donald was unaware that Harrison went public with the information and found out after the Super Bowl win. He was clear he did not want Harrison to share that information.

During the team’s Super Bowl parade, Donald emphatically made it clear retirement was not on his mind.

“We built a super team, we can bring the super team back, why not run it back? We can be world champs again,” Donald said during the parade while raising the Lombardi Trophy.

The three-time defensive player of the year is now officially running it back.