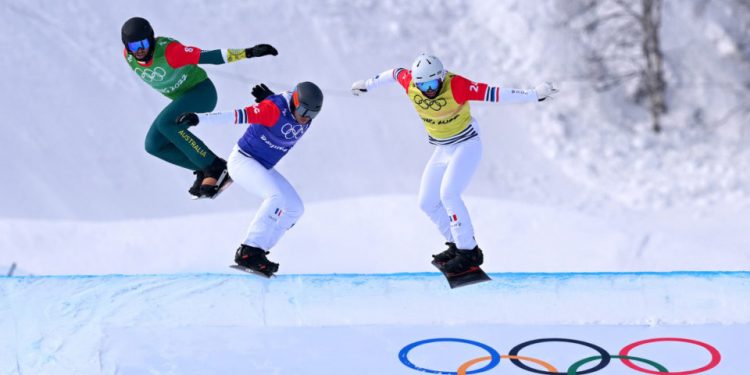 Team officials are in for a long night at the selection table as they decide on Australia’s best line-up for the mixed team snowboard cross event.

As they hunt an elusive Olympic medal, Australia is poised to add a second team in the new Olympic event.

It is awaiting confirmation of the withdrawal of a team from the Czech Republic.

Heading into the Games it appeared an obvious call, with reigning world champions Jarryd Hughes and Belle Brockhoff the top combination.

And while three-time Olympian Brockhoff, who finished fourth in the women’s event, is still the No.1 choice over teenager Josie Baff, the men’s entry for Australia’s top combination is more murky after completion of their racing on Thursday.

Hughes, who won a silver medal in the men’s event four years ago in PyeongChang, was off the pace, qualifying through the seeding round in 28th spot.

He was then eliminated in the first final, later admitting he preferred racing on a bigger Olympic course, in terms of jumps.

The 26-year-old had a troubled lead in to Beijing, requiring ankle surgery and cortisone injections in order to compete.

Fellow triple Olympian Cameron Bolton was the best of the Australian men, qualifying eighth fastest and then winning his 1/8 final before being overrun to bow out in the quarters.

Adam Dickson also presented a case for selection, qualifying in 15th spot, although he also didn’t progress beyond the first round of racing.

The last Australian remaining is eliminated 😞

Cam Bolton narrowly misses out on moving through to the semi finals.#Beijing2022 | #7Olympics pic.twitter.com/YZ8bObbH0Q

Bolton said he wasn’t sure on how the team combinations would be decided, but hoped to be competing.

He said past results as well as form this week would likely be taken into consideration.

The teams, who complete a timed relay, start at the quarter-final race so only have to win three races to take gold.

“It seems like it might have changed a bit over the last 48 hours,” the 31-year-old Bolton said.

“I’ve done everything I can.

“Whatever riders are put forward I’m sure they will represent Australia really well and we’ll have one or two teams who are both really good chances at success.

“If that’s mean great then I will be racing and if it’s not I will be cheering.”

Bolton said Brockhoff had shown great form to get to the final and finish fourth.

“It was a difficult day for her – she’s such an incredible rider and she’s really strong,” he said.

Investment trusts that have been around for more than 70 years

Investment trusts that have been around for more than 70 years