Series sets new record for Korea on US Netflix 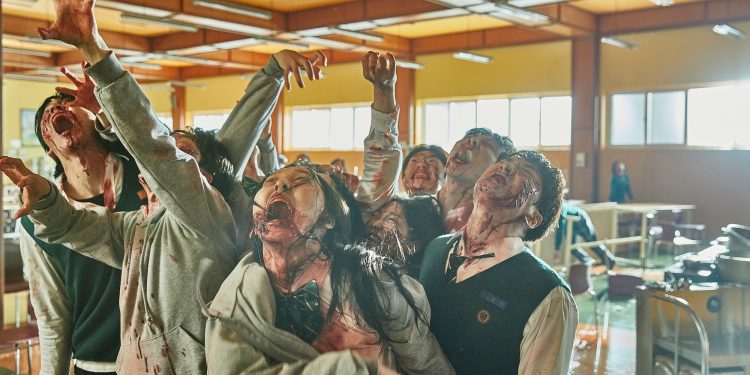 
The new zombie K-drama All Of Us Are Dead has helped South Korea set a new record on Netflix in the US.

Based on the webtoon Now At Our School by Joo Dong-geun, the series follows a group of high school students who find themselves trapped on campus as a zombie apocalypse spreads like wildfire.

After previously topping the charts on Netflix in over 25 countries by January 31, All Of Us Are Dead has now reached the summit of the daily Top 10 list on US Netflix (February 4). As the second non-English-language series to reach that position, the K-drama has helped set a new record for South Korea.

Thanks to the success of Squid Game and All Of Us Are Dead, Korea is now the first country to place multiple series not in the English language at the top of the streaming service’s charts, according to Deadline. The zombie series took the top spot on its seventh day of release, while last year’s word-of-mouth hit Squid Game did so on its fourth day of release.

US viewership of K-dramas has risen by over 200 per cent between 2019 and 2021. Although no other Korean series has topped US Netflix’s charts yet, others have made it into the Top 10, including Hellbound and My Name.

In a three-star review, NME said of All Of Us Are Dead: “With some awkward high school romance here and a meta-reference to Train To Busan there, All Of Us Are Dead is, in essence, an outlandish, if average, depiction of the high school experience, in all its glory and peril, presented through the radical lens of an unforgiving zombie epidemic.”

Park Solomon, who plays Lee Soo-hyuk in the series, recently revealed the process behind the actors’ performances in the show. “We tried really hard to act like modern Korean high school students,” he said, pointing out that the show’s source material had first been released almost two decades ago. “Compared to 13 years ago when the webtoon was made, the culture of high school students is different now.”

Meanwhile, Netflix will release over 20 original Korean dramas and films this year, the platform confirmed in January in a promotional trailer. Among the slate is romance drama Twenty Five Twenty One starring Kim Tae-ri (The Handmaiden) and Nam Joo-hyuk (Start-Up), and UFO mystery series Glitch starring Vincenzo’s Jeon Yeo-been.