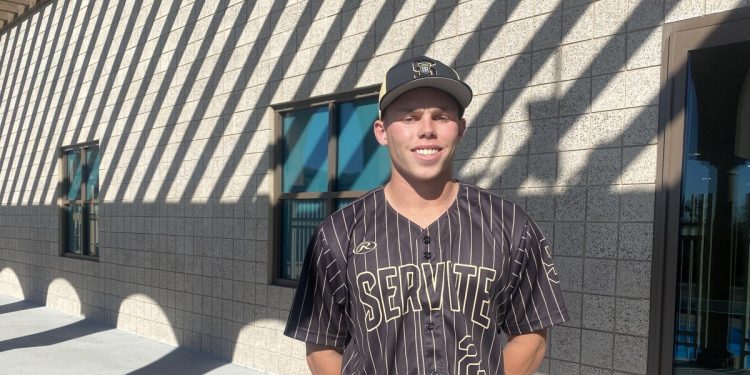 
Jarrod Hocking’s arms are linebacker thick even though he hasn’t played football since his freshman year.

“At Servite, we definitely get after it in the weight room,” the 5-foot-9, 180-pound senior center fielder said.

With those powerful arms, quick feet and uncanny hand-eye coordination, Hocking has discovered that baseball fits him perfectly. He entered this week batting .437 with 17 hits, nine RBIs and six extra-base hits as the leadoff hitter through 11 games.

He comes from a family where sports are worshipped and appreciated 365 days a year. His father, Denny, was a major leaguer for 13 years. His mother, Venetta, played basketball at Cypress College. His twin sisters, Penelope and Iliana, were soccer players at USC and Arizona, respectively, and set the stage for their younger brother to follow with passion and dedication.

“It fuels me,” he said of his family‘s sports success. “They would say, ‘We did this, we did that.’ It makes me excited. It makes me want to compete.”

Having committed to UCLA, Hocking should have received some ribbing from Penelope, the USC sister, right?

“She just said, ‘Don’t date anybody on the UCLA soccer team.’ Those were her only words,” he said.

He credits his father for teaching him lessons about baseball but insisted Denny likes staying in the background.

“I’ve worked with him a lot over the years, understanding my body and the mental side of competing,” he said. “He’s always watching.”

If there’s one characteristic that should come in handy as Hocking climbs the sports ladder, it’s his ability to treat pressure moments as just another moment.

“I never get nervous,” he said.

That means he’s the ideal player to be at the plate on a 3-and-2 count with a game on the line.

UCLA coach John Savage said, “Jarrod impacts the game with his bat and plays elite defense. He has tremendous baseball pedigree and a very bright future.”

Gilbert said tracking down fly balls is where Hocking has made a huge impact for the Friars. “It’s just amazing,” he said. “He covers more ground than anyone we’ve had. Against Santa Margarita, he had a game-saving catch when he dove.”

Last year was challenging for Hocking because of a hamstring injury that limited his effectiveness. He spent months focused on reaching a level of health that would allow him to show what kind of a player he is when nothing is holding him back.

Speed is a big part of his game, whether it’s running the bases, beating out ground balls or roaming the outfield.

Growing up, he played multiple sports. He’d attend practices and games of his sisters, learning what it takes to be successful at a high level.

At 18, he’s a teenager who knows what path to follow and it will be fun seeing the impact he makes along the way.