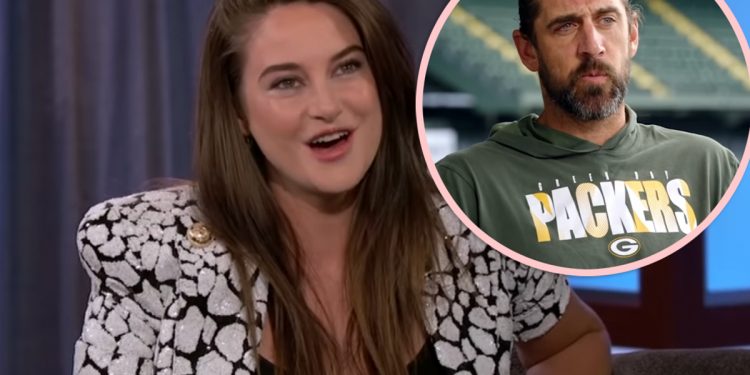 
Once again, Shailene Woodley and Aaron Rodgers are fueling reconciliation rumors, this time doing so at a PDA-packed visit to a California winery.

According to People, eye-witnesses spotted the (possible?) couple out together on Saturday at the Demetria Winery in Los Olivos, California. Shailene and Aaron reportedly sat at an outdoor wine-tasting patio table with a group of friends – and apparently, they were being “very affectionate” with each other at the time. A source told the outlet:

“They seemed really happy. [Shailene] was sitting on [Aaron’s] lap while they hung out at the table with friends. They kissed each other’s heads and were very affectionate.”

The duo has been spending more and more quality time together as of later, with the 38-year-old Green Bay Packers quarterback reportedly ready to give the relationship another try. Aaron and Shailene even went as far as to attend a wedding together for the NFL player’s teammate David Bakhtiari in Santa Barbara earlier this month. An Entertainment Tonight source spilled at the time:

“During the cocktail hour she lovingly patted his behind as she was seated and he was standing next to her and placed his hand around the back of her neck. On the way to the reception the pair was walking arm in arm as they made their way to the ballroom.”

Now, does this sound like two people whose relationship is on the rocks?!

Despite it looking like they are back together, People previously noted that The Secret Life of the American Teenager star did not seem too sure about reconciling at the moment, explaining:

“They both had intense work schedules in the fall and it wasn’t possible for them to focus on their relationship. Now when Aaron’s season is over, he wants to give it another try. He thinks Shailene is very special. She is more hesitant though.”

When it was revealed Shailene and Aaron broke up last month, reports came out saying the decision to part ways came down to their different interests and political views – which isn’t shocking given the athlete’s controversial comments about the COVID-19 vaccine. Even more so, it sounded like their busy work schedules got in the way of things. An insider told Us Weekly that Aaron had been focused “more on the sport than on future plans with Shailene.”

Those are some pretty big issues to move past, so it is understandable why the actress would be “hesitant” about starting things up again. But maybe they’ve talked it out? Or perhaps are working on it??? Who knows!

While Aaron and Shailene haven’t publicly addressed their reconciliation rumors, it might be safe to say that they are giving their love another shot! Between the PDA outings and his social media posts, there is no denying that something more is going on here with Shailene and Aaron!

Beckham hands over his Insta to Ukraine doctor