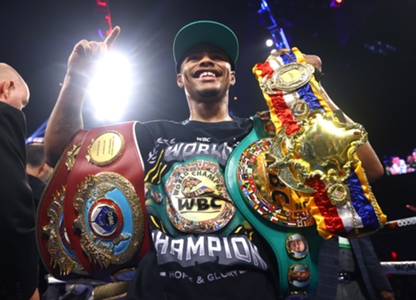 Valdez quickly lunges, trying to throw everything and the kitchen sink. He misses on nearly everything. Stevenson further frustrates him by shuffling around the ring. Too elusive. Ninety seconds remaining. Inside work highlighted by short, crisp output from Stevenson. Moments later, he shoulders Valdez and pierces him with two quick shots. Thirty seconds left. Valdez digs to the body in a last-ditch effort and Stevenson stings back with a right hook. Stevenson dances around the ring and flexes during the waning seconds. Valdez gives chase and comes up empty. What a dominating performance from Shakur Stevenson, who will walk out of Vegas with two titles in tow. (10-9 Stevenson, 118-109 Stevenson)

Stevenson doesn’t bother with a clinch and cranks up a winding left uppercut. Stevenson stings Valdez with an unanswered three-punch combo to the head, body and head. On the defensive end, he’s making a lunging Valdez miss — almost looking like a matador with a bull in the process. Ref Kenny Bayless warns Stevenson about resting out his jab. Stevenson is up so big that it shouldn’t be a problem to take heed. Stevenson obliging Valdez’s request to fight inside. Perhaps he wants to further the statement he’s making. Unless Valdez lands a knockout shot, this one should be easy to score for judges ringside. (10-9 Stevenson, 108-100 Stevenson)

Valdez working hard to rally but Stevenson covers up and defends well. How frustrating that must be for Valdez who got inside but couldn’t land anything meaningful. Valdez goes for a wild right hand and misses with Stevenson evading the shot smoothly. Stevenson lands a short left to the temple and then finishes a three-punch combination to the body. Valdez is landing to the body while seeking an equalizer upstairs. The latter attempts, he keeps missing. A much better round for Valdez, however, he’s down on the scorecards so much that he’s going to have to land a devastating shot to have any chance at this point. (10-9 Valdez, 98-91 Stevenson)

Valdez catches Stevenson in cramped quarters and digs three right hands to the WBO titleholder’s body. He needs more of that kind of output and fast because Valdez is behind on the scorecards. Left to the face lands flush, before Stevenson deposits another shot to Valdez’s body. Valdez is respecting Stevenson’s power more as he’s moving inside with caution. Stevenson potshotting Valdez and landing at will, especially with that left hand, which is connecting upstairs and to the body. Stevenson is pouring it on. (10-9 Stevenson, 89-81 Stevenson)

Stevenson loose in between rounds, taking heed to game being told to him by his corner. He has been producing a masterclass thus far. Valdez’s warrior grit is being stifled by Stevenson’s skills. It’s just that simple. Or at least Stevenson is making it look that way. Three-punch combination from Stevenson, who shows his speed is a level or two above Valdez’s. Valdez attempts and misses a left hook and Stevenson returns fire with a left hook of his own. Left hook to the body from Valdez lands. He’s trying to time a damaging left hook with more on it to make this fight a lot closer. (10-9 Stevenson, 79-72 Stevenson)

Stevenson is in firm control as he continues to punish Valdez behind that jab while eluding harm’s way. He catches a lunging, possibly desperate Valdez with a perfectly-timed uppercut. Seconds later, Valdez presses and this time connects. But Stevenson quickly bounces to the outside and scores on more jabs. An uppercut follows. Valdez pumping and connecting on a right hand as he closes off the ring. Good work from Valdez but not enough to snag the round. (10-9 Stevenson, 69-63 Stevenson)

Stevenson back to peppering Valdez with the jab. And he catches and drops Valdez, who seemed to be off balance. The knockdown shot came on a pinpointed right hook from Stevenson.

Valdez is back on his feet and the fight resumes. Stevenson is picking up the aggression, piecing power punches together behind that jab. He’s stalking Valdez now. Brilliant stuff from Stevenson. Valdez is sporting a cut under his right eye and his face is reddened from Stevenson’s sharp output. (10-8 Stevenson, 59-54 Stevenson)

Stevenson has thrown 120 jabs through the first four rounds and enters this fifth frame using the same weapon of choice. Valdez pushes his way into the phonebooth and throws everything wildly with bad intentions — coming up empty on most of the attempts. Stevenson calculates well and counters with a stiff reminder. His range-finding jab is spawning some clever combinations now. Valdez once again closing the distance and coming up empty. He’s also getting hit while coming in. Big left hand lands for Stevenson who measures and catches Valdez as he’s coming in. Stevenson’s high ring IQ on full display here. (10-9 Stevenson; 49-46 Stevenson)

Valdez is working diligently to get inside and is reaching paydirt for his grind.

Stevenson back outside to his comfort zone and he’s peppering Valdez with stinging, crisp shots. Be clear that Stevenson is scooping up points like this. Valdez lunges forward and crowds Stevenson’s space but misses most of his output. Stevenson digs to the body and goes upstairs on Valdez. Stevenson checks with ref about Valdez’s movements but the official tells him to keep fighting. (10-9 Stevenson, 39-37 Stevenson)

Stevenson is the bigger man in the ring and Valdez pops the right-hand jab, daring his younger opponent to bring the fight to him. Seconds later, Valdez stalks and misses with Stevenson making him pay with a counterpunch. Again, Valdez goes to the body and lands but Stevenson makes him pay with a left hook across the jaw. Valdez is increasingly cutting off the ring now and hitting Stevenson’s body. Splintering right through Stevenson’s guard from Valdez. Ref warns Stevenson for a low blow. Valdez pulls off his best round yet. Busy, grinding work from the WBC champion and all-around warrior. (10-9 Valdez, 29-28 Stevenson)

Another three-punch combination peppers Valdez. Stevenson is essentially executing target practice. Meanwhile, Valdez is pressing and coming up empty. Just as that was said, Valdez presses to the body and finds a bit of success, cutting off the ring and landing a shot. Valdez needs to do a lot more of that to close the gap on Stevenson and the WBO titleholder’s superb boxing skills. (10-9 Stevenson, 20-18 Stevenson)

Oscar Valdez vs. Shakur Stevenson; Round 1

Crisp left jab lands on an off-balance Valdez. Moments later, Stevenson flicks out the right jab as a temperature gauge before splitting Valdez’s guard with a left hand. Stevenson’s left is already finding a home. Valdez presses and Stevenson moves slickly out of harm’s way. Elusive movement. Left hand to the body followed by a right upstairs. Three-punch combination connects for Stevenson. Sharp first round for Stevenson, who flashes those dazzling boxing skills and ring management early. (10-9 Stevenson)

Stevenson led out by DaBaby

A coin toss determined who would come out second and Stevenson won. The WBO titleholder looking loose, yet laser-focused. This Vegas crowd is pro Valdez.

The WBC champion is looking like a quiet storm before the fight.

Main event up next

Oscar Valdez, with his steely determination and grit, puts his WBC junior lightweight championship on the line against the pure boxing skills of Shakur Stevenson with the Newark, New Jersey product’s WBO title up for grabs as well. Who’s going to take it? We’re about to find out. However, we know who Saul “Canelo” Alvarez is pulling for. His stablemate, Valdez, of course.

Davis continues to impress! The future is bright for Davis and Ali Walsh.

Davis is all business

Davis in firm control through three

Davis is living up to his nickname, going about dismantling Sanchez methodically. He’s wrapping that left hook around Sanchez’s guard seemingly at will.