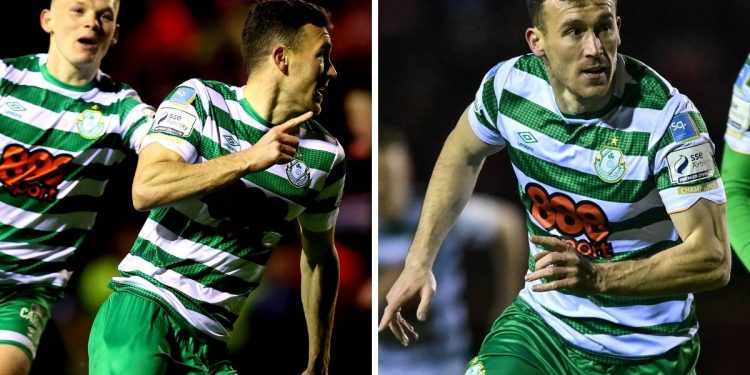 
AARON GREENE brought out his sledgehammer to smash through Shelbourne after Shamrock Rovers’ lock-picking efforts were frustrated.

Not long after he was introduced, Hoops striker Greene scored a belter in the last minute to earn all three points from a game that looked in danger of drifting away from Rovers.

They led early through Andy Lyons and were totally in control for most of the first hour without adding a second.

It meant Shane Farrell was able to produce a smash-and-grab equaliser.
With so much time left, the travelling Hoops fans in Tolka Park would have expected to see their side go again.

Yet as the minutes ticked by and Danny Mandroiu, Dylan Watts, Neil Farrugia and Greene all came on, the sides remained deadlocked and Brendan Clarke’s goal stayed untroubled.

But then Greene picked up the ball just outside the area after a nice patient build-up, turned inside and blasted home with a left-foot hammer of a shot.

The Rovers staff and substitutes all spilled on to the pitch in celebration as they claimed three precious points.

Even at this early stage of the season, it could be crucial given Derry City’s good start and their habit of scoring late goals.

Last season, it was the Hoops who were the late, late show stars with winners three times against Longford, once against St Pat’s and once against Drogheda in the final minutes.

And just when they needed it again, Greene reprised the trick last night in front of the 800 travelling fans in the Ballybough end.

Had the Hoops left Tolka with just one point, it would have felt like two dropped after being in control for so long against a team they knew was struggling for goals.

Only bottom side UCD had scored fewer than Shelbourne’s five through the first eight games of the season, and keeping it tight was going to be crucial for them.

Instead, they were behind after just 100 seconds.

Left wing-back Lyons hit the goal trail last week with two at Finn Harps and he grabbed another here with a finish from the edge of the area after being set up by Richie Towell.

Shels’ defending left a lot to be desired as Jordan McEneff lost possession in his own half in the build-up, and there were four red shirts around Lyons when he slotted home.

Despite that shocking start, Shelbourne’s defenders then did a fine job against a Rovers side that were dominating.

There was one occasion when wing-backs Ronan Finn and Lyons almost combined in the D on the edge of the Shelbourne area.

That the ball to them was from centre-half Lee Grace standing just a few yards away highlighted how complete the Hoops’ siege was at times.
Yet, for all their visitors’ possession, Shels held firm.

Graham Burke had a shot saved by Clarke and then flashed another just over from a Finn cut-back.

Opinion: Stock buybacks are Washington's latest public enemy --- even though they're good for shareholders