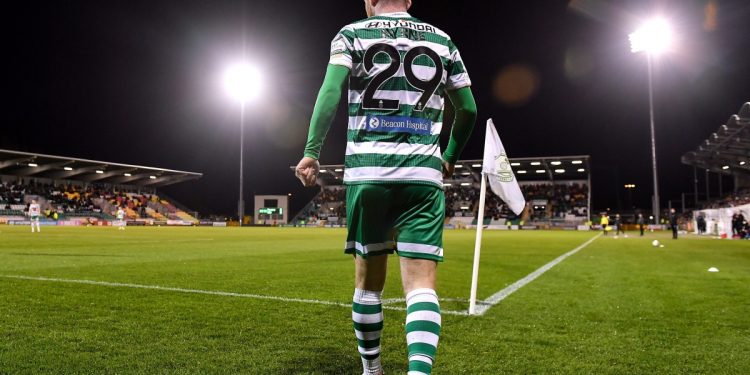 
GARY O’NEILL reckons Shamrock Rovers’ “little man” Jack Byrne can have them standing over every other side again this season.

The Hoops kicked off their three-titles-in-a-row bid on Friday night with a 3-0 win over UCD, with Byrne providing the assists for the opening two goals.

His return to Tallaght this season strengthens the Hoops, and O’Neill — who also played alongside Byrne during his previous spell with the club — reckons he is even better now.

O’Neill said: “That’s why the little man comes in and he’s magic. He just opens up teams.

“The ball for Danny (Mandroiu, for Rovers’ second goal), one off the cuff and he just spins and puts a ball in and suddenly we’re two up and quite comfortable.

“Whereas last year, we might have struggled with breaking teams down. He’s magic, I can’t say enough about the man. He’s probably more mature now, he’s working so hard off the ball — I’ve never seen him run as much!

“When he’s on the pitch, even for me behind him, he makes me a better player because you can give him the ball in tight positions and he makes you better.

“We’re lucky to have him again.”

BETTING SPECIAL – GET €50 IN FREE BETS WITH BOYLESPORTS

Rovers were made to work by the Students, particularly in the first half but two goals in six minutes before half time gave them breathing space.

And O’Neill reckons there will be a lot of games like that this season — he pointed to the three times they needed injury-time winners against Longford as how it happened last year.  But he also believes the strength in depth at Rovers can be a factor in grinding opponents down, while also keeping him on his toes.

He said: “Never mind games, during the week…we always have a tough training session on the Monday and you need to be on it.

“Otherwise you’ll find yourself disappointed on Thursday when the team goes up.

“If you’re not seven or eight out of ten and your levels aren’t where they’re supposed to be, there’s going to be someone ready to take your place.

“It was like that last year but probably lifted more this year with Jack and Andy (Lyons) coming in.

“When you see the likes of Richie Towell, Graham Burke, Aidomo Emakhu just to name a few to spring the bench you know the quality we have.

“The manager has so many options to spring and liven things up.

“The squad is so good, it’s the way you want it to be. If you’re going to be three-in-a-row, that’s how you’re going to have to train and play every week.” O’Neill was one of the star turns on Friday as  holding midfielder as, after UCD twice threatened on the break through Liam Kerrigan, Rovers seized control.

And, while O’Neill reckons Byrne et al are the ones people pay to watch, he knows it will only work if he and the defence can keep teams out.

“We’re so open and have so many good players in the final third that teams might see a chance to break against us quickly.

“I speak to Glenn Cronin (Rovers’ assistant) all the time about being disciplined and central at times.

“I try to batten down the hatches and let Dylan (Watts), Jack (Byrne), Burkey (Graham Burke), Danny (Mandroiu) do what they’re doing in the final third because that is going to win us the league.

“But Joey (O’Brien) was here last year and he was saying clean sheets win leagues and that’s what me, Pico (Roberto Lopes), Lee (Grace), Seán Hoare, Seán Gannon, Barry (Cotter) pride ourselves on.”