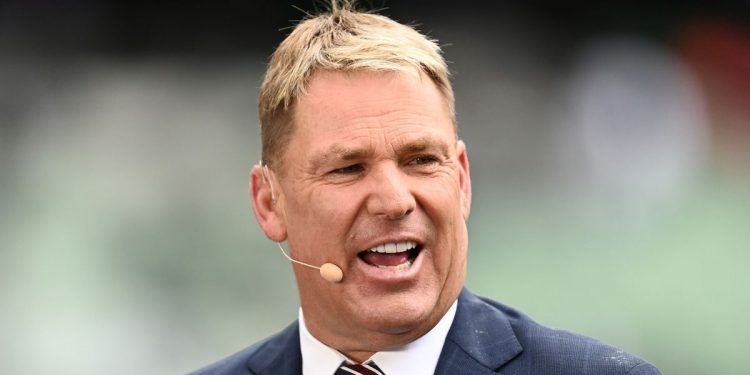 
The family of cricket legend Shane Warne paid tribute to him as friends, celebrities and those closest to the star gathered to bid him farewell.

The sporting icon passed away earlier this month following a suspected heart attack and he was aged just 52 when he died.

The Australian sport star leaves behind 52-year-old ex-wife Simone Callahan, who he was married to from 1995 to 2005, and their three children; 23-year-old son Jackson and daughters Brooke, 24, and Summer, 20.

Emotional scenes were captured as Shane’s family and friends watched a procession at St Kilda Football ground in Melbourne on Sunday.

His son, Jackson, was seen affectionately kissing the coffin of his late father as the procession ended, while the Tina Turner classic song The Best played in the background.

Shane’s coffin was draped in a St Kilda Saints scarf, while Jackson, Shane’s brother Jason and other carried the star’s coffin during Sunday’s service.

The sport star’s youngest daughter, Summer, was in tears as the service came to an end, while his oldest daughter, Brooke, watched from behind a pair of sunglasses.

Other music that was played during the intimate funeral included (I’ve Had) The Time of My Life by Bill Medley and Jennifer Warnes from the 1987 film Dirty Dancing, and Fix You by Coldplay.

Those in attendance raised glasses as the hearse drove Shane’s coffin around the grounds.

Celebrities including Dannii Minogue, Michael Clarke and Merv Hughes were in attendance, joining the Warne family as they paid their final respects to the sport star.

Former fiancée Elizabeth Hurley had already explained that she was sadly unable to attend Sunday’s ceremony as work commitments kept her away from Australia.

Sharing a string of photos of the star on her Instagram page on Saturday, the heartbroken actress wrote: “My heart aches that I can’t be in Australia tomorrow for Shane’s funeral.

“I was filming last night and, with the time jump, physically can’t get there. These pictures were taken in Sri Lanka to celebrate our engagement- we had all our children with us and it was the happiest time.

“It still hasn’t really sunk in that he’s gone. It seems too cruel that all the people who loved him will never have another Lion hug, but our memories will live forever.

“RIP Lionheart, with love your Luna.”

The sporting world was shocked on March 4 when it was revealed Shane had suddenly died after arriving in Thailand with friends for a holiday.

Reports later confirmed the star had died of natural causes.

Victorian premier Daniel Andrews revealed soon after the death that the sport star would be given a state funeral at the Melbourne Cricket Ground later this month.

He tweeted: “There’s nowhere in the world more appropriate to farewell Warnie than the ‘G.”

The state funeral is expected to take place on March 30.