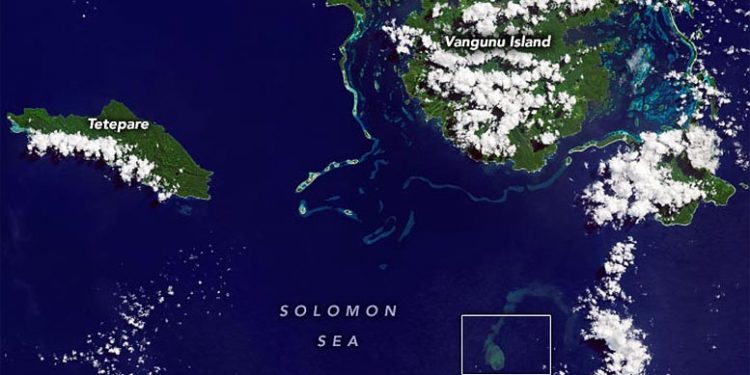 May 14, 2022. A plume of discolored water being emitted by Kavachi Volcano.

The Solomon Islands’ Kavachi Volcano is one of the most active submarine volcanoes in the Pacific Ocean. According to the Smithsonian Global Volcanism Program, the volcano entered an eruptive phase in October 2021. Now, satellite data shows discolored water around Kavachi on several days in April and May 2022.

The image above, acquired on May 14, 2022, by the Operational Land Imager-2 (OLI-2) on Landsat 9, shows a plume of discolored water being emitted from the submarine volcano, which lies about 24 kilometers (15 miles) south of Vangunu Island (shown below). May 14, 2022. Kavachi Volcano, which is about 15 miles south of Vangunu Island, emitted a plume of discolored water.

The presence of the sharks in the crater raised “new questions about the ecology of active submarine volcanoes and the extreme environments in which large marine animals can exist,” the scientists wrote in a 2016 Oceanography article, “Exploring the ‘Sharkcano’.”

Prior to this recent activity, large eruptions were observed at Kavachi in 2014 and 2007. The volcano erupts nearly continuously, and residents of nearby inhabited islands often report visible steam and ash. The island is named for a sea god of the Gatokae and Vangunu peoples, and it is sometimes also referred to as Rejo te Kvachi, or “Kavachi’s Oven.”

Since its first recorded eruption in 1939, Kavachi has created ephemeral islands on several occasions. But the islands, up to a kilometer long, have been eroded and washed away by wave action. The summit of the volcano is currently estimated to lie 20 meters (65 feet) below sea level; its base lies on the seafloor at a depth of 1.2 kilometers (0.75 miles).

Kavachi formed in a tectonically active area—a subduction zone lies 30 kilometers (18 miles) to the southwest. The volcano produces lavas that range from basaltic, which is rich in magnesium and iron, to andesitic, which contains more silica. It is known for having phreatomagmatic eruptions in which the interaction of magma and water cause explosive eruptions that eject steam, ash, volcanic rock fragments, and incandescent bombs.

Luka Doncic, Dallas Mavericks eye another playoff shocker after avoiding sweep by Warriors – Going to believe until the end – ESPN