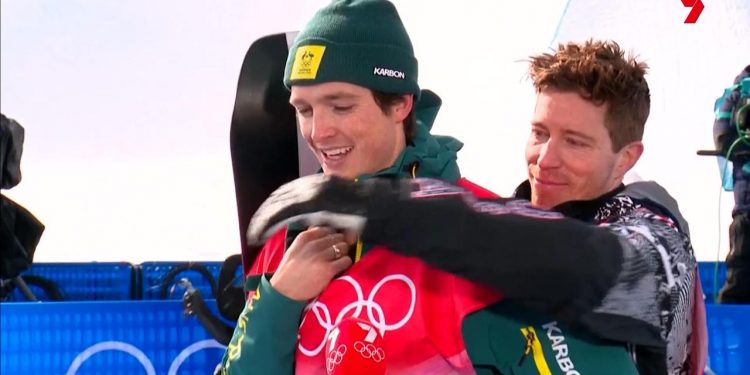 
The Olympics has farewelled the GOAT in incredible fashion.

Shaun White, a five-time Olympian and arguably the greatest snowboarder in history, was in tears as he received a standing ovation following his final run in the halfpipe final on Friday.

And he broke down again in a touching interview alongside long-time rival, Australia’s silver medallist Scotty James.

White finished fourth by 2.25 points after crashing out in his third and final run, while James was beaten to gold by Japan’s Ayumu Hirano.

The American great removed his helmet and hoisted it aloft as the crowd cheered his slow glide to the bottom of the course for the final time.

“That’s it,” White could be heard saying.

Minutes later, he and James both broke down in a touching shared interview on Channel 7.

James said: “I have had such great time here in Beijing. This has been such a special Winter Games. This guy is very, very special.

White said: “(I’m) trying not to cry in the background.”

James was then asked: “how important this guy’s been for the development of your sport?”

He replied: “Well, it’s OK to be upset, because I just about starting crying myself. I have never expressed it. To Shaun, obviously huge respect to him. The guy is the GOAT.”

“Thank you,” a choked-up White replied.

“What I have never said before, it’s a really tough and interesting situation where you come up against a guy like Shaun White who I looked up to when I was younger. And I aspired to no doubt be like you. There’s this level where I get to where I become competitive.

“I have got, I have a lot of respect for him. But as a competitor, I almost have to get rid of the respect because we’re both out here. That’s been an amazing journey to feel that emotion. And watch him do this thing, (and) me then becoming rivals with him.”

As an emotional White went to reply, James continued: “No, man I’m honestly … It’s been incredible to be here with you. Yeah. And PyeongChang and (the rest). All the best!”

White said: “I didn’t picture it any other way. I was like I would have done the same! I’m so proud. I mean, even in qualifying, they are asking me about my favourites and you have been on my heels every step of the way. I’m … Sorry, it’s been an emotional … I’m proud of you, man.”

“Appreciate it,” the Aussie answered.

White then praised James’ silver-medal-winning run: “Crushed it! I was seeing the switch back doubles to the deck … I was like, come on! You are just crushing them effortlessly. To see you throwing down is just awesome.”

Then Australia’s hero asked his long-time rival for support in his campaign to compete in 2026, saying: “If you have the time, I have one more medal I need. If you want to help!”

White laughed as he replied: “I will back you!”

After White finished his final run, rivals lined up to farewell the legend of the sport.

The 35-year-old, whose three Olympic golds (2006, 2010, 2018) are the most of any snowboarder, also boasts a record 13 X-Games gold medals in snowboarding plus another two in skateboarding.

Having undergone two open heart surgeries before turning one, White was mentored by legendary skateboarder Tony Hawke and turned professional in that discipline as a 16 year old.

He became the face of US winter sports and of snowboarding around the world, inventing a number of tricks in the halfpipe competition including a trademark Tomahawk which he deployed again in Beijing.

Nicknamed the ‘flying tomato’ for his flaming red locks, White was the first to pull off a double cork in the halfpipe – tricks requiring two off-axis flips in addition to spinning – by landing three different variations in the space of two weeks of practice at a specially-built facility in 2009.

In the Vancouver 2010 Olympics, he landed three double corks – including the Tomahawk, a double McTwist 1260 – in the statement victory of his career.

That sensational run came after he had already guaranteed gold with an earlier run. It was a victory lap for the ages, and set the sport on a path of stunning development over the next decade.

Rivals tried to catch up to White, whose poor preparation and mistakes in competition saw him slump to fourth in 2014. But in PyeongChang, he again returned to the peak – delivering a trick that nearly killed him months earlier.

A cab double cork 1440, or YOLO flip, had left him with 62 stitches in his face and five days in intensive care after a training crash in New Zealand.

White had completed two back-to-back 1440s of his own in his second run – a combination he had not even practised – before failing at the YOLO flip.

Sitting behind Hirano before his third run, White nailed the combination and the staggeringly difficult trick to snare his third gold medal.

He took a break from the sport and unsuccessfully attempted to qualify for the Tokyo 2020 Olympics in skateboarding, founded his own snowboarding gear company, battled Covid-19 and injuries, before making a last-ditch attempt to qualify for these Beijing Games.

While he did not garner another medal, he departs a legend who defined his sport and the Olympics themselves.

He told Channel 7: “You know, it’s hard for me to not get hung up on that last run. I wanted it so badly and I don’t know why, my leg was just giving out during my runs. I just … maybe it was the pressure, maybe it was just exhaustion and the nerves getting to me, but I’m proud of the runs I put down, and I’m proud to be here for my … my … my final goodbye.”

With his voice breaking, he continued: “So thank you. Thank you to everybody watching. All my friends back home. Thank you, snowboarding. It’s been my life.”

And he shared some teary-eyed gratitude for the kindness of his competitors, saying: “Some very kind words from the competitors at the end there. You know, I try not to … I’m not susceptible to flattery, but you know, they were so kind and a lot of them patted me on the back and showed me the tricks in the sport wouldn’t be where it is today without my pushing it, and I wanted to say thank you to them for having me, supporting me, and … letting me do my thing. Thank you.”