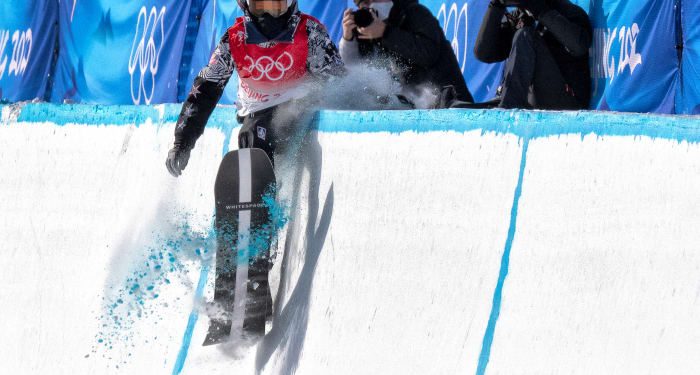 
ZHANGJIAKOU — When it was all almost over, before his voice cracked and his eyes welled as red as his racing bib, Shaun White stood near the bottom of the halfpipe at Genting Snow Park, soaking up the scene. It was a private, peaceful moment, away from the cameras angling for shots and the volunteers clamoring for selfies, just White and his snowboarding coach and his physical therapist and the coming end of his career.

“One more,” he said, jiggling his legs.

“One more,” he said, stretching his arms.

“You got more in the tank, baby,” U.S. snowboard coach Mike Jankowski hollered as White walked toward the rope tow. “Let’s do it.”

What happened next was not how White had hoped his last Winter Olympics run would go, at least not in his wildest, Hollywood-style fantasies. Soaring above hundreds of fans, reporters and fellow athletes there to witness his swan song, the 35-year-old legend clipped the edge of the pipe while trying to stick his second trick, a cab double cork 1440, and tumbled on his butt in a puff of powder. Rather than finish out the run, he stood up, doffed his helmet and cruised down the mountain with the sun at his back, smiling and listening to the roars.

“It was harsh to fall in that run and not just nail it and hop on the podium,” said White, who ended up fourth, narrowly missing out on bronze by 2.25 points. But, he added, “No, there’s no agony. There’s just happiness. … As sad as I am to say goodbye, I’m so relieved.”

He was relieved because of how hard he had worked to get the chance to defend his 2018 gold medal, fighting both injury and Father Time for the third and final spot on the U.S. team behind Taylor Gold (fifth in Beijing) and Chase Joey (seventh). Then came the difficult decision that this would be his last Olympics, regardless of the outcome, and the clutch third run in Wednesday’s qualifying that saved him from an early curtain call. And the outpouring at the realization of what that all meant. “The emotions are way more intense,” his longtime physical therapist, Esther Lee, said before the last run. “He’s keeping it together as best as he can.”

He was relieved because he is leaving behind what was once a “pretty misunderstood” sport in unprecedentedly talented hands. The boarder who went before him during Friday morning’s final, Australian teenager Valentino Guseli, was still in diapers when White captured first gold at the 2006 Turin Games. The eventual gold medal winner, Japanese sensation Ayumu Hirano, became the first person to land a frontside triple cork 1440 at the Olympics, not only discovering snowboard’s holy grail but filling it with victory champagne and slurping the whole thing dry.

“Everyone was asking me about what my legacy in this sport has been, and it’s like, you’re watching it,” White said. “These younger riders, they’ve been on my heels every step of the way, and to see them finally surpass me, I think, is deep down what I always wanted—to be beaten, to finally walk away without feeling like I could’ve done [more].” The respect was returned in kind, with Hirano, silver medalist Scotty James (Australia) and others embracing White with bear hugs and compliments at the end of the competition. “He means a lot,” bronze medalist Jan Scherrer of Switzerland said. “Everyone else grew up watching him.”

White spent the next hour-plus inching through the mixed zone, stopping at every camera stall to give versions of the same answers. He was glad in some ways that he had gotten fourth, because “if I would’ve hit the podium, I would’ve wanted second, and if I got second, I would’ve wanted first.” He felt pride at his Olympic halfpipe accomplishments, because winning “three out of five’s not bad.”

He shared the prevailing thought in his head: “This is the last time I’ll be at a competition stressed out about what points I’m going to get, or today’s the day I might help myself trying to push the envelope. It’s hard to wake up every day since you were a kid and go, ‘Wow, I’m going to do something really scary today, and hope I’m okay.’” He said that he would have to call fellow retiree Tom Brady and ask, “What are you going to do now? What do we do now?”

He expressed a desire to stick around in the sport, perhaps as a mentor for the boarders ready to build their own legacies. “I don’t want to beat these guys anymore,” White said. “I want to sponsor them. Not to sign them, but to help their careers, to help guide with my experiences and what I’ve learned.” He brought up the late snowboard maker Jake Burton and broke down in tears. “I think he would’ve given me a big hug and said how proud he was,” White said, “And, ‘Enough’s enough. … It’s time to turn that page and open the door on what’s next.’”

His legs ached from standing so long. His throat throbbed from talking so much. But he was still smiling, grateful for all snowboarding has given him, content with all he has given it in return. It was similar to the scene before his final run as he stood next to Lee and Jankowski, clapping and cheering on the competition—the future—rather than fretting about his final run.

“One more run in my life,” he had said then, smacking his board on the snow in anticipation and heading for the tow. He fastened his bootstraps. He hooked into the winch. He rode up the mountain, up into the glistening sun, up to the beginning of the end.