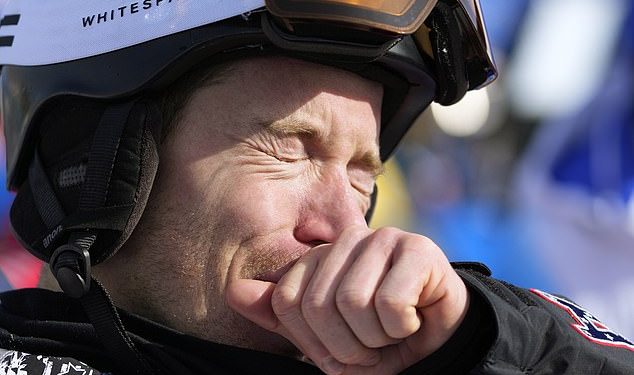 
Shaun White bowed out of the Olympics for the last time with a tear and without a medal and kissed goodbye to the sport he had dominated for twenty years.

The All-American hero went into his bid for a fourth Olympic gold with a loving good luck message from actress girlfriend Nina Dobrev.

She posted a picture of her with the athlete to her 25 million followers with the message: ‘Did I mention I already won gold with you? Show ’em how it’s done you f—— stud.’

White, 35, of San Diego, CA, who describes his girlfriend as a ‘Hot Mess’ is expected to marry the star of The Vampire Diaries now that he is putting away his snowboard forever.

He wiped away a tear as the adoring international crowd cheered him for what everyone knew was the last time at the Olympics and was hugged by opponents. 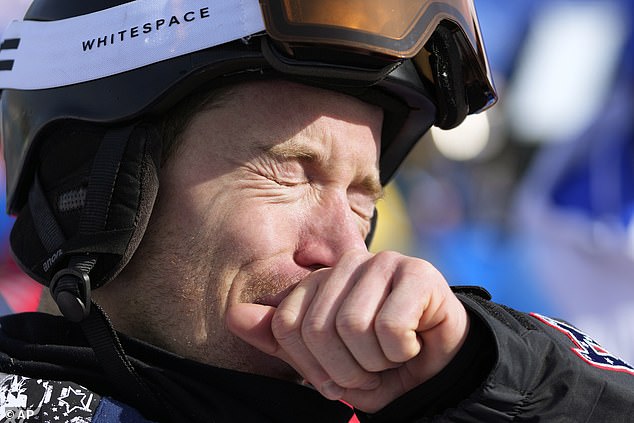 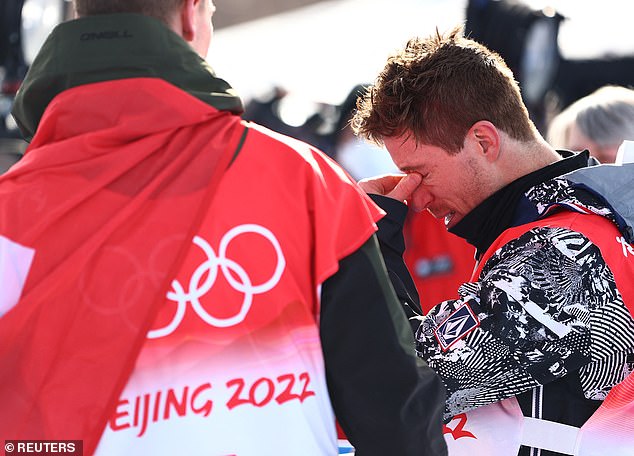 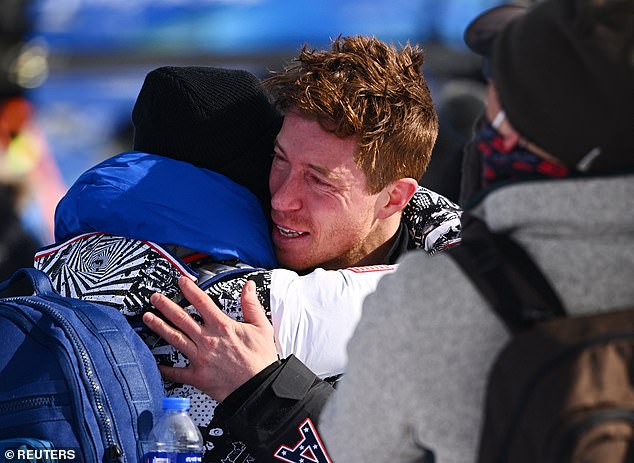 White, 35, had previously announced that the 2022 Winter Olympics would be his last 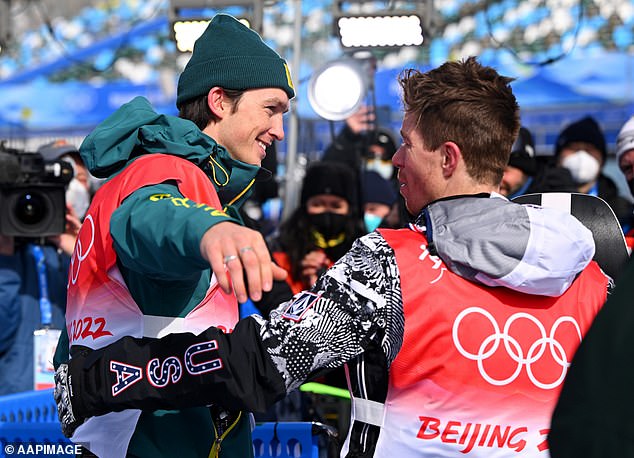 White, 35, right, was hugged by Scotty James of Australia, who won silver

Today he went into his final run having finished fourth in the first two jumps, but stumbled at his final attempt and the bid for a fourth gold was doomed.

The winner was Japan’s Ayumu Hirano who had to settle for silver against White in South Korea. 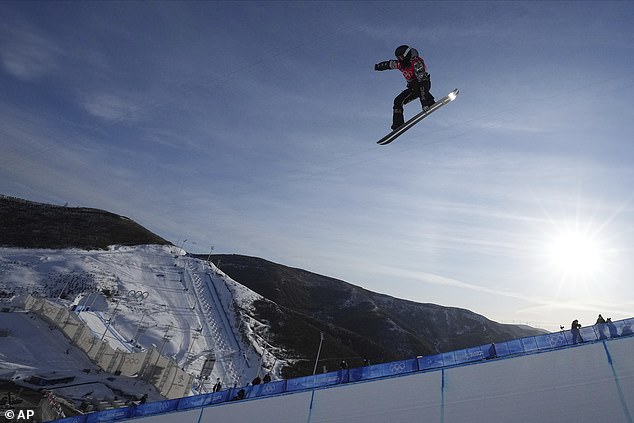 White finished fourth with a best score of 85.00 and the US snowboarder Taylor Gold, 28, of Steamboat, CO, was fifth with 81.75. He is seen here training before the finals on Friday 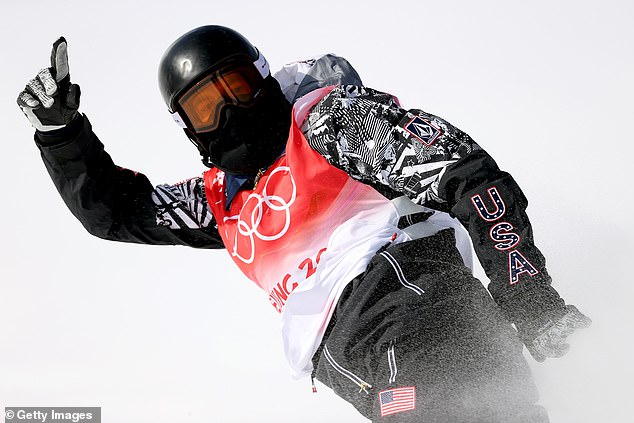 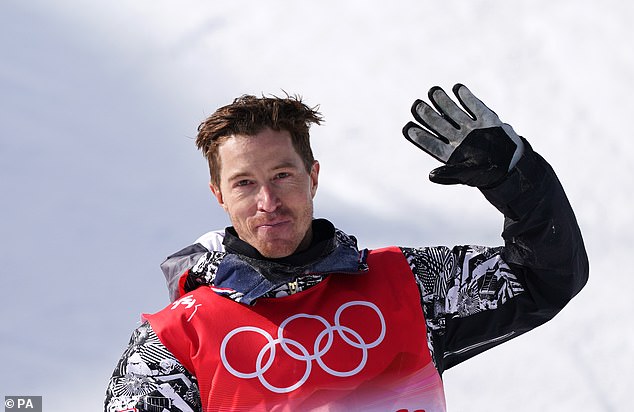 The snowboarding superstar appeared to enjoy the competition following his loss

The snowboarding superstar appeared to enjoy the competition and congratulated the members of the next generation who had taken his crown.

And the veteran TeamUSA halfpipe athlete even found time to pose for a ‘selfie’ picture with a fan in the crowd, following his second run.

White executed a brilliant routine including his patented ‘Double McTwist 1260’ and then a frontside 1260. But it was not enough to surpass even finer acrobatic displays by Hirano and James.

Asked if he had been inspired by White, Valentini Guseli of Australia who finished sixth, said: ‘100%. Shaun White has been one of the biggest faces in snowboarding my whole life.

‘To see him dropping into his last Olympics was really awesome. To watch him one last time and when he got to the bottom I got a bit teary just to see the legacy that he’s leaving behind. 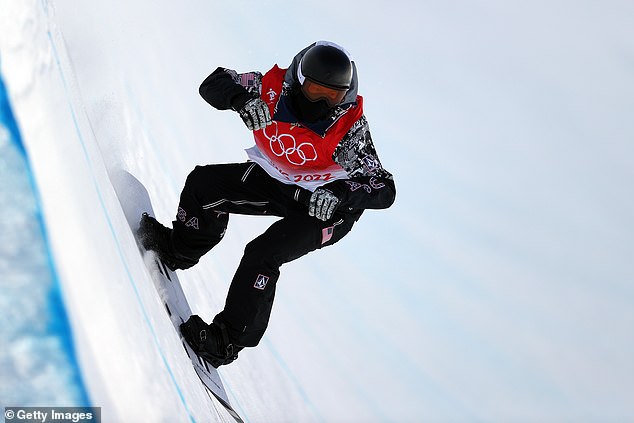 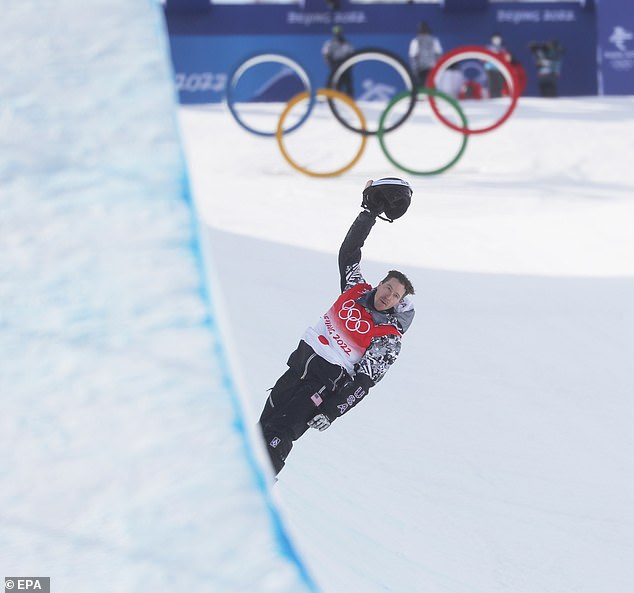 White told reporters: ‘The future for me is so exciting, there’s so much I want to do in my life. So much to do, so much to live for, this is just the beginning for me’

White told of his pride at representing USA but said it was now time to retire.

He said: ‘This is it for me. I’m so thankful to be here and so proud.

‘I wish I could have landed my last run, but I was having some difficulty in my back leg for some reason, it was giving out on every run, I don’t know why.

‘Really challenging, but that’s OK, that’s it, I’m done. I’m so thankful for my career, thankful to China for having us.

‘It’s been a journey, I’m just so happy, and thank you all from the bottom of my heart,’ he said as he choked up with tears.

‘A lot of emotions are hitting me right now, the cheering from the crowd, some kind words from my fellow competitors at the bottom, I’m so happy,’ he said between tears.

‘Snowboarding, thank you. It’s been the love of my life.

‘It’s been a journey. I can’t wait to see where this sport goes.

‘I’m so happy for Ayumu, to watch him nail that run. Incredible, I’m proud to stay here and cheer him on from here. I wish him and Scotty all the best.’

The Olympic legend broke down in tears when he was asked to talk about failing to make the podium.

He said: ‘Sorry you’re going to get me ugly crying here, but I’m not upset about the result.

‘I would have loved to put it down. I made it happen for two runs and I couldn’t hold on for the last.

‘It’s hard for me not get hung up on that last run, I wanted it so badly.

‘I’m proud of the runs I put down, I’m proud to be here for my last goodbye.

‘Just missed the podium, I would have loved to walk out there with everyone, for one last time but you can’t always get what you want, you get what you need.”

White claimed that the Pyeongchang 2018 Olympics had been the highlight of his career but said he was pleased to have come to Beijing 2022.

He said: ‘I was pretty happy with my last Olympics (he won gold at PyeongChang 2018), I was going for that comeback and I wanted it so badly, one more run to go and I nailed it. That was the highlight of my career.

‘To get this bonus round, to be here, see these young guys competing, it’s been such an enjoyable process and truly thankful to be here and still competing and even getting fourth. I’m proud of it.

‘The future for me is so exciting, there’s so much I want to do in my life.

‘So much to do, so much to live for, this is just the beginning for me.

He added: ‘All my fellow competitors were so kind, a lot of them patted me on the back and told me that the tricks in the sport wouldn’t be where it is today without my pushing and I want to thank them for having me and supported me and let me do my thing.’