Shell posted losses of £14.7billion two days after BP recorded a £13billion loss and US rival ExxonMobil plunged £16.3billion into the red. 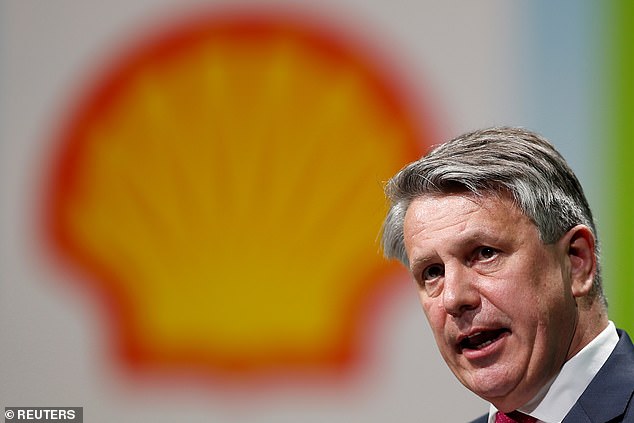 The losses from Shell and BP go down as some of the largest in UK corporate history, although they are still some way behind the £24billion loss Royal Bank of Scotland recorded in 2009 during the financial crisis.

Analysts at Bernstein said Shell’s refining arm was to blame after the company cut back on production.

But there were also heavy writedowns on its oil assets during the year as the company looks to shift from fossil fuel to renewables with a goal of net-zero emissions by 2050. 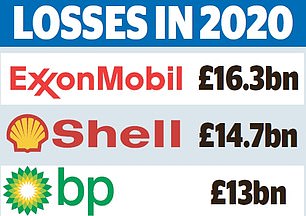 Shell is pursuing a different green energy strategy to BP. The company already operates the biggest natural gas trading operation in the world and intends to double down on its market expertise rather than join the scramble for renewable power assets.

Shell is due to unveil a strategy update next week with more detail on its low-carbon investment plans.

But some investors remain concerned by the lack of money being pumped into new oil projects as global prices have started to recover with Brent crude at $58 per barrel.

The results show Shell invested £13billion in new projects in 2020, £4.4billion less than a year earlier.

One analyst said: ‘There’s still no evidence that the margins and return on capital in green energy are better than the margins in oil.

‘I understand there is pressure from the green lobby, politicians and the majestic fund managers like Blackrock but there is a real danger this industry is heading in the wrong direction.’

However, in a sign of confidence Shell said it planned to raise its dividend in the first quarter of 2021.

The decision will come as a relief after Shell slashed the payout early in the crisis for the first time since the Second World War in a bid to keep a lid on its debt, which stands at £55billion.

Russ Mould, director at AJ Bell, said: ‘Shell’s full-year results were undeniably ugly but the oil major’s promise of a dividend in the first quarter of 2021 would represent an increase in the pay-out on both a quarter-on-quarter and a year-on-year basis.’

Donald Trump is no longer part of SAG-AFTRA