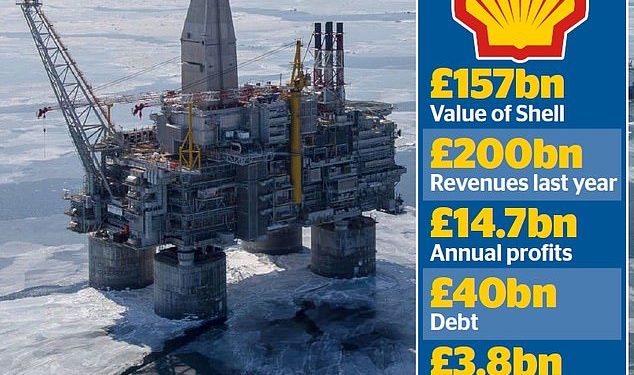 By John Abiona For The Daily Mail

Shell will take a bigger hit than previously thought after withdrawing from Russia following the invasion of Ukraine.

In a trading update yesterday, the FTSE 100 oil giant said ending its joint ventures with Kremlin-backed gas producer Gazprom would cost it between £3.1billion and £3.8billion.

That was larger than the £2.6billion hit estimated when it announced it was pulling out of Russia in February. 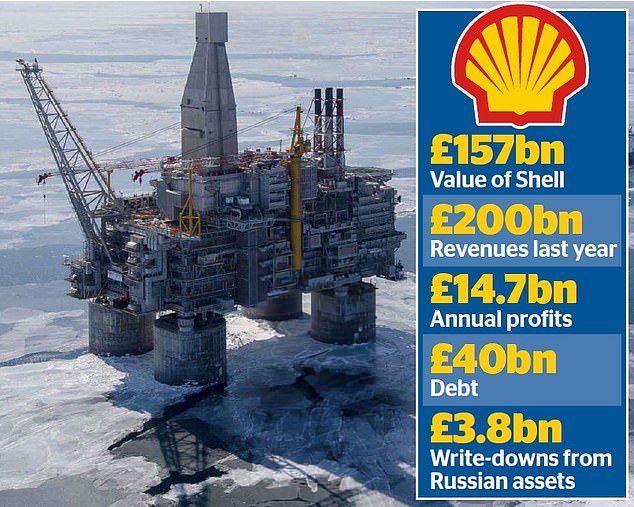 But Shell said its oil and gas trading arm has benefited from a surge in prices following the outbreak of war – though it added that the market remains ‘volatile’. It said ‘the unprecedented volatility in commodity prices’ was hitting cash flow.

Crude soared from below $100 a barrel on the eve of the invasion of Ukraine to a peak of $139 before falling back. It was trading at around $100 a barrel last night having fallen more than 6 per cent in the past three days. Shell shares fell 2.1 per cent, or 45.5p, to 2086p, valuing the company at £157billion.

Hargreaves Lansdown analyst Susannah Streeter said investors have been ‘unnerved’ by the ‘eyewatering costs’ of pulling out of Russia. But she added: ‘The share price should continue to stay reasonably resilient given the divestment far outweighs the reputational damage which could be caused had it not pulled out.’ Shell and rival oil giant BP both announced plans to pull out of Russia in February amid huge pressure from the Government following the invasion of Ukraine.

Shell held a 27.5 per cent stake in the Sakhalin-II – a flagship facility in the Russian Far East that is majority-owned by Gazprom and produces around 4 per cent of the world’s liquefied natural gas. Gazprom is 49.3 per cent owned by Russia’s government.

Shell also plans to end its involvement in the Nord Stream 2 pipeline project.

Shell helped to finance Nord Stream 2 – which was meant to double Russian gas imports to Germany – and is thought to have lent more than £600m towards the project. Rival BP pledged to sell its 20 per cent stake in the Kremlin-backed oil company Rosneft, costing the British company £19billion.

It has received £3.75billion in dividends alone from Rosneft since it took the stake in 2013, and last year Rosneft contributed around 21 per cent of its £9.4billion profit.

In a further move last month, Shell said it would stop buying oil from Russia but still honour contracts signed prior to the war in Ukraine.

But that only came after it was forced to issue a grovelling apology after buying 725,000 barrels of Russian crude oil for a bargain price while the war in Ukraine raged on. Commenting on the situation yesterday, a company spokesman said: ‘Shell has not renewed longer-term contracts for Russian oil, and will only do so under explicit government direction, but we are legally obliged to take delivery of crude bought under contracts that were signed before the invasion.’

Shell and BP saw their finances hammered in 2020 as the Covid pandemic hit demand for fuel and sent oil prices tumbling.

But they bounced back in 2021 as the oil price recovered – prompting calls for a windfall tax to help households deal with soaring energy bills.