She’s effortlessly cool — and so is her charming plant shop 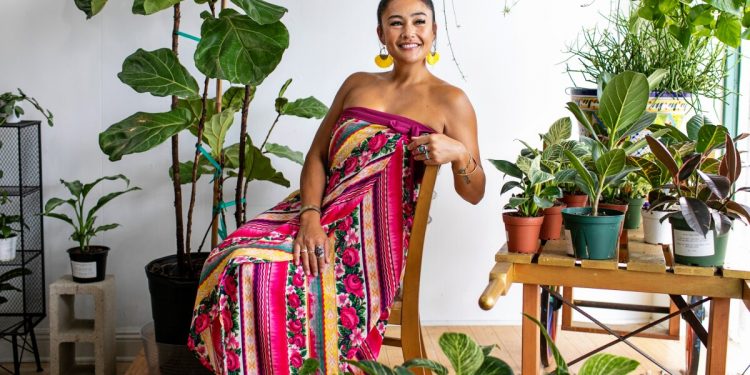 
In our Plant PPL series, we interview people of color in the plant world. If you have suggestions for PPL to include, tag us on Instagram @latimesplants.

Many who enter the Green Place don’t come for the plants, and owner Jennifer Aragon is more than OK with that.

They might paint their own terracotta pots, parking themselves at the plant shop’s center table to start crafting. They might bop their heads to Elvis or Blondie as they sip iced coffee on the couch. If they’re the guy from next door, they might come in on their daily lunch break to play the well-loved piano.

Still, those who do come for the plants are never disappointed.

The shop is thriving with heart-shaped caladiums, tropical marantas and soft-pink syngoniums. “It’s been a while since our restock, so it’s a bit empty right now,” she says, although the vast greenery says otherwise.

Aragon, 38, has effortlessly cool energy. Her black hair curls into a top knot, accented by gold hoops and a welcoming smile. After a decade in retail management, she chose to spearhead her own business solo.

Her downtown Fullerton shop opened in August 2020, and everything in it has a story. Take the rusted Brachiosaurus sunbathing on the front table: Cactus Mart wasn’t selling it but Aragon managed to buy it anyhow. And the hand-painted walls by local muralist Carla Roque, who splashed white-outlined leaves on sleek black paint after seeing Aragon’s reference sketches.

Between local artwork, partnerships with other city vendors and Aragon managing the front desk, the store is a love letter to Fullerton. Sitting across the paint-speckled crafting table, Aragon tells me how she made it that way.

This interview has been edited for length and clarity.

So, when did the plant dream begin?

I started collecting plants about 10 years ago, but the plant shop dream probably started in about 2017 or 2018. That’s when I was like, “I don’t want to be at my job anymore, I really want to do something else. I want to start my own business.” But I didn’t really know what I wanted to do. And then one time I was at home, just watering my plants, and I was like, “I’m gonna open a plant shop.” And back then, there were no plant shops [in this area]. There were nurseries like Home Depot, Lowe’s, Armstrong’s, and the only one that’s like similar to this is probably like the Potting Shed in Orange.

It’s really cool to see everybody’s different aesthetic and personalities come through the plant shops because even though there’s so many, they’re all so different and so unique and have their own personalities.

Speaking of decor, were you the one who decorated this place?

Absolutely, and this is a really big space.

It’s really big. It was intimidating at first, but now that we’re in, I feel like it’s not big enough [Laughs.]

I moved here when I was 22. I just love the area; I’ve seen it change so much. So many stores come in and come out, and it’s just always kept a really cool vibe. I’ve moved three times and I’ve stayed in Fullerton. It was like the perfect look; obviously the perfect location. And to be honest, I never ever, ever would have dreamed that I would be able to have this location. I’ve seen three different shops come and go out of this location, and it’s cool that I’m part of that lineage of the people that are here.

And how did it feel opening this for the first time?

Scary. Really scary. But to be honest, I felt really proud. It’s a scary thing, and I did it by myself. I don’t have a partner, so if it fails, then I fail by myself. But if it succeeds, then I succeed by myself. I’m proud to have that, whether it doesn’t work or it works, I’m proud that I was able to do the scary journey.

Right now, we’re family-run because I’m by myself. I have my mom that works for me. I have my sister that works for me. And then I have a couple girls that work part-time, so they have other jobs and then they pick up hours here and there. And they’re people that I’ve known from other retail jobs, so it’s really cool because I trust their work ethic.

It’s really tight-knit because, especially when you have your own space, you have to trust the people that are running it for you. And we’re not a corporation. It’s just us. Like, when people want to talk to the manager or HR, it’s me! So you really have to trust the people that, in a sense, are taking care of your home. This is my second home. This is it.

How do you bring your culture into your store?

That’s awesome. What’s something that you hope everyone who comes into this store experiences?

Positive energy. Like legit, I want people to walk in and be like, “Oh my God, like, I don’t want to leave. I love being here.” Genuinely, that’s what I want. I want people to come in and like, maybe they’re in a bad mood or they’re having a bad day, and I want them to walk in the door and instantly feel like a positive energy and leave feeling that way. I want it to change their day.

One of the things I love is that people come in and just sit on the couch and drink coffee and just chill, or come in and paint pots and just like chill here for an hour or two. I love that, because it’s like, oh, I’m creating the energy that people want to sit in, whether it’s the music or us, the workers or the plants or whatever it is. I want them to feel a community when they walk in here.

So if there was an emergency and you could only save one plant, which would it be?

[Thinks for a while.] Probably my Philodendron cordatum ‘Brasil.’ So it’s the one hanging on the wall. It’s not a very popular plant, but it’s one of my favorites. The leaves are shaped like a heart, and when they vine, they’re really cool. It’s not one of the cool trending ones on Instagram. It’s not anything that anyone is drawn to, but for some reason, I have like four of them in my house. And I just love them. I love the way they trail. I love their colors. I think they’re really easy to take care of, and they give such beautiful color.

Is there any plant you would leave behind?

[No hesitation.] Yeah, probably all Calathea. There’s tons of different varieties of them. And people love them because they’re gorgeous, but let me tell you, they are the most finicky brats ever. [Laughs.] They’re just so picky, but they’re gorgeous. They’re like the mean girls of the plant group.

Start off small and easy. Stay away from the trendy ones on Instagram. Because usually those need a lot of love and care, and then you can get discouraged. Don’t buy anything expensive in the beginning. Maybe a snake plant, a ZZ plant, a pothos — something easy. Just work your way up.