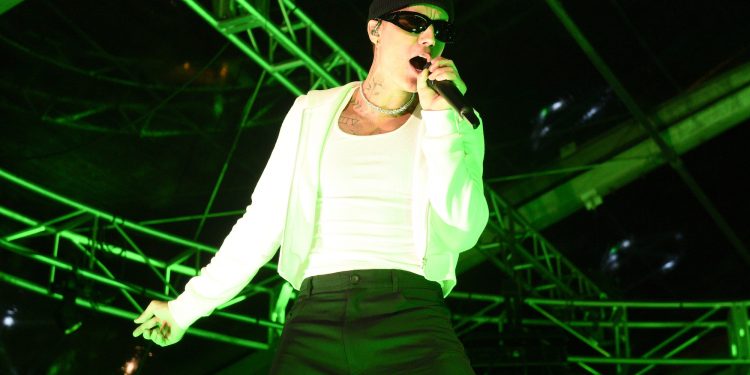 
A shooting outside of Justin Bieber’s Super Bowl party last night (February 11) has left four people injured, according to reports.

The pop star performed at Los Angeles venue Pacific Design Center last night before moving onto club The Nice Guy, ahead of the Super Bowl taking place at SoFi Stadium on Sunday (February 13).

According to TMZ, Kodak Black, Lil Baby and Gunna were standing on the corner of the street outside The Nice Guy talking when a fight started near them. It is claimed that Black was involved in the fight, during which a total of 10 shots were fired around 2:45am. Four people were thought to have been either hit by the bullets or suffered superficial injuries indirectly from the incident.

The LAPD told The Daily Beast that three male victims aged 19, 24 and 60 were among those injured. All injured parties were taken to hospital and have been confirmed to be in a stable condition. No suspects have been arrested in relation to the shooting at the time of writing.

NME has contacted representatives for Kodak Black for comment.

This year’s Super Bowl halftime show will feature a performance from Eminem, Dr. Dre, Snoop Dogg, Mary J. Blige and Kendrick Lamar. Blige recently confirmed she is not being paid to perform at the event, saying: “Listen, you’re gonna be paid for the rest of your life off of this. People are gonna be knocking at your doors. They don’t have to pay me, but if they was paying it would be a lot of money.”

Eminem is also reportedly set to bring deaf rappers Sean Forbes and Warren (WaWa) Snipe to perform at the event, making them the first deaf rappers to play at the Super Bowl. The pair are said to have been booked to perform interpretations of the headliners’ songs in American Sign Language (ASL) to help create “an elevated accessibility experience”.

In other Justin Bieber news, meanwhile, the pop star broke the record for the number of songwriters who contributed to a Song Of The Year nominee last year. Bieber’s 2021 track ‘Peaches’ is in the running for the award and was worked on by a total of 11 songwriters.

Previously, Beyoncé’s ‘Black Parade’ held the title, with nine songwriters involved in the track. Before that, Bruno Mars’ ‘That’s What I Like’ held the record, with eight.