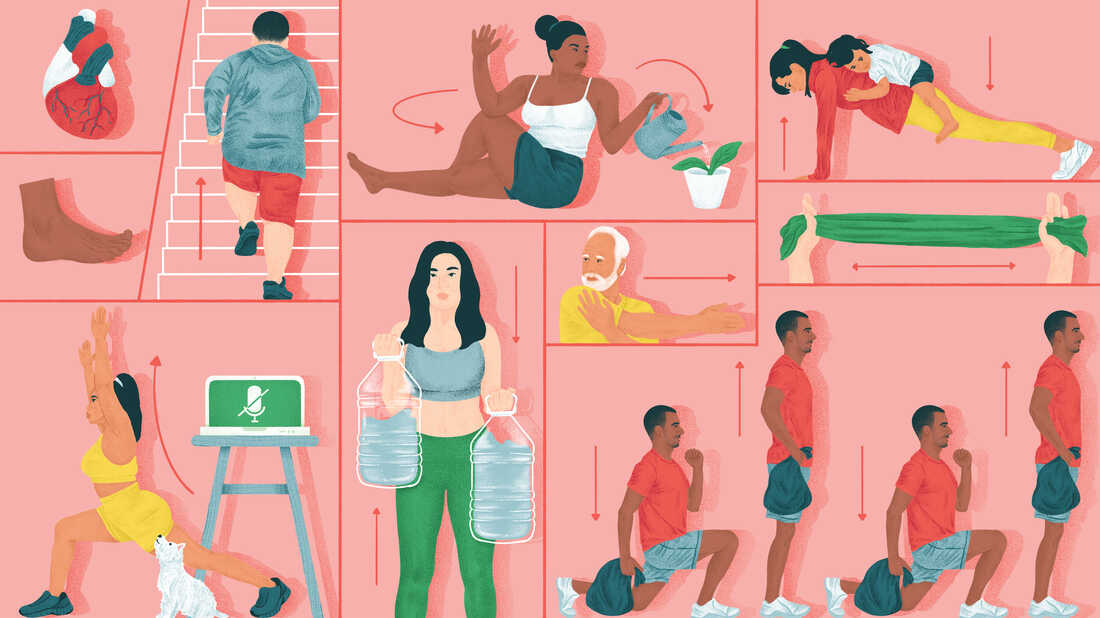 Add 5-minute stints of fun and easy exercise to your day at home by working with what’s around you, says trainer Molly MacDonald.

Add 5-minute stints of fun and easy exercise to your day at home by working with what’s around you, says trainer Molly MacDonald.

Of all the ways in which the pandemic has affected Americans’ wellbeing, perhaps the one we’ve noticed least is how much we’re sitting. And it’s not just bad for our waistlines — it’s hurting our mental health.

More than a year and a half of social distancing and work-from-home policies have led to less time moving around and more time sitting and looking at screens — it’s a potentially toxic combination that’s linked with poorer mental health.

“The sneaky effects of the pandemic that we might not even notice [is] that we’ve changed our sitting patterns,” says Jacob Meyer, director of the Wellbeing and Exercise lab at Iowa State University.

His own research showed that in the early weeks of the pandemic people who exercised less and had more screen time were likely to be stressed, depressed and lonely.

And though most people saw their mental health gradually improve as they adapted to a new reality, people who stayed heavily sedentary didn’t see get the same improvement, according to a follow-up study by Meyer. “People who continued to have really high levels of sitting, their depression didn’t improve” as much, says Meyer.

The good news is that something as simple as some very light movement around the house to break up all that couch surfing time can make a difference in mood, as Meyer’s earlier research has found.

“We know consistently that the more people are active, the more that they exercise, the better their mental health is,” says Meyer.

For many office workers like me, working from home means we’ve fallen into a routine of spending hours at our desk. With another pandemic winter about to hit us and much of the country and the world still dealing with COVID, and often stuck at home more than we’d like, it’s time to start sitting less and moving around more.

Meyer and other exercise experts shared some tips to get started:

If you haven’t been working out throughout the pandemic and are too intimidated about starting now, don’t worry, says Meyer. Start small.

“If I were to walk around my office, all those steps would count, it would be helpful,” he says.

People trying to start exercising often get caught up in an “all or nothing” thinking, says sports psychologist Jennifer Carter at the Ohio State University.

“It’s like either I do zero or I do two hours, and if I don’t get two hours, then it doesn’t count, or it’s not good enough,” she says. But in reality, “five minutes is better than none.”

In fact, “going from no activity at all to even a little bit of activity is going to get some of the biggest health effects,” says Meyer, compared to say someone who is already working out regularly.

Make it easier for yourself

“I think part of developing a good exercise plan for each of us is knowing ourselves well, knowing what’s feasible,” says Carter. And that includes knowing what’s not realistic for you.

So if you hate running, don’t run just because it’s trendy or someone tells you it’s good for you, says Carter. Or if you’re not a morning person, then don’t plan to exercise in the morning.

And remember, she adds, “getting started is the hardest part.” Don’t blame yourself if you’re struggling to get started. It’s important to have compassion on yourself. “One tenet of self-compassion is this common humanity, that we all struggle at this,” she says.

Try to think of ways that would make it more likely you’ll stick to workout plan, perhaps by building in some external accountability. She suggests arranging with a friend to call or text each other at an agreed on time to spur each other to take a walk or run. Carter used to do it with her friend in the morning, she says and “that would get us going and have that accountability.”

Walk whenever you can

“I’ve told a lot of people, if you have space … in your house, walk room to room, use your stairs,” she says. “And if you don’t have stairs, just walking room to room, back and forth, getting those extra steps.”

Meyer agrees that sitting less and walking more will make a big difference. “If you have virtual meetings, using the beginning and end of that meeting as opportunities for you to walk around the block or walk to take out the trash or maybe there’s somewhere nearby that is a place you like to go to,” he says. “You could walk there and walk back just to get that same habit of changing up your sitting patterns.”

Another approach many people are using now is to do a “virtual commute,” he adds, “where at the beginning of the day, they walk around their house or walk around their neighborhood so that they’ve commuted to work.” And you can walk again at the end of the work day. 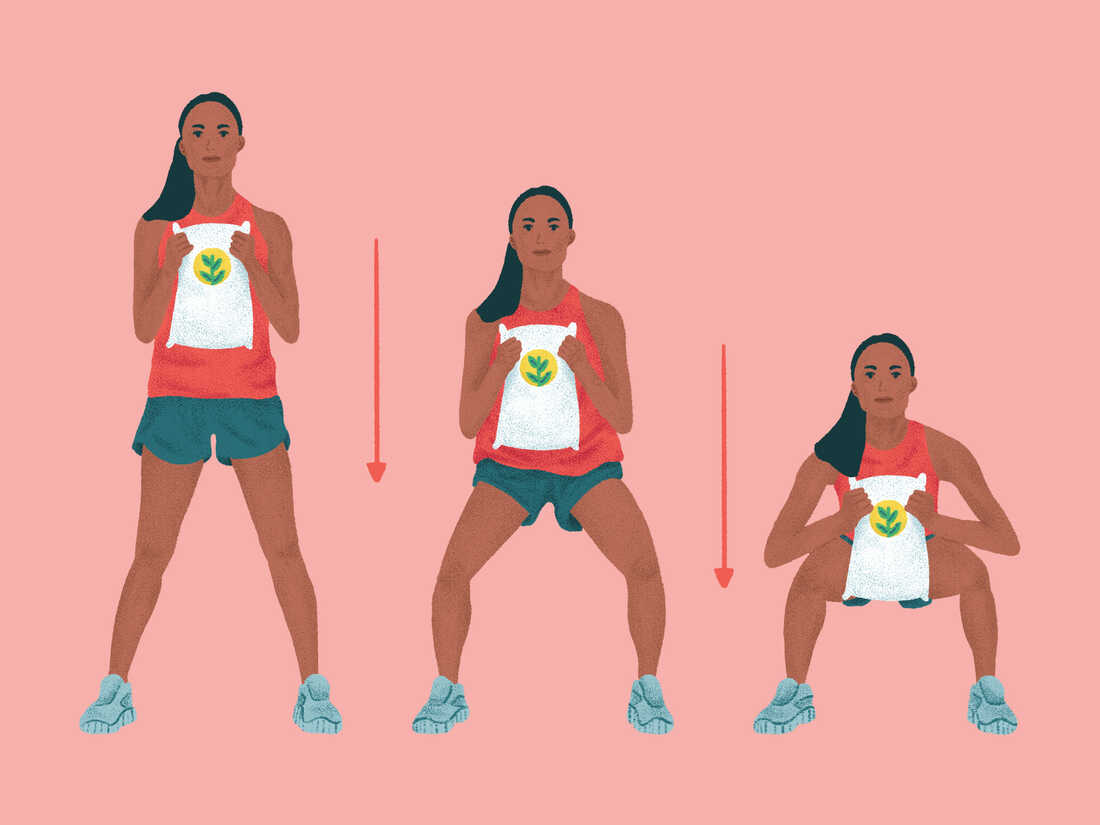 Look for opportunities to stand up, get your blood pumping or increase the activity by using your muscles. Start with squats, suggests physical trainer Molly MacDonald.

Look for opportunities to stand up, get your blood pumping or increase the activity by using your muscles. Start with squats, suggests physical trainer Molly MacDonald.

If it’s hard for you to block out a chunk of time in your day to walk or do any other exercise, try spending just a few minutes every hour exercising, suggests McDonald.

“If you can get five minutes every hour, that’s going to add up throughout the day,” she says.

Just add it to your calendar and set a timer for 5 minutes, she adds. If you’re working an eight-hour-day, it adds up to 40 minutes a day.

“That’s 40 minutes that you did something, and it wasn’t a 40-minute chunk that you had to pull out of your day,” she says. Health guidelines recommend at least 150 minutes of moderate exercise every week. And those 40 minute daily activities will help add to the weekly goal, she adds.

Crank up the intensity, in short doses

“A lot of bodyweight exercises are really good to do throughout the day, [and] help with circulation.”

If you’ve never done these exercises, she suggests starting with squats.

“That’s a great place for everybody to start,” she says. “Just lean your back against the wall and bend the knees and see how comfortable you feel.”

As for how many squats or lunges we should aim for, she says, “there’s no magic number.” Just fit in as many as you can in the time you have. “Maybe you really only have two minutes. Well, do what you can in two minutes.”

You can try adding some weight to your mini workouts using objects around your house like a can of beans or a sack of sugar, says McDonald. But take care not to grab anything too heavy until you get a sense of your own strength.

If more intense effort feels daunting, remember that “exercise, even at a light intensity, might be giving you the same mental health effects as the higher intensity stuff,” Meyer says. Especially, if you’re depressed and/or not walking around much to begin with. “Doing anything in those five minutes is better than doing nothing.” 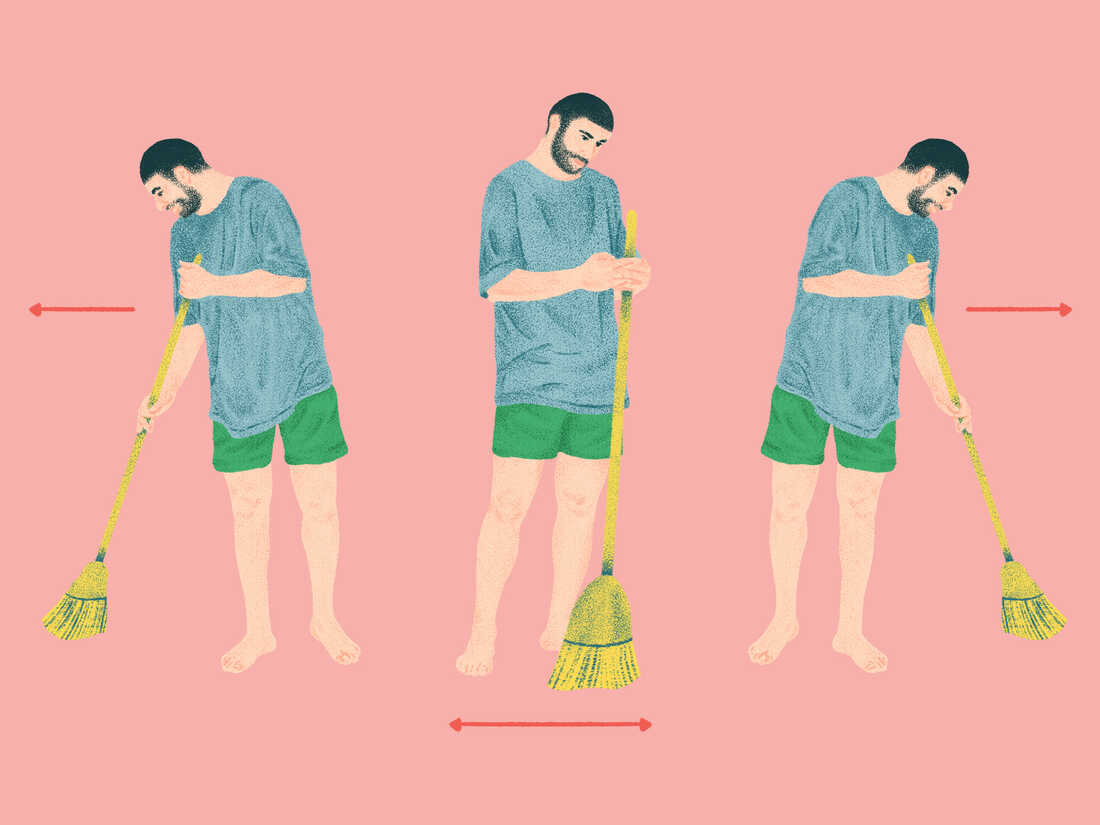 Does sweeping make you sweat? McDonald also advises her clients to do some chores during these breaks — anything that involves standing or walking.

Does sweeping make you sweat? McDonald also advises her clients to do some chores during these breaks — anything that involves standing or walking.

Do chores that make you move

McDonald also advises her clients to do some chores during these breaks — anything that involves standing or walking. “I now jump at the chance to even just walk down the hall to take the trash [out],just so I can get out of my seat,” she says.

Personally, I have turned to my two favorite chores — emptying the dishwasher and washing dishes. And Mcdonald says that’s a good move.

“You’re standing washing your dishes [and it] is going to help your blood flow because you’re not sitting anymore,” says McDonald. “You’re using your legs, your muscles, [and] your muscles are asking for that blood flow to start up again.”

And if you plan to do that, just make sure you mute yourself, McDonald adds. You probably don’t want your colleagues hearing you huff and puff through your workout. “Some people have learned [that] the hard way,” she says.

How to Watch Nasas Launch to Jupiter – The New York Times