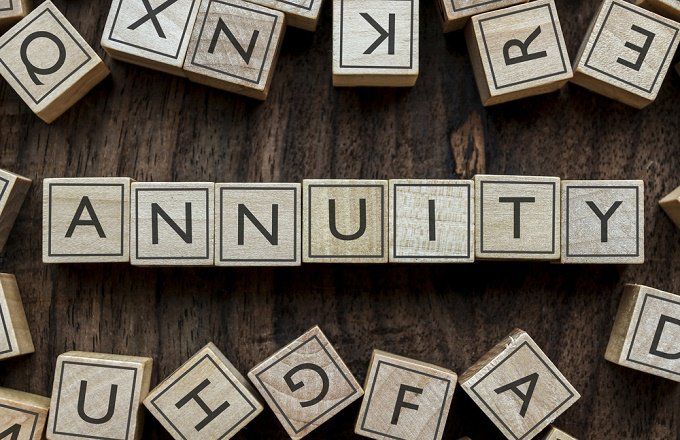 Advantages and Disadvantages of Buying an Annuity Within Your 401(k)

All of this means that there are a number of factors on both sides to consider when thinking about whether it makes sense to hold an annuity in your 401(k).

Advantages of Buying an Annuity in Your 401(k)

Sharing his expertise with the Wall Street Journal in April 2019, David Blanchett, head of research for Morningstar Investments, wrote about the advantages of buying an annuity within a 401(k).

One advantage of buying an annuity within your 401(k)—if you’re female—is that your gender won’t affect the price. Annuity prices reflect life expectancy, and outside of a 401(k), women can expect to pay more because they live longer on average. On the other hand, bought within a 401(k), this smoothed-out pricing means men might pay more.

Annuity payments might also be higher within a 401(k), Blanchett writes, because insurers can save money on marketing when they have a large pool of potential customers supplied by an employer. But you shouldn’t assume payments are better without seeing what outside annuities have to offer, he cautions.

Plan sponsors have certain obligations to plan participants under the Employee Retirement Income Security Act (ERISA). So it would be natural to assume that if your plan sponsor offers an annuity within your 401(k), it’s been vetted as a solid choice that will deliver on its promises and not rip you off with unreasonable fees. However, it’s unwise to blindly trust that your employer has made an ideal choice.

Why is that? As we’ve seen, employees have brought lawsuits against 401(k) plan sponsors for excessive fees. In addition, the funds in many retirement plans are known for high administrative fees, particularly if a third-party 401(k) recordkeeper is used.

Further, the SECURE Act does not contain a requirement that employers provide low-cost annuities. If the annuities offered within your 401(k) are not satisfactory, rolling over part of your 401(k) to an outside annuity is another option.

Disadvantages of Buying an Annuity in Your 401(k)

If you were to buy a deferred annuity, in which you wouldn’t start receiving an income stream until perhaps a decade or more after buying the annuity, your annuity principal would grow over that decade. You could expect to receive an interest rate similar to what a certificate of deposit would pay, which would be similar to the inflation rate. Therefore, your money will grow more slowly than it might if invested in the stocks or ETFs.

Annuities have the same tax-deferral benefit as 401(k)s do. You don’t pay taxes on the growth in an annuity—or on the money in a 401(k)—until you take the money out. Morningstar’s Blanchett suggested purchasing an annuity using the money in a taxable account if you have the funds. It doesn’t make sense to buy an annuity in an account where you already get the benefit of deferred taxes.

Many people don’t have the funds in a taxable account to buy an annuity, however. People tend to hold most of their net worth in their retirement accounts and in their home equity. And you will always need cash on hand in case of an emergency. Getting money out of an annuity while still in the accumulation phase is complicated and can entail surrender charges. The fewer years you’ve paid into the annuity, the larger the surrender charge may be. Also, once you’ve annuitized, or started receiving payments, your decision is usually irrevocable.

For these reasons, it becomes logical to tap a 401(k) to buy an annuity. It’s also logical to use the money you’ve specifically set aside for retirement, rather than some other pot of savings, to provide a retirement income stream.

A concern people have about buying annuities is dying before they’ve at least broken even with the principal they’ve put into the product. With any type of insurance product, the way insurance companies stay in business is through some customers coming out ahead, some coming out behind, and others roughly breaking even. Money that you use to buy an annuity is money that you generally cannot leave to your spouse, children, or other heirs. But it can be if you’re willing to pay more to obtain principal protection or period certain benefits, as explained in the earlier example.

A qualified longevity annuity contract (QLAC) is a type of advanced life deferred annuity funded with an investment from a qualified retirement plan, such as a 401(k) or an IRA. Beginning January 1, 2021, an individual can use up to $135,000 of their retirement savings account to buy a QLAC.

The main benefit of QLAC is a deferral of taxes that accompany RMDs. The QLAC’s value is not included in RMD calculations. It must begin paying out by age 85. A retiree or near-retiree might wish to buy a QLAC at age 70 before RMDs kick in at age 72 if they have plenty of retirement income from other sources. RMDs used to kick in at 70½ before the passage of the SECURE Act, but the new age is 72.

Make sure that the insurance company offering the annuity has strong financial strength ratings from credit rating agencies such as A.M. Best. And check how the annuity’s fees and payments compare to annuities available outside your 401(k).

Few 401(k) plans offer annuities today, and even when they do, workers usually don’t choose them. But there’s a push to expand this option, as the SECURE Act demonstrates. Further, as the Center for Retirement Research paper points out, with so many workers now dependent on 401(k) plans, “the question of how they will manage their accumulated assets over their retirement takes on increased urgency.”

Whether to buy an annuity within a 401(k) is a complicated decision that can have a big impact on your retirement. It’s highly personal, and what your coworker is doing or what your HR rep thinks sounds good may not be the right choice for you. It’s important to have all the facts and compare your options so you can get the decision right.

Discover the Many Different Ways to Make Money with a Blog

The EAI launch event will be streamed on the Edain website

Reuters ahead with key news on regulation of Big Tech

Retailers back vaccine check-ins for shoppers

Want to Raise Money Faster? Talk About Yourself