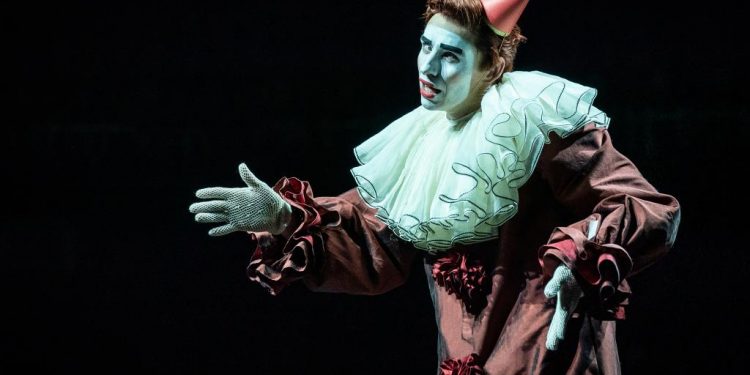 Two weeks ago, an Oscar nominee spat in my face.

That would be Jessie Buckley, who was nominated as Best Supporting Actress for “The Lost Daughter” — and the aforementioned spittle incident went down at the new West End production of “Cabaret” in London.

It wasn’t a loogie of outrage (although me being a critic, perhaps it was), but an outgrowth of the wild unpredictability of Sally Bowles, the troubled British singer who plies her trade at Berlin’s seedy Kit Kat Club.

After Sally was introduced by Eddie Redmayne’s Emcee during “Willkommen,” Buckley ran up to my balcony seat and fluttered her salivated lips like a baby who didn’t want her carrot puree. “So that’s why I had to take a COVID test to be here,” I figured.

The A-list show, which is up for 11 Olivier Awards on Sunday, tries to differentiate itself with that brand of breathing-down-your-neck intimacy and immersion. And, at first, director Rebecca Frecknall’s trick works splendidly.

We enter the theater through a side corridor bathed in green light, are handed a shot of schnapps (ew!) and watch subversive lobby acts from scantily clad dancers and musicians.

The lascivious prologue brings to mind the off-Broadway run of “Natasha, Pierre & the Great Comet of 1812.” On Broadway — sources say the musical would like to come to the Hudson Theatre — the preshow antics would be a union nightmare. But let’s leave that to the lawyers.

At the start, you’re sucked in by the delirium. Then, as soon as the final notes of “Willkommen” are sung by Redmayne and the tight cast, the dreamy environment sadly fades away and another capable production of John Kander and Fred Ebb’s “Cabaret” begins — one that is initially far too dark to serve its story.

Set in 1930 Weimar Germany, “Cabaret” is about two parties: One, the rise of the Nazi party, and the other, the increasingly raucous party citizens are throwing to pretend their society isn’t crumbling around them. An American writer, Clifford Bradshaw (Omari Douglas), arrives in Berlin in the middle of all the upheaval and becomes enamored by British songstress Sally at the Kit Kat Club.

In Act 2, their world is shattered and the blood drains from the characters’ faces. So, for “Cabaret” to powerfully hit home, Act 1 needs to be fun, fun, fun!

Considering the classic upbeat songs in the first half, that’s not so arduous a task: “Don’t Tell Mamma,” “Mein Herr,” “Two Ladies” and “Money” are funny, sexy and pulsing on paper. Even Sally’s sadder “Maybe This Time,” about how she might finally turn her life around, has a throughline of hope.

Yet somehow in a production that has its audience seated in a throbbing nightclub, the first 90 minutes are wrongheadedly dreary and jump the gun on the unhappy ending.

The look also adds to the ennui. While the circular, spinning, hydraulic set by Tom Scutt is impressive, and we’re drawn in by proximity, there is a sepia quality to the staging. Act 1 would be improved by pops of color, better choreography and actors venturing out into the audience more. Give me more dancing on tables. With a $430 top ticket (astronomical for Britain) that includes Champagne, you’d think audience interaction would be the whole point. More spitting, Sally!

Should “Cabaret” come to Broadway? The show could use some panache. Sam Mendes’ definitive 1993 revival was restaged in New York with the help of Rob Ashford, so there’s nothing wrong with bringing in some fresh eyes to jazz things up. But there are thrilling strengths already worth experiencing.

Redmayne’s Emcee is controversial — as “I love it! I hate it!” a performance as you’ll find this season. Count me among the “I love it”s. Dressed like a bulbous French clown, he’s a singing, dancing Richard III who piles on the charm while concealing menace.

Also eye-opening are landlady Fraulein Schneider (Liza Sadovy) and her man-friend Herr Schultz (Elliot Levey). Roles that tend to lean stiff are sensual and human this time. Their duet of “It Couldn’t Please Me More” is perfection, and Sadovy’s “What Would You Do?” is paralyzing.

Buckley is mostly memorable, too. She’s the Lisa Simpson of Sallys — spontaneous, yes, but confident and in control. Her portrayal is not the manic pixie dream girl some actresses turn Sally into. When she arrives at the title number, though, which can be interpreted in myriad ways, she’s been given wacky marionette choreography that doesn’t ring true. Not one bit. Her chemistry with Douglas (wonderful in “It’s a Sin,” miscast here) also isn’t strong enough for us to buy into a torrid love affair. Perhaps we’d believe they’d go shopping for curtains.

(Redmayne and Buckley’s parts have since been taken over by Fra Fee and Amy Lennox.)

If “Cabaret” truly wishes to get a red carpet “Willkommen” from NYC, the show must grab hold of what’s great about it — immersion, a sexy ensemble and high spirits — and then bring the audience crashing down along with its characters.

We should start the night high on Champagne and end it in utter despair, grasping for a whisky bottle.