By Matt Mcnulty For Dailymail.Com

A sick bottlenose dolphin that washed ashore in Texas died after beachgoers attempted to ride it – and now those involved are facing a possible harassment investigation, according to the Texas Marine Mammal Stranding Network.

The group of people, who have not been identified, found the beached dolphin at Quintana Beach County Park on Sunday evening and tried to push it back into the water, where some tried to ride the animal, the agency told the Houston Chronicle.

The ailing dolphin soon became stranded on the shore again, and died before rescuers could arrive to the Gulf of Mexico beach town about 60 miles south of Houston.

Pictures of the incident, posted to the animal rights group’s Facebook page, showed the beached dolphin surrounded by the group before playing with the sick marine animal in the shallow water. 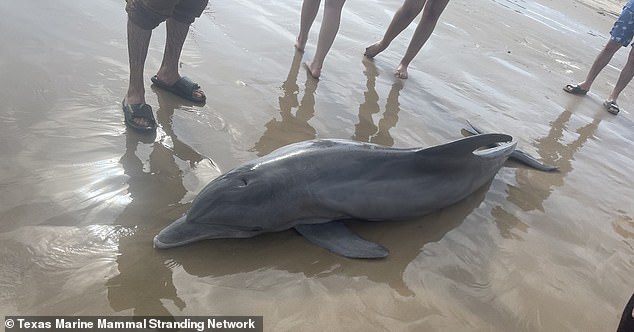 Pictures of the incident show the beached dolphin, pictured, at the Quintana Beach County Park on Sunday evening 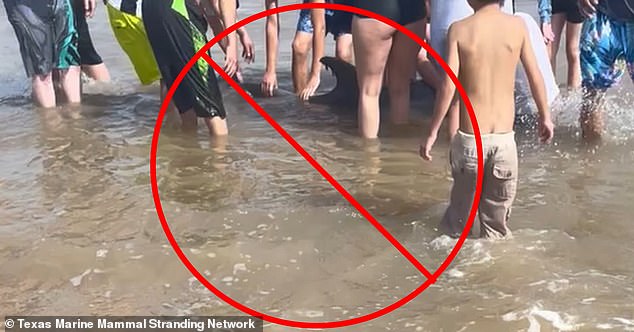 A group of beachgoers can be seen playing with the sick marine animal along the shallow water, with several trying to ride the dolphin prior to its death

The rescue agency said it had alerted the park manager regarding the stranded dolphin and asked the group to remain with the animal until officials arrived at the scene.

However, it died before the park manager was able to arrive, Quintana Beach County Park officials reported.

Heidi Whitehead, executive director of Texas Marine Mammal Stranding Network, said that while the group’s intentions may have been harmless, the resulting stress likely contributed to the sick animal’s death.

‘Dolphins strand because they are sick or injured and will most likely drown if returned to sea or re-strand in worse condition,’ Whitehead told the Chronicle. 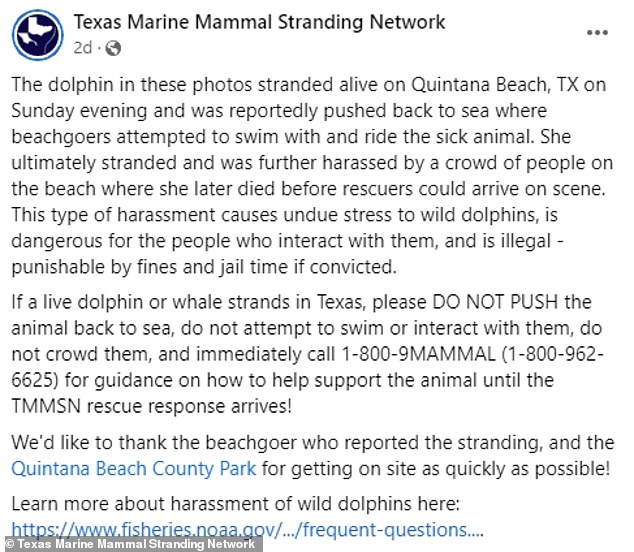 ‘Marine mammals are federally protected under the Marine Mammal Protection Act of 1972 and those behaviors are considered harassment, which is punishable by law.’

Whitehead added that the agency has since forwarded all related information to the National Oceanic and Atmospheric Administration, which investigates cases of harassment against marine mammals like whales and dolphins.

Those convicted of marine mammal harassment can face fines and even jail time, according to the Texas Marine Mammal Stranding Network.

The proper response to encountering a stranded dolphin or whale is to not push it back into the water, crowd it or interact with it in any way.

If beachgoers do encounter a live stranded dolphin or whale, marine wildlife experts ask that they contact the network at 1-800-962-6625 for assistance on how to properly care for the animal until a rescue response team arrives.

Overwatch 2 is collaborating with One Punch Man, hosting a dating sim, and more in Season 3

Get Out Of Your Head! Shut Down Negative Self-Talk With These Proven Strategies

Overwatch 2 is collaborating with One Punch Man, hosting a dating sim, and more in Season 3

Get Out Of Your Head! Shut Down Negative Self-Talk With These Proven Strategies