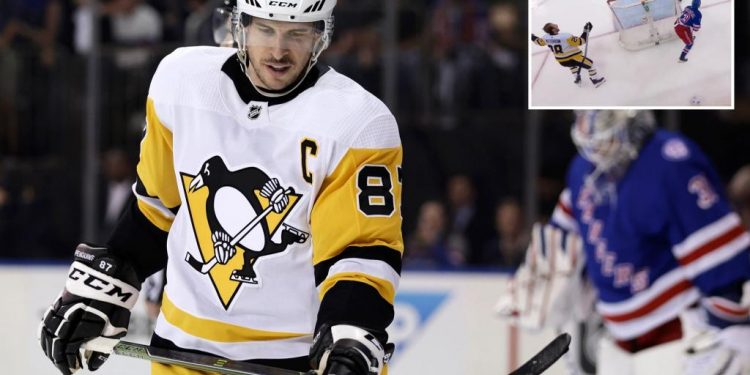 Sidney Crosby believes the NHL’s “terrible” helmet rule cost the Penguins in their 4-3 overtime loss to the Rangers in Game 7 on Sunday.

With less than six minutes left in regulation, Penguins defenseman Marcus Pettersson lost his helmet after getting tied up with Rangers left winger Alexis Lafreniere behind the net. By rule, Petersson had to go straight to the bench after losing his helmet, opening the door for Rangers center Mika Zibanejad to take advantage of the moment and score, tying the game 3-3 with 5:45 left in the third.

“Tonight I think was an example of one game, anything can happen and we didn’t get that extra goal late in the game and a terrible rule probably ends up being the difference in the game,” Crosby said after Pittsburgh’s first-round ouster.

Per NHL rules, a player who loses his helmet will face a penalty unless he leaves the ice or puts his helmet back on. Though Pettersson complied and appeared to look for a penalty against Lafreniere for the tussle, Zibanejad’s goal late in the third period ultimately set the stage for winger Artemi Panarin’s overtime heroics to clinch the series for New York.

Penguins head coach Mike Sullivan told reporters after the game that he thinks the rule “stinks.”

“I think it stinks,” Sullivan said. “He has to come off. His helmet gets pulled off intentionally. But that’s the rule.”

Penguins goalie Tristan Jarry also recalled what he saw in the controversial moment.

“I just saw Marcus skate off the ice. I think that’s a rule made by the NHL that could be changed,” Jarry said. “I don’t think there’s many injuries that happen when players play without helmets. I think it’s something that’s cost us. I think that he loses his helmet, he comes back to the net and he plays a guy out front, I think that’s a nothing play.”

This is the fourth straight year the Penguins have failed to advance to the second round.

Pittsburgh initially led the best-of-seven series, 3-1, but suffered a blow in Game 5, when Crosby left the game after taking a hit from Rangers defenseman Jacob Trouba. Trouba wasn’t punished by the league for the hit and Crosby sat out Game 6 on Friday due to an upper-body injury.

“I don’t know, I think we played the right way,” Crosby said. “I think if you look at Game 5, we had a tough span of a few minutes and Game 6 probably an even shorter span than that when they got back in the game. Tonight we were just on the wrong end of some bad bounces. We played a great game tonight and we played some good hockey throughout the series. We didn’t get that next one tonight, that probably was the difference, but I think even when we had those leads we still played the right way.”

The Rangers, meanwhile, advanced to the second round, where they’ll face the Carolina Hurricanes beginning Wednesday.