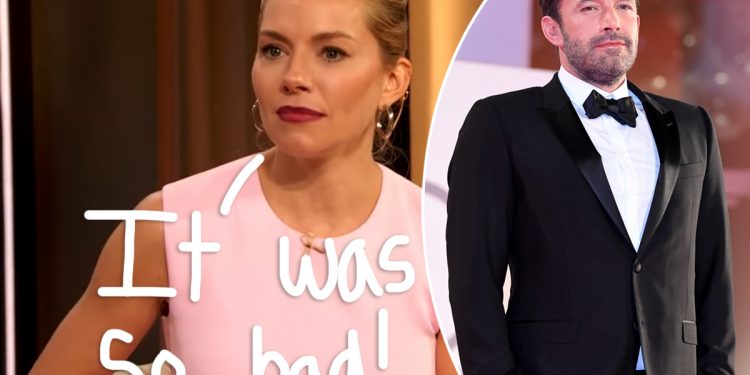 
Apparently, starring opposite Ben Affleck proved to be a bit of a challenge for Sienna Miller!

During an appearance on The Drew Barrymore Show this week, the 40-year-old actress opened up about all of the Hollywood heartthrobs she has worked with throughout her career – including Paul Rudd, Channing Tatum, Jimmy Fallon, and Bradley Cooper. She said of her previous leading men:

“They’re all great, aren’t they? I mean, on the whole, I don’t think I’ve ever worked with somebody where I was like – well, a couple maybe, but on the whole, on that list certainly, they’re all just delightful.”

But when it came to her former co-star Ben, who she worked with on the 2016 film, Live By Night, the Anatomy of a Scandal star admitted she had a difficult time portraying their characters’ love story. Why? Well, it turns out the romantic chemistry between them was severely lacking! Sienna explained:

“Ben Affleck was like my brother. I’ve never laughed so much in my life. I mean, that sounds like a ridiculous thing to say and like a name-dropping thing to say, but I actually mean it. We had zero chemistry whatsoever. It was hysterical. We were supposed to be in love. We could not be less attracted to each other, which was hysterical.”

His fiance Jennifer Lopez certainly does not have the same struggle! LOLz!

The issue was not just due to their sibling-like relationship, though. She shared that the two had some logistical problems that got in the way, as well:

“He has an enormous head. I have a small one, so they’d have to, like, put me slightly ahead of him. … And he directed the movie, and I could barely look at him for laughing the whole time.”

At least it was never boring on set!

Elsewhere in the interview, Sienna revealed that she is currently in a relationship. While she did not identify her special someone, she did comment on how she does not understand the concept of casual dating:

“I’m English and the whole concept of dating in America is different. If you kiss someone in England, you’re basically together. This whole, ‘I’m dating a few people’ thing — I’m like, ‘God, what is happening?’ How does anybody manage that?”

It’s not for everyone! But hopefully, she has some better chemistry with her new beau than she did with Ben! Reactions, Perezcious readers? Are you surprised that Sienna and Ben had “zero chemistry” in the gangster flick? Let us know in the comments! You can also ch-ch-check out her conversation with Drew (below):

1987 houses were less affordable for median buyers than today. : RealEstate