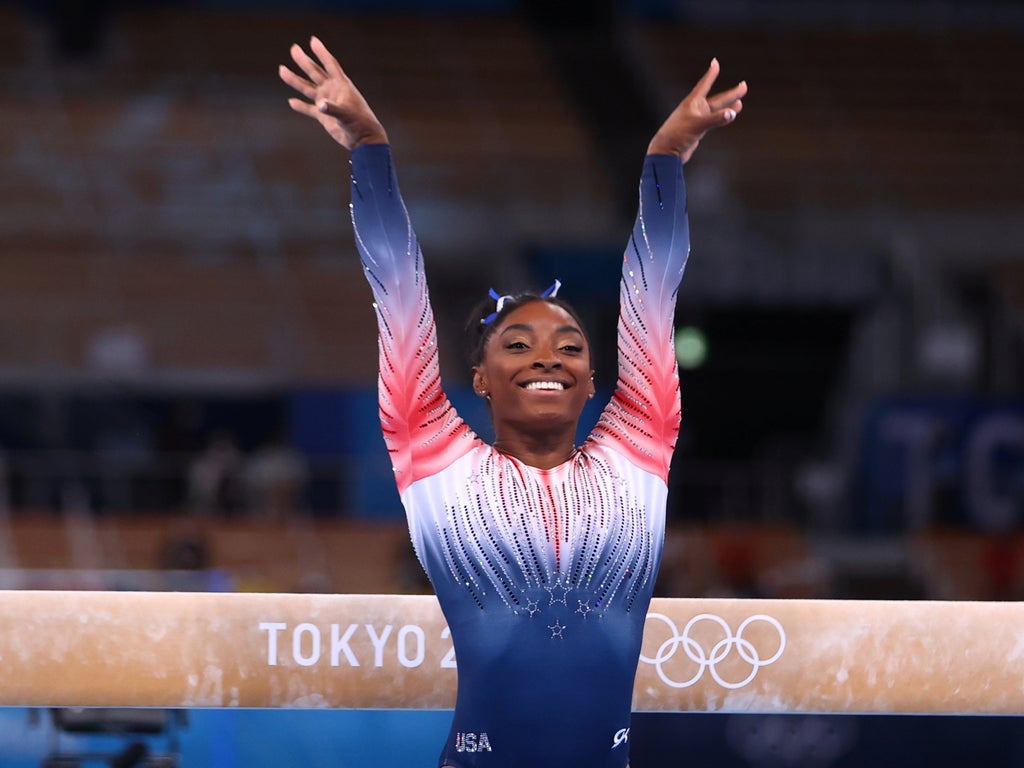 The four-time Olympic champion hasn’t competed since withdrawing from the women’s team final last Wednesday after just one rotation, citing mental health concerns and a phenomenon called the “twisties”.

Described as a sort of mental block in which gymnasts lose their sense of orientation while in mid-air, it is universally feared and widely experienced.

“It’s honestly petrifying trying to do a skill but not having your mind and body in sync,” Biles wrote in an Instagram story last week, noting that she’d had these kinds of periods before and it had usually taken around two weeks to recover. “Something you literally have to take day by day, turn by turn.”

The 24-year-old went on to pull herself out of the individual finals for vault, floor and uneven bars.

But she returns on Tuesday morning to compete on the apparatus she won a bronze medal on in Rio five years ago.

Urara Ashikawa of Japan rounds off a tidy and accurate routine – but it’s only good enough for fifth in the standings. Simone Biles remains in silver medal position with three gymnasts to go.

Next up is Sunisa Lee – the individual all-around champion. There was a wobble from the American midway through her routine but she held on before delivering an outstanding finish. That wobble is likely to cost the 18-year-old.

Biles goes second after a score of 14.000 – I’m sure many would have thought the judges would have scored that higher.

Biles is marked for a 6.100 in terms of difficulty and receives a score of 7.900 for her execution.

It’s unlikely to be enough for a medal given there are five gymnasts to come – but that was an incredible performance from Biles and she looks proud of her display in this Olympic final.

Biles smiles to the crowd and she begins her routine with a crouched spin on the beam. A triple backwards flip across the length of the beam increases the difficulty of her routine. The finish is spectacular! A backwards double pike dismount, and a perfect landing.

Considering everything that has happened over the past couple of weeks, what a remarkable performance from the American.

Tang Xijing is up next for China – and a backwards double twist adds a final flourish to her routine.

Tang qualified second with a score of 14.233, and her mark in the final is the exact same! With a difficulty score of 6.00, there will be more ambitious routines in this final.

The balance beam sees gymnasts perform leaps, flips and turns on the narrowest of surfaces.

The beam is 1.25 metres off the ground and five metres long but is just 10 centimetres wide.

Gymnasts have 90 seconds to perform their routines before dismounting from the bar, and are judged for the difficulty and execution of their performance.

Canada’s Elsabeth Black is up first and delivers a solid performance to open the balance beam final. She wraps up with a front somersault twist and sticks the landing.

There was a slight slip on the beam from the Canadian, and she is awarded a score of 13.866 – that’s down on her qualifying score.

Simone Biles waves to the arena as she is introduced at the start of the women’s balance beam final.

Alongside Suni Lee, Biles is competing in her first individual final of the Olympic Games after withdrawing from the team all-around final, citing mental health concerns.

Biles is third up out of eight in the balance beam final. The American finished fifth in this event in Rio.

Jason Kenny has become Great Britain’s greatest Olympian after claiming silver in the men’s team sprint at Tokyo Olympics 2020 for his eighth total medal at the Games.

Kenny, who also has one bronze, breaks a tie with another legend of British cycling in Sir Chris Hoy, who has six gold medals from his total of seven.

Team GB, with Ryan Owens and Jack Carlin alongside Kenny, were the underdogs against Netherlands in the final, and it went to form with the Dutch able to take an Olympic record in 41.369, ahead of 44.589 for Great Britain.

The 33-year-old, starring at his fourth Olympic Games, won gold in the team spring at Beijing 2008, defending that title and adding gold in the sprint at London 2012.

The world champions come out on top and add the Olympic title. The Dutch had been the strongest team throughout the men’s team sprint competition.

It is history, though, for Jason Kenny – who joins Bradley Wiggins on eight Olympic medals. No other British athlete has more.

Kenny seemed to lose Carlin’s wheel on the second lap – and there was no doubt the Netherlands are deserving champions.