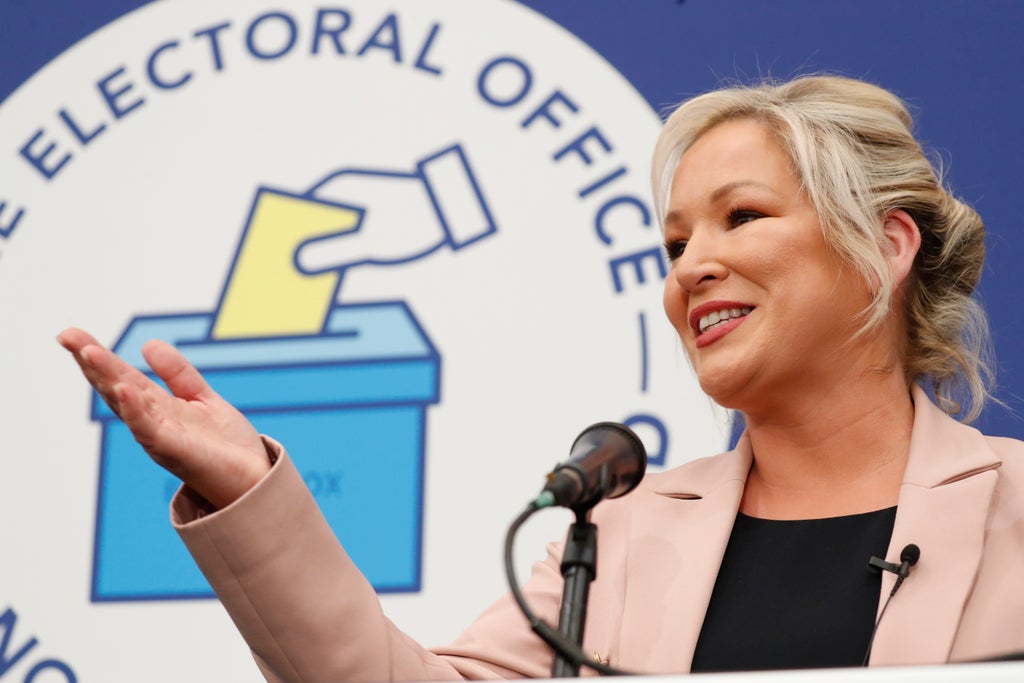 Sinn Fein has hailed a “new era” for Northern Ireland as the Irish nationalist party swept history aside and emerged the largest political force at Stormont assembly for the first time.

Michelle O’Neill, the party’s leader north of the border, challenged the Democratic Unionist Party (DUP) to drop its obsession with Brexit checks and “work together” to restore the power-sharing executive which collapsed in February.

“Today represents a very significant moment of change, it’s a defining moment for our politics and our people,” said Ms O’Neill after the republicans won the most votes and most seats for the first time since the country’s political institutions were set up a century ago.

DUP leader Sir Jeffrey Donaldson said his party would accept the outcome of the election, but insisted that the Northern Ireland protocol remained a barrier to power-sharing.

“Our position remains that we need to remove the long shadow of the protocol that is inhibiting our ability to operate and function properly,” Sir Jeffrey told the BBC. “The sooner that happens, the sooner we’ll be in a position to move forward.”

Asked whether failing to serve alongside Sinn Fein would be “anti-democratic”, the DUP leader said: “There are lots of parties in lots of places in the world who decide not to go into a government, but we are committed to the political institutions.”

But Ms O’Neill insisted that the urgency of the cost of living crisis meant that “we must all turn up” at Stormont next week, adding: “The people can’t wait. The people have told us they expect us to work together. The people are right.”

Boris Johnson’s government is drawing up legislation aimed at tearing up checks on goods moving between Great Britain and Northern Ireland unilaterally – a move which is sure to spark a major row with the EU.

But the bill is understood to be on hold until after the 10 May Queen’s speech, with ministers hoping that the election results can persuade Brussels to agree that checks must be dropped to restore power-sharing arrangements.

Northern Ireland secretary Brandon Lewis, set to travel to Belfast on Monday to meet political leaders, responded to results by encouraging the parties to form an executive “as soon as possible”.

The cabinet minister said the electorate “were clear that they want a fully functioning devolved government in Northern Ireland, they want the issues around the protocol addressed, and that they want politics to work better”.

Labour urged the government to “prioritise practical solutions through negotiation with the EU and not chase headlines with empty threats”.

Peter Kyle MP, shadow Northern Ireland secretary, said Sinn Fein had “earned the right to nominate a new first minister”, adding that protocol issues “should not prevent a return to the executive”.

Bertie Ahern, former prime minister of Ireland, called for the UK and EU to come to a compromise over the protocol. “I think what we desperately need in the island of Ireland now is for those negotiations to come to a successful conclusion,” he said on Saturday.

Although the Brexit row looks set to plunge the country into constitutional crisis, Sinn Fein’s unprecedented victory also raised the prosect of push for a referendum on the reunification of Ireland.

Sinn Fein president Mary Lou McDonald said that she believed a border poll on a united Ireland would be “possible within a five-year timeframe”. The leader of the party told Sky News: “We believe that preparation for that big change needs to happen now.”

The Good Friday Agreement recognises the right of people of Ireland to reunify. The law states that the Northern Ireland secretary can order a ballot if it “appears likely” a majority of voters want reunification, but is unclear on how that would be decided. The Republic of Ireland government must also agree to a ballot.

Scotland’s first minister and SNP leader Nicola Sturgeon said “fundamental questions” would be asked of the future of the UK as a political entity following the historic results.

Ms Sturgeon said the party’s “extraordinary” victory was “something that seemed impossible not that long ago” – claiming it showed there would be “changes to UK governance in the years to come”.

Alliance leader Naomi Long argued that the major breakthrough for her party, neither nationalist nor unionist, should herald the end of a system based on binary division.

Alliance increased its first preference vote share by about 4.5 per cent to 13.5 per cent, leapfrogging the struggling UUP unionist party and SDLP nationalists to become the third largest party for the first time.

Mrs Long called for an end to the current mandatory coalition system, saying she would raise the matter with Mr Lewis next week.

“People are tired of the orange and green – they see it doesn’t deliver,” she told Sky News. “They see it creates instability in our political institutions, and it runs the risk of collapse. I don’t think people of Northern Ireland deserve such poor representation.”

While Alliance is not tied to either community, it has backed the continuation of the protocol. Urging the DUP to end its fierce opposition, she added: “Unionism needs to think very carefully, because it was their Brexit that has delivered this mess. They now need to find a route out of that.”

SDLP leader Colum Eastwood, who saw his nationalist party slump to the fifth-biggest force in the assembly, said supporters had “lent” their vote to Sinn Fein. “People decided to send a very clear message that nationalists should not be locked out of the first minister position.”

Mr Donaldson, who won an assembly seat in Lagan Valley, said he would decide next week whether he would stay at Stormont or give up the seat and return to Westminster as MP for the area.