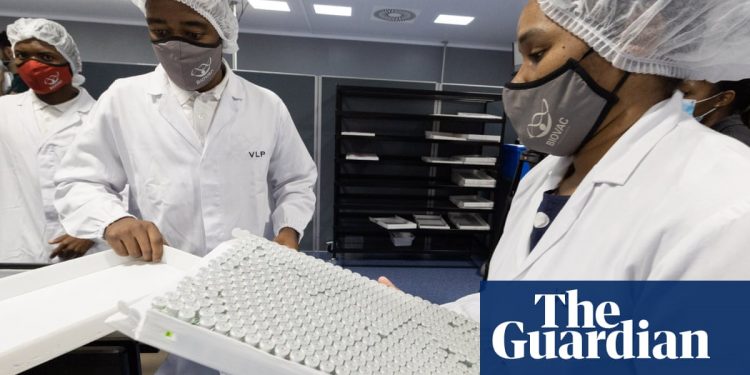 Six African countries – Egypt, Kenya, Nigeria, Senegal, South Africa and Tunisia – will be the first on the continent to receive the technology needed to produce their own mRNA vaccines from a scheme headed by the World Health Organization.

The groundbreaking project aims to assist low- and middle-income countries in manufacturing mRNA vaccines at scale and according to international standards, with the aim of ending much of the reliance of African countries on vaccine manufacturers outside the continent.

The announcement comes in the same week that BioNTech, which produces the Pfizer vaccine for Covid-19 – itself an mRNA vaccine – announced it planned to deliver factory facilities built out of shipping containers to several African countries to allow the Pfizer vaccine to be produced on the continent.

Primarily set up to address the Covid-19 pandemic, the global mRNA hub has the potential to expand manufacturing capacity for other vaccines and products, such as insulin to treat diabetes, cancer medicines and, potentially, vaccines for diseases such as malaria, tuberculosis and HIV.

The WHO established its global mRNA technology transfer hub after vaccine hoarding by wealthy countries – and problems with supply from India, as companies prioritised sales to governments that could pay the highest price – meant low- and middle-income countries were pushed to the back of the queue for Covid-19 vaccines.

The scheme’s ultimate goal is to spread capacity for national and regional production to all health technologies.

While the BioNTech initiative was welcomed for potentially shortening the supply chain of the Pfizer vaccine to Africa, it was also criticised for not sharing technological knowhow, which the WHO project will go some way towards redressing.

“No other event like the Covid-19 pandemic has shown that reliance on a few companies to supply global public goods is limiting, and dangerous,” said the WHO chief, Tedros Adhanom Ghebreyesus, announcing the first recipients of the technology on Friday after visiting the hub in South Africa last week.

“The hub will be not just for South Africa, it’s for Africa, Africa and the whole world, because the spokes will be distributed all over the world.”

“The best way to address health emergencies and reach universal health coverage is to significantly increase the capacity of all regions to manufacture the health products they need.”

“We expect clinical trials [in South Africa] to start in the fourth quarter of this year, with approval expected in 2024, but this process can be sped up, [and] there are other options that the hub is exploring.

Tedros added that the benefits of this initiative would “extend far beyond Covid-19, by creating a platform for vaccines against other diseases including malaria, tuberculosis and even cancer. So this is a strategic investment, not just for Covid, but for all the major health problems that we face”.

Tedros has repeatedly called for equitable access to vaccines in order to beat the pandemic, and rails against the way wealthy nations have hoarded doses, leaving Africa lagging behind other continents in the global vaccination effort.

Currently only 1% of the vaccines used in Africa are produced on the continent of about 1.3 billion people.

The WHO said it would work with the six countries to develop a roadmap of training and support so they could start producing vaccines as soon as possible. Training will begin in March.

The South African hub is already producing mRNA vaccines at laboratory scale and is scaling up towards commercial scale.

The South African president, Cyril Ramaphosa, said Friday’s announcement “means mutual respect, mutual recognition of what we can all bring to the party, investment in our economies, infrastructure investment and, in many ways, giving back to the continent”.

The French president, Emmanuel Macron, said supporting African health sovereignty was one of the key goals of starting up local production, “to empower regions and countries to fend for themselves, during crises, and in peacetime”.

Ramaphosa said on Friday that the global vaccine distribution scheme Covax and vaccines alliance Gavi should commit themselves to buying vaccines from local manufacturing hubs.

“The lack of a market for vaccines produced in Africa is something that should be concerning to all of us. Organisations such as Covax and Gavi need to commit to buying vaccines from local manufacturers instead of going outside of those hubs that have been set up,” Ramaphosa said.

What does it mean to ‘plead the fifth’ – and will Donald Trump do it? – The Guardian