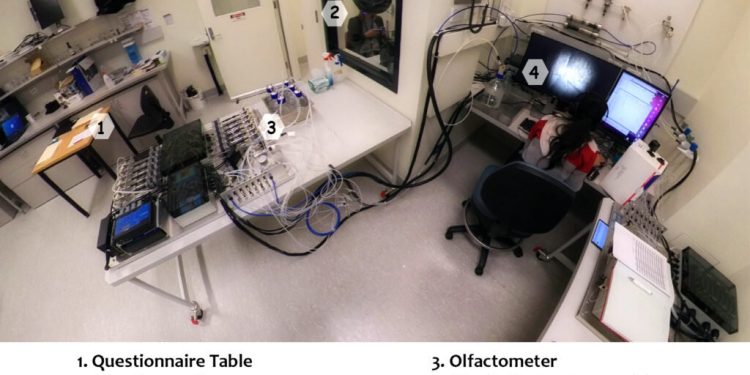 
You walk along a dark winding path deep in a forest. There is a swamp you must wade through. You spot an old wooden shack and walk to it past a smoldering fire. Its broken shutters and verandah sag under vines and neglect.

And so begins your terrifying journey inside the dilapidated haunted house in Resident Evil 7, the survival horror virtual reality (VR) game.

You enter the rundown house through the only doorway not boarded over. Darkness. The door creaks closed behind you, then bangs shut. You turn on your torch…

Impact of odor on a VR environment

While fighting zombies in survival mode, smell is likely the last thing on your mind. But our research has shown that the sense least associated with virtual reality actually holds the key to a more immersive experience. Participants in our study felt that smell gave them a greater sense of really “being there” in the virtual environment.

Surely a sweet-smelling game like Animal Crossing would be a better candidate for testing this theory? Well, as it turns out, bad smells may enhance the VR experience much more than good smells.

With this in mind, the research team used Resident Evil 7 in their study, recently published in PLOS ONE. This game includes scenes with gory artifacts like rotten food and a rotten head to maximize players’ potential responses.

The study participants played a short segment from the beginning of the game, twice, with and without smell. While they were immersed in playing, researchers administered a blend of four specific odors—forest, smoke, rotten and dank. We developed forest, rotten and dank to match the scenes, using industrial flavor compounds.

One compound we used in the concoction for dank was 1-octen-3-ol, which has an earthy, mushroom odor character. We used dimethyl trisulfide in the rotten mix, which is a product of human decomposition and attracts blowflies.

Fleshing out the smells

In the research, we used our prototype “olfactometer” to deliver the odors. An olfactometer sends specific smells along a soft plastic tube fixed underneath the wearers’ nose. As the player worked their way through the VR environment, the olfactometer allowed us to accurately deliver the associated smells.

In one scene players walk through a dark basement in chest-high murky water. A rotten head suddenly appears. High-intensity rotten and dank smells were delivered to match what the player sees. In the forest scene, the players smell a green woody odor and smoke while passing the smoldering fire.

Throughout the experience, we also measured the players’ physiological responses—heart rate, electrodermal activity and temperature—via a smart wristband.

Virtual and augmented reality is usually all about visuals and sound. There has been previous research on whether smell enhances the VR experience, but with mixed results. We were able to use a more precise way to deliver the smells, in a well-developed VR environment. This contributed to the successful results. It took a combination of our tech to deliver smells and flavor expertise, and UTS’s VR research experience, to crack it.

Who knew the zombie apocalypse could help industry?

The work has broader implications for virtual reality beyond use in gaming. The findings provide evidence that smell could help enhance the effectiveness of VR simulations used in training or therapy. For example, VR environments could be made more immersive when used to train firefighters, defense personnel and emergency workers. Emergency response personnel who are confronted with hazardous situations involving bushfires or chemical spills, for example, could benefit from more realistic and immersive training environments which include odors.

The importance of odor in our everyday lives is recognized by the food, cosmetics and cleaning product sectors who invest considerable time and resources in the creation of fragrances that best suit their products. More research is needed into how these findings could be further developed. But they could potentially help industries like these develop and test new products.

So, while in one sense it seems like a bit of a crazy idea, there is a really serious side to this research.

People around the world like the same kinds of smells

Girl, three, was left ‘dead behind the eyes’ after ‘suffering food poisoning from Kinder Surprise’