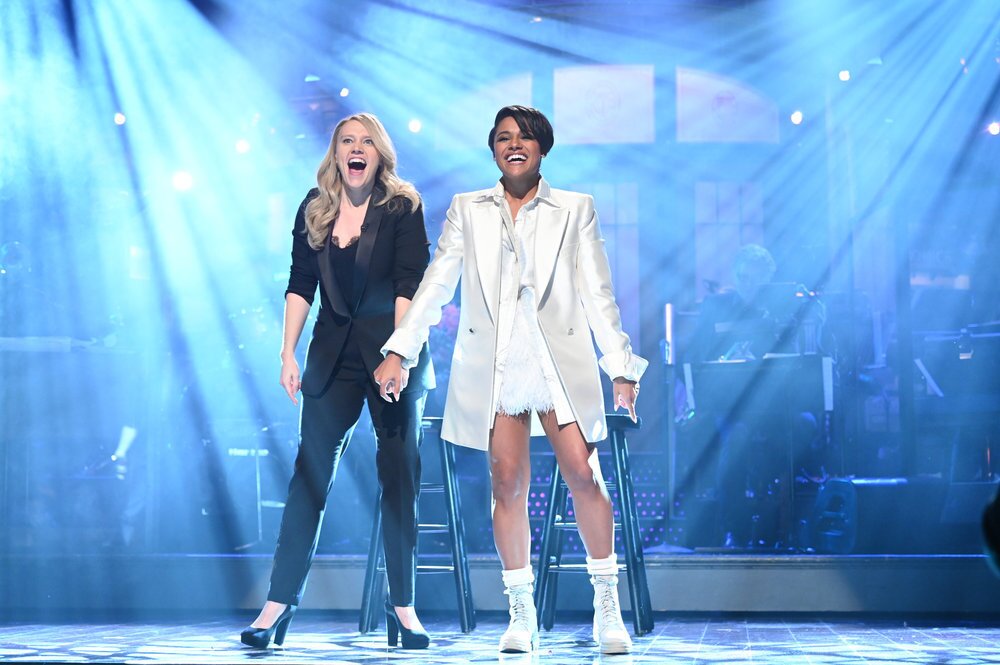 New York City was even more prominent than usual on this weekend’s episode of “Saturday Night Live,” hosted by “West Side Story” and Broadway star Ariana DeBose.

DeBose’s “SNL” debut comes a month after the theatrical release of Steven Spielberg’s adaptation of “West Side Story,” a “Romeo and Juliet” tale set in 1950s New York City, which drew rave reviews from film critics.

Last week, DeBose won a Golden Globe Award for her portrayal of Anita — an achievement she noted, notably, at the top of her “SNL” monologue. (For the most part, actors and studios have downplayed their affiliation with the Globes since the Hollywood Foreign Press Assn., which distributes them, came under fire last year for a lack of diversity and unethical practices.)

“Not many people know this, but ‘West Side Story’ is actually based on another classic tale of star-crossed lovers: ‘90 Day Fiancé,’” DeBose joked during her monologue.

“But it is great to be here representing not only the Latino community as an Afro-Latina, but also the Broadway community. … We are a community that perseveres. I believe Broadway changes lives. I mean, hey, it changed mine. Broadway has this magical ability to bring people together, and I think we can all use a little Broadway right now.”

DeBose’s professional stage presence and peppy optimism was a welcome departure from the previous “SNL” installment, which featured a brief pandemic PSA from Tom Hanks, as well as a mix of old and pre-recorded sketches, as the Omicron variant of COVID-19 surged across New York.

Here’s a sampling of highlights from Saturday’s episode, some of which contain profanity.

During the cold open, President Biden (James Austin Johnson) had a message for his fellow Americans: Stop seeing “Spider-Man: No Way Home,” which broke box office records shortly before the Omicron surge erupted.

“America, I’m here to tell you there’s one simple thing you can do to make this virus go away: Stop seeing ‘Spider-Man,’” he said.

“Think about it. When did ‘Spider-Man’ come out? Dec. 17. When did every single person get Omicron? The week after Dec. 17. Stop seeing ‘Spider-Man.’ That’s really all I have to say.”

DeBose and McKinnon sing their hearts out

Fan-favorite “SNL” cast member Kate McKinnon crashed DeBose’s monologue (because of course she did) for an impromptu “West Side Story” medley showing off the host’s award-winning singing voice. And McKinnon’s.

A particularly satisfying moment in their duet came when Ariana DeBose sang, “I feel pretty and witty and gay,” and McKinnon went in for a fist bump. DeBose and McKinnon are both members of the LGBTQ+ community.

“Did I hear ‘sing songs from “West Side Story” with Kate McKinnon’?” McKinnon said while making her grand entrance. “It’s my favorite show. I’ve loved it since elementary school.”

“I didn’t see it,” McKinnon replied.

The “Weekend Update” team got a special visit from “Sesame Street” star Elmo (Chloe Fineman), who went viral on social media this month because of his ongoing feud with a pet rock named Rocco.

“OK, OK, look,” Fineman’s Elmo said when questioned about a resurfaced “Sesame Street” clip of the lovable puppet losing his mind over his friend Zoe’s pet rock. “Elmo admit Elmo overreacted. And Elmo has already apologized in a long Instagram post. Elmo ready to move on.”

But Unhinged Elmo was soon unleashed when none other than Rocco himself wheeled into the frame on a tiny office chair.

“Why does Rocco get a chair?” Elmo demanded. “Rocco doesn’t need a chair. Rocco doesn’t even have legs. Rocco’s a rock. What is Rocco doing here?” Flames soon ignited around Elmo’s meltdown, referencing another popular social-media meme.

DeBose puts her own spin on ‘The Sound of Music’

In a standout sketch, DeBose parodied the classic “Do-Re-Mi” from “The Sound of Music” with some updated lyrics.

“D’oh, a thing that Homer Simpson says. ‘Ray,’ a movie with Jamie Foxx,” DeBose sang, much to the confusion of the Von Trapp children and their governess (McKinnon).

In another New York-centric moment, Redd gave a news conference as Adams with some help from a City Hall spokesperson played by DeBose.

“As you know, it’s been a tough few years for New York, but we have a new mayor now, and he hungry,” DeBose said. “But I will warn you, the mayor does not like chaos. If y’all act up, I will come for you, OK? Now please clap for your new mayor, the friskiest uncle at your barbecue. Ladies and gentlemen, Eric Adams.”

“What’s up New York?” Redd’s Adams said. “It’s your homeboy, your hometown hero Eric Adams. You feel that? New York is back, baby. The city’s never had a mayor with so much swagger before. … The city’s been suffering from what I like to call a swagless existence. Y’all ain’t had no swagger. That’s why you gettin’ sick. No offense.”