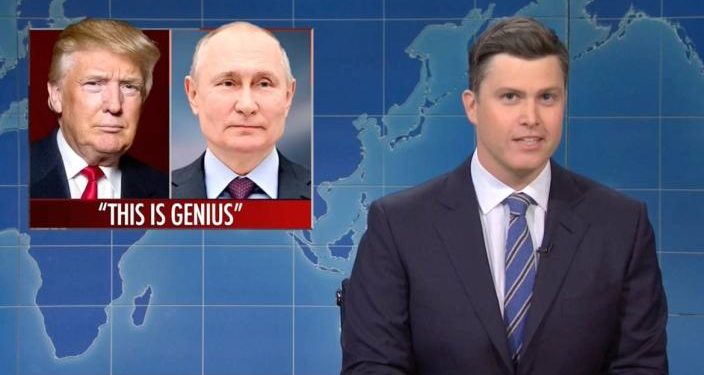 
After opening this week’s show on a somber note, Saturday Night Live avoided trying to mine laughs from Russia’s Ukraine invasion—until Colin Jost and Michael Che took the stage for “Weekend Update.”

“President Putin launched the attack with support from allies like Belarus and Tucker Carlson,” Jost began. “Many analysts were surprised that Putin went through with it even though it was obviously going to be a colossal mistake. But he couldn’t back down after all that build up. Kind of like how NBC still had to go through with airing the Winter Olympics.”

Che meanwhile, lamented that “this is a tough subject to make jokes about,” adding, “I mean, in my lifetime, I’ve seen footage of attacks like this on other countries, but never a white one.”

“I don’t know very much about this whole situation, but I have a close friend who is Russian and I asked her what she thought about it,” he continued. “And she said, ‘Michael, you no pay me to talk, baby.’”

As for all of the Ukrainian citizens—including celebrities—volunteering to fight back against Russia, the comedian couldn’t quite imagine that happening here, joking, “If you ever read in the news that Michael Che has joined an American war, we have just lost that war.”

And finally, Jost noted that “Donald Trump praised Vladimir Putin moving troops into Ukraine, saying, ‘This is genius.’ Though, ‘This is genius’ is also how he sarcastically introduces Eric.”

For more, listen and subscribe to The Last Laugh podcast.