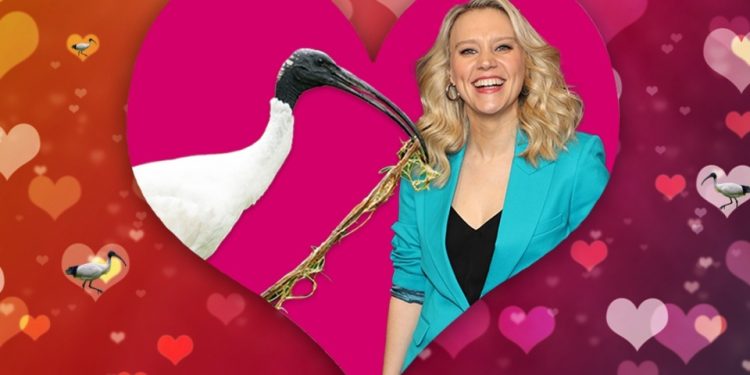 
SNL star Kate McKinnon made an amusing discovery during her recent visit Down Under and she is sharing it with her American compatriots.

McKinnon appeared on The Tonight Show Starring Jimmy Fallon this week to plug her new series Joe vs Carolean adaptation of the 2020 podcast about the convicted felon and big cat handler Joe Exotic.

Late-night host Fallon gushed to McKinnon about Australia, where the series was filmed.

“You go for the people and the animals.”

It was during McKinnon’s first day on our shores that she became acquainted with a certain white ibis.

“I was walking on the street and I saw what I thought was the most beautiful bird I’ve ever seen in my life,” she shared.

McKinnon described the bird as “gigantic”, with “beautiful white plumage and a long, elegant beak”.

She recalled feeling blessed to have witnessed such a “majestic” creature loose on the street, so she asked a bystander about the “gorgeous bird”.

The Australian white ibis, otherwise known as the bin chicken, can be found around the country. But they are everywhere in Sydney.

Ms Davis told The New Daily there are several theories explaining the origins of the bin chicken in general urban areas.

“One of the theories is that there were a couple of accidental introductions from zoos and non-wild sources of ibis that may have been released into the wild,” Ms Davis explained.

“They would have started potentially as pockets in the major regions where they were released, but because the resources and climate conditions along the coast were quite favourable in general, the urban populations just bloomed.”

Another theory suggests wild ibis that traditionally breed inland potentially used the coastline as a landmark to navigate, so that could have led to a spread along the eastern coast, where resources are more stable and reliable.

The bin chicken earned its name from its habit of rummaging through rubbish bins for food.

Some might say bin chickens are part of the city’s identity, but there is a love-hate relationship there.

Online and in stores you can find enamel pins, shirts, hats, tote bags and greeting cards adorned with bin chickens.

“What I learned was that the ibis is called a bin chicken because they eat garbage – out of the dumpsters – and that is their pigeons, and they have about eight songs about how much they hate them,” McKinnon explained to Fallon.

“And to me, that was the most beautiful thing I have ever seen.”

The documentary did huge numbers on Netflix and managed to pierce the COVID-19 news cycle that dominated headlines at the beginning of 2020.

But McKinnon, who stars as Baskin in the new series, believes the documentary didn’t do the activist justice.

“People didn’t walk away with the most rounded picture of who she is, what she’s about and what she’s been through,” McKinnon said.

“She’s had quite a tough life.”

McKinnon has yet to meet the real Baskin, but because the animal rights activist likes to share her life on YouTube every day, it does feel like she knows her on some level.

“She deserves some reconsideration,” McKinnon said.

The series also boasts a large cast of Australian actors, including David Wenham (Faramir in The Lord of the Rings).

He is joined by Marlo Kelly as Baskin’s daughter, Nic English as Exotic’s first husband Brian Rhyne and Tom Rodgers as his most recent ex-husband Dillon Passage.

Joe vs Carole premieres on March 4 only on Stan.

His Heart Ached So Much After Family Dumped Him, Shuts Himself Down And Cried All Day

His Heart Ached So Much After Family Dumped Him, Shuts Himself Down And Cried All Day