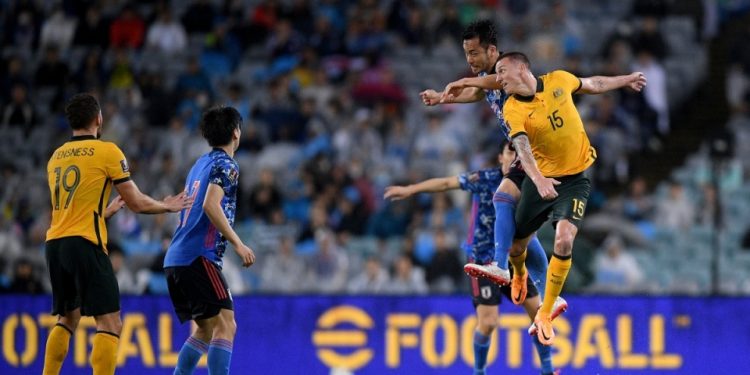 The Socceroos’ hopes of automatic qualification for the World Cup are over after suffering a late 2-0 defeat at the hands of Japan in Sydney.

Kaoru Mitoma popped up for Japan with a brace in the final minutes to book his country’s direct route to Qatar on a wet Thursday night at Accor Stadium when the visitors could have scored five or six.

The defeat in front of a damp and despondent 41,852-strong crowd was Australia’s first live World Cup qualifier loss on home soil in 40 years.

Coach Graham Arnold, who returned to the dugout after spending time in COVID isolation, must now steer a side that has just one win from its last six through the intercontinental playoffs to get to Qatar 2022.

Kaoru Mitoma has surely sent his country to Qatar 2022. It looks like the @Socceroos will have to do it through the playoffs#AUSvJPN pic.twitter.com/A5uH6EUyoc

The Socceroos’ final Group B game is against Saudi Arabia in Jeddah next week but the game is a dead rubber before they face the third-placed team in Group A – either Syria, Lebanon or UAE.

Should they advance they will then have to beat South America’s fifth-best team.

The home side struggled to mount anything in attack, its defence was often overrun on the counter and it didn’t look like a team that would have the quality to do anything should they get to the World Cup.

Australia was given an early warning of what was to come when Liverpool’s Japanese midfielder Takumi Minamino fizzed a shot at Mat Ryan after less than a minute of play but the Socceroos’ only clearcut chance came from a corner.

Trent Sainsbury challenged goalkeeper Shuichi Gonda and the ball was turned in for an own goal by defender Miki Yamane at the back post.

Bahraini referee Nawaf Shukralla immediately ruled out the goal, even though replays showed the faintest of contact from Sainsbury.

Quickly Minamino flashed two headers onto the bar with Ryan well beaten to the ball both times but able to remove the threat.

Australia’s best chance came right at the end of the second half with an Ajdin Hrustic cross finding Mitchell Duke unmarked in the middle of the box but he could only limply fire his header straight at Gonda.

Mitoma piles on the misery and scores his second of the game#AUSvJPN pic.twitter.com/SBh7Ehjq2T

Duke was largely ineffective and he was replaced by 34-year-old Uruguayan-born striker Bruno Fornaroli.

Melbourne City youngster Marco Tilio also entered the fray in the second half and he looked the most likely of any Socceroos player to conjure anything.

But it was another substitute, Mitoma, who made the difference.

A ball was cut back from the byline in the 89th minute and the 23-year-old fizzed a bobbling ball past Ryan to put Japan ahead.

Arnold looked to the sky and then a second came late into stoppage time as Mitoma weaved in through some lax Australian defending from the left.

He fired at Ryan who didn’t have enough body behind the ball to prevent it from trickling into the goal.

Ukraine can win says Johnson, as Russian forces driven back from Kyiv