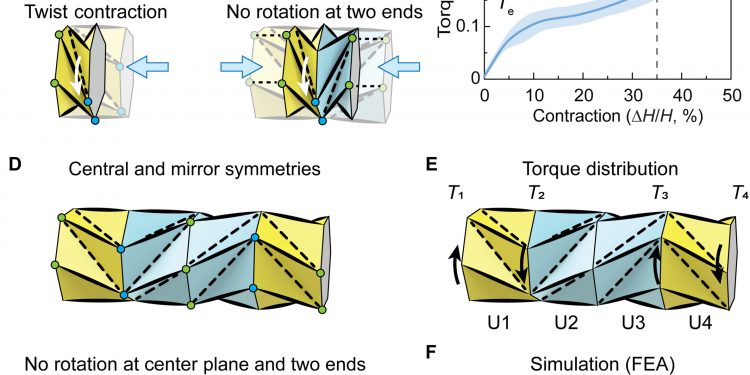 
Materials scientists aim to develop biomimetic soft robotic crawlers including earthworm-like and inchworm-like crawlers to realize locomotion via in-plane and out-of-plane contractions for a variety of engineering applications. While such devices can show effective motion in confined spaces, it is challenging to miniaturize the concept due to complex and limited actuation. In a new report now published in Science Advances, Qiji Ze and a team of scientists in mechanical engineering and aerospace engineering at Stanford University and the Ohio State University, U.S., described a magnetically actuated, small-scale origami crawler exhibiting in-plane contraction. The team achieved contraction mechanisms via a four-unit Kresling origami assembly to facilitate the motion of an untethered robot with crawling or steering capacity. The crawler overcame large resistances in severely confined spaces due to its magnetically tunable structural stiffness and anisotropy. The setup provided a contraption for drug storage and release with potential to serve as a minimally invasive device in biomedicine.

Bioinspired crawling motion shows adaptation to complicated terrains due to its soft deformable dimensions. Researchers aim to engineer crawling for a variety of applications in limited or confined environments, including extraterrestrial exploration, tube inspection, and gastrointestinal endoscopy. Origami provides an appropriate method to generate contraction relative to structural folding, which can be adapted to engineer robotic crawlers. The team described Kresling patterns; a specific type of bioinspired, origami pattern used to generate axial contraction under torque or compressive force, coupled with a twist from the relative rotation of the device units. Ze et al illustrated a magnetically actuated small-scale origami crawler to induce effective in-plane crawling motions. The scientists developed a four-unit Kresling assembly and verified torque distribution on the crawler using finite element analysis to induce motion. The setup also provided drug storage and release capabilities to illustrate the multifunctional crawler.

During the experiments, Ze et al showed clockwise or anticlockwise twisting direction based on the crease direction of the Kresling unit. For translational crawling, they designed the Kresling crawler to avoid lateral movement, and accomplished this by introducing the Kresling dipole; a phenomenon comprised of two Kresling units with similar geometry and reverse crease direction, to show mirror symmetry. The team designed the unit to be either monostable or bistable. Monostable functionality facilitated smooth and continuous deformation as well as automatic recovery, to return to the stress-free initial state of the crawler after releasing the applied loading. The team showed the necessity for torque balance of the whole system for a purely translational crawling motion and verified torque distribution by simulating contractile motions of the crawler via finite element analysis.

Ze et al provided torque distribution for the crawler to achieve the desired levels of simultaneous contraction, relative to an appropriate actuation method. Magnetic actuation is an ideal option since it provides untethered fast responses for real-time manipulation of the crawler in a confined space. The process can also isolate the power and regulate the system for a variety of applications including in vivo drug delivery and additionally showed capacity for selective activation of deformable units of origami assemblies for effective motion. Ze et al established the soft robotic crawlers by attaching four magnetic plates made of silicone embedded with hard magnetic particles to tune the density of magnetization after adjusting the volume fraction of magnetic particles. They better defined magnetic actuation by developing a local right-handed coordinate system and experimentally verified magnetic actuation, then induced friction by designing two feet for the robot made of polymer and acetate tape. The feet imparted anisotropic friction to the front and rear regions of the robotic crawler to facilitate translational motion.

The research team enabled the robots to navigate complex environments, where the magnetically actuated Kresling crawler steered with multiple degrees of freedom, compared to existing crawlers. In a 10-mT magnetic field, for instance, the team accomplished rigid body rotation of the crawler, in addition to continuous changes in navigation around an “O” path at a magnetic field of 40 mT. This capacity to steer will be useful in biomedical environments, where large resistance from contact between tissues and organs can hinder the motion of soft machines within limited spaces. The scientists ultimately developed a Kresling crawler to crawl in an agile manner to steer under precise magnetic regulation and move in confined spaces for biomedical applications, including endoscopy or on-demand drug release as well as biopsy. Ze et al envision the integration of mini cameras, forceps, and drug pills onto the setup to facilitate these functions. As proof of concept, they demonstrated the capacity to store and release drugs from the inner cavity of the Kresling origami crawler.

Outlook: From the lab bench to the clinic

In this way, Qiji Ze and colleagues formed a magnetically actuated small-scale crawler for effective, in-plane crawling motion across limited spaces. The researchers showed the mechanism of action of the soft robotic origami crawlers by using magnetic actuation. They steered the micro-robots to effectively overcome large resistances typically encountered in severely confined spaces in vivo. Ze et al highlighted the drug storage and release potential of the crawler based on the inherent internal cavity of the Kresling unit. The team envision the translational potential of the device, to ultimately manufacture autonomous biomedical robots for future diagnostics and treatment by integrating sense, vision, and drug storage into the Kresling origami internal cavity.

A healthy lifestyle is associated with more years without Alzheimer’s