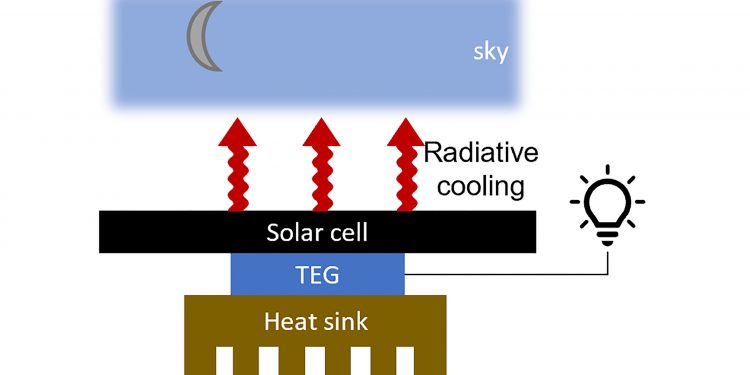 
About 750 million people in the world do not have access to electricity at night. Solar cells provide power during the day, but saving energy for later use requires substantial battery storage.

In Applied Physics Lettersresearchers from Stanford University constructed a photovoltaic cell that harvests energy from the environment during the day and night, avoiding the need for batteries altogether. The device makes use of the heat leaking from Earth back into space—energy that is on the same order of magnitude as incoming solar radiation.

At night, solar cells radiate and lose heat to the sky, reaching temperatures a few degrees below the ambient air. The device under development uses a thermoelectric module to generate voltage and current from the temperature gradient between the cell and the air. This process depends on the thermal design of the system, which includes a hot side and a cold side.

“You want the thermoelectric to have very good contact with both the cold side, which is the solar cell, and the hot side, which is the ambient environment,” said author Sid Assawaworrarit. “If you don’t have that, you’re not going to get much power out of it.”

The team demonstrated power generation in their device during the day, when it runs in reverse and contributes additional power to the conventional solar cell, and at night.

The setup is inexpensive and, in principle, could be incorporated within existing solar cells. It is also simple, so construction in remote locations with limited resources is feasible.

“What we managed to do here is build the whole thing from off-the-shelf components, have a very good thermal contact, and the most expensive thing in the whole setup was the thermoelectric itself,” said author Zunaid Omair.

Using electricity at night for lighting requires a few watts of power. The current device generates 50 milliwatts per square meter, which means lighting would require about 20 square meters of photovoltaic area.

The team aims to optimize the thermal insulation and thermoelectric components of the device. They are exploring engineering improvements to the solar cell itself to enhance the radiative cooling performance without influencing its solar energy harvesting capability.

Provided by
American Institute of Physics