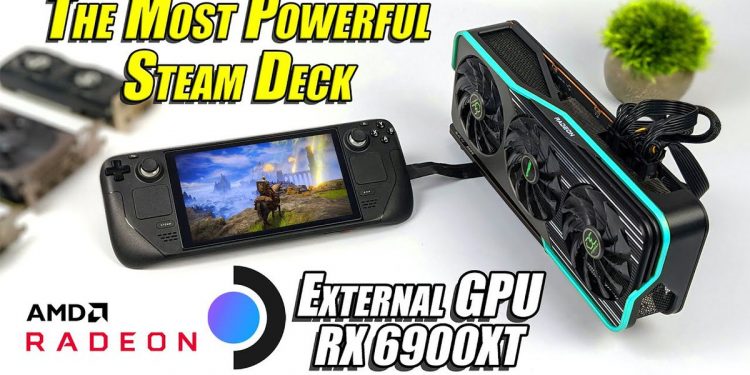 
The $400-plus Steam Deck gaming handheld does not support external graphics cards. Valve has been clear on this point for months — you can’t magically plug in a dock and run Cyberpunk or Elden Ring at 4K. But ever since the company revealed that the Steam Deck’s storage plugs into a (relatively) easily accessible M.2 PCI-Express x4 socket, the PC gaming community has speculated that an eGPU module could totally fit there instead.

Now, YouTuber ETA Prime has actually done it, adding an AMD Radeon RX 6900 XT, one of the highest-end graphics cards on the market.

It works, it runs, it plays games at 4K with maxed-out settings at framerates a vanilla Steam Deck could only dream of. But no, you probably shouldn’t do this at home! Not only does it kind of defeat the portable purpose to have a desktop graphics card sticking out the back — not to mention an external power supply! — but a bunch of games seem to bog down due to having a relatively slow CPU and only four lanes worth of PCI-Express bandwidth for that beefy graphics card, too.

Oh, and you can’t close the Steam Deck’s case, either, which is probably not optimal for its longevity. And ETA Prime says an Nvidia GPU didn’t work.

Perhaps some future Steam Deck will have a bonafide external graphics compatible connector so you could simply plug in a ready-made eGPU box? Thunderbolt is pricey and traditionally exclusive to Intel systems, but AMD’s Ryzen 6000 processors support USB 4, which incorporates the Thunderbolt 3 spec. And AMD has been working on Linux drivers specifically to allow hot plugging and unplugging of external graphics cards.

It might cost Valve more to incorporate the faster I/O that’d be required to enable a single-cable-4K-graphics-docking dream, but Valve might be up to it — it’s publicly said that it’s not only interested in working on a Steam Deck successor but that it was surprised how many buyers opted for a premium $649 model instead of the $400 base configuration.

Me, I’ll probably just stream my games from my desktop PC to the Deck inside my own home. It works fairly well.