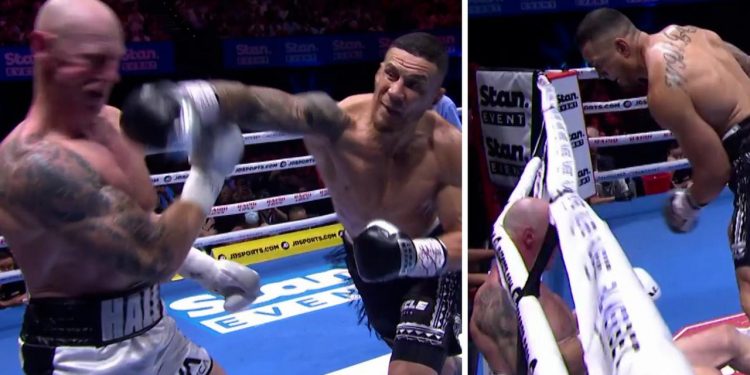 Sonny Bill Williams has knocked out AFL great Barry Hall in the first round of their highly-anticipated fight that proved an utter mismatch.

Williams landed the first big right inside 30 seconds and Hall went down for what initially appeared to be the end of the fight but he survived the count.

The AFL premiership-winning captain hit the canvas again after just 90 seconds and when Williams dropped Hall a third time at the two-minute mark, it was all over.

‘WAS SUPPOSED TO GO 10’: Tszyu delivers brutal training ‘bashing’ in Vegas warning for US rival

TSZYU’S OPPONENT: An Olympian who fought for a world title and trains with the champ

“I don’t think in Sonny Bill’s wildest dream did he see a first round stoppage.”

Triple boxing world champion Danny Green responded: “No way. I thought it would go the other way early and Barry was going to impose his will, but Sonny’s speed and size was too good.”

Williams then called out NRL great Paul Gallen as a potential next fight.

“There’s talk of Gallen so maybe Gallen (next),” Williams said after the fight.

Gallen then went and spoke to Gallen ringside in what appeared a friendly encounter.

Williams is now unbeaten in nine professional fights dating back to 2009, but he’s only fought twice in almost seven years.

On the undercard, Anthony Mundine’s son Rahim made a successful pro debut by defeating Lepani Levatia via decision.

But the budding rugby league player is focused on making his NRL debut this season for the Wests Tigers insteaad of embarking on a serious boxing career.

“I’ll try do (boxing) in the off-seasons, for footy, but my main goal right now is to crack it in league,” Mundine said.