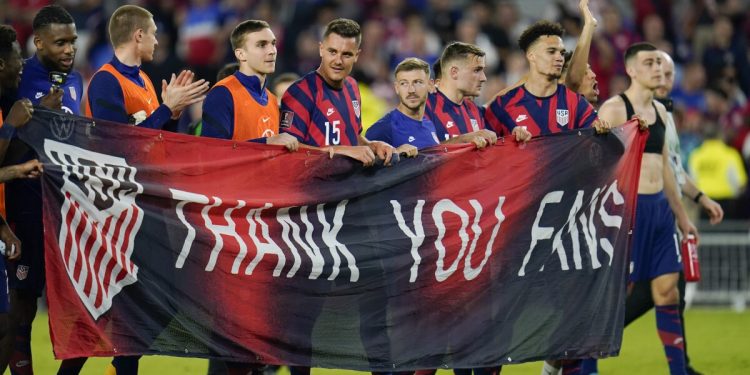 The World Cup qualifying tournament was just getting started when the players on the U.S. team realized they had a problem.

It had nothing to do with the roster or injuries or even the playing style. It was the locker room sound system. It wasn’t loud enough for some of the dressing rooms the team was using.

“Since I’ve been with the national team, we’ve had this tiny little Bose speaker. Can’t hear the music,” said defender DeAndre Yedlin, whose 72 appearances leads all national team players. “I don’t know why it took eight years or however long it took, but finally we got a nice speaker that we can play.

“We’re pretty excited about it.”

The speaker, which the team christened 10 days ago, appears to have arrived just in time because the U.S. may have reason to celebrate Wednesday night after the final game of what has been an arduous seven-month, 14-game qualifying competition.

The top three teams in the eight-team tournament advance directly to this fall’s World Cup in Qatar, and the only way the U.S. can finish lower than third is by losing to Costa Rica by six or more goals. The U.S. hasn’t lost a game that badly since 1979.

Win, draw or lose by five goals, it all ends the same way — with the U.S. in the World Cup and the stain of missing the tournament four years ago partially erased.

But the Americans say they want more. The U.S. has never won a qualifier in Costa Rica, for example, and ending that spell Wednesday would be a fitting coda to the qualifying competition.

Costa Rica, meanwhile, comes into the match in a far more precarious position. Although the Ticos are unbeaten in their last six games, they stand little chance of qualifying directly for Qatar. To pass the U.S., they would have to win Wednesday and overcome a 10-score deficit in goal differential; catching third-place Mexico would require El Tri losing at home to El Salvador and giving up its four-goal advantage in the differential.

But even with a loss, Costa Rica is assured a spot in an inter-confederation playoff, where a final World Cup berth will be at stake. So with nine players carrying yellow cards, coach Luis Fernando Suárez may decide to hold them out against the U.S. rather than risk losing them to suspension for June’s playoff game.

U.S. midfielder Tyler Adams waved away any talk of hypotheticals or complicated scenarios. For him, a win will take care of everything.

“Whatever the circumstances are, we haven’t qualified for the World Cup. And that’s the reality,” he said. “We’re going into this game with the mentality to win.”

“I want to go in every game with the mindset that we’re going to win,” Adams continued. “We’re in a position right now where we can come to Costa Rica and get the first win. It’s putting a checkmark next to something that no other team has done.”

If that happens, at least partial credit should go to the team administrator who ordered the new boom box. And if that sounds crazy to you, then you’ve never been around a team of elite athletes. For them, music isn’t just background noise, it’s the soundtrack to their daily routine; it’s what keeps the energy up and the tensions down through a long season — or a long qualifying tournament.

With the U.S. team, forward Tim Weah is in charge of the playlist, and it’s a job he takes seriously.

Weah, 22, says he’ll play anything, but his tastes run toward reggaeton and rappers J Balvin and Bad Bunny.

“I like the music he plays,” said Yedlin, 28. “As long as I see everybody’s catching a vibe, that’s the most important thing. The strength of this group is we’re so together. We have such a good chemistry that everybody’s having a good time.”

That has been building for a long time, Adams and Weah agree. Although the U.S. has one of the youngest national teams in the world, much of its core has played together for years on younger age-group national teams.

“We’ve created bonds and a chemistry that, to be honest with you, is very different than a lot of teams that I’ve played on,” said Adams, 23. “I think that comes down to the fact that we’re young, we’ve played together before and we’ve really prepared ourselves for this opportunity.

“We really want to rewrite how American fans view us. Not just through our style of play, but our intensity, our commitment, our belief.”

And, he might have added, by turning the music up as well.