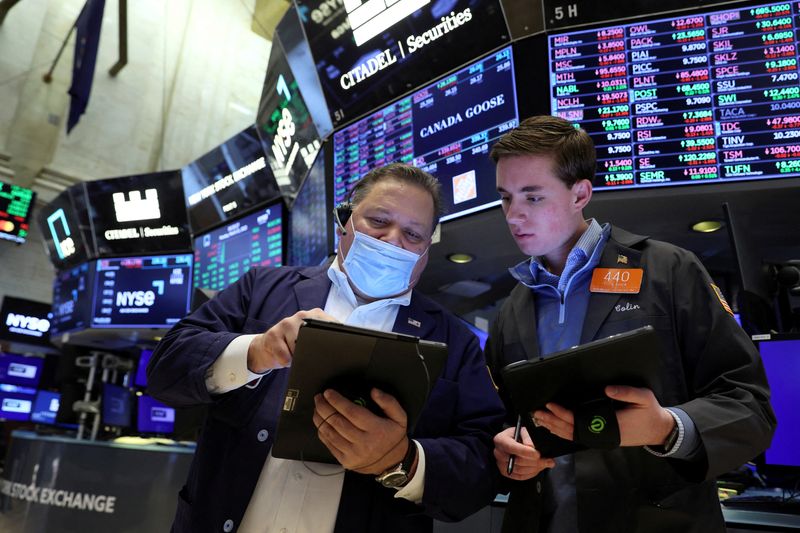 NEW YORK (Reuters) – The rose for a third day on Monday, as a sharp climb in shares of Tesla (NASDAQ:) overshadowed weakness in energy and bank stocks, while Russia and Ukraine were poised to hold their first face-to-face peace talks in more than two weeks.

Electric-car maker Tesla Inc jumped 8.03% and was the biggest boost to the S&P 500 and Nasdaq after saying it will seek investor approval to increase its number of shares to enable a stock split, helping to lift the consumer discretionary index 2.67% as the best-performing sector on the session.

The S&P energy index, off 2.56%, was the worst-performing sector on the session after oil prices tumbled on the heels of a lockdown in China’s financial hub, Shanghai, to curb a jump in COVID-19 infections that sparked demand worries.

Financials were also among the weaker sectors on the session, due in part to a Morgan Stanley (NYSE:) downgrade on U.S. banks, which cited escalating risks and the likelihood that rate hikes by the Federal Reserve have already been priced in by the market. The S&P bank index shed 0.99%.

The sell-off in the bond market resumed on Monday, with short-dated yields hitting their highest since 2019 and the yield curve as measured by the gap between five- and 30-year yields briefly inverted for the first time since early 2006, raising concerns the Federal Reserve’s more aggressive monetary policy will dent economic growth and potentially cause a recession.

“Financials … so a lot of people bought those or own those on the basis of these will do better in a higher rate environment so I’m not surprised to see the financials back off relative to what is going on in the bond market,” said Stephen Massocca, senior vice president at Wedbush Securities in San Francisco.

“Of course commodity names have rallied so high and so hot that it is not surprising to see those names back off, that is kind of what led the market down, but I still think the news for most of these commodity companies will be very, very good.”

The S&P was able to rebound from declines earlier in the session, with the benchmark index falling as much as 0.6% at one point.

Strong economic data and gains in beaten-down growth stocks have helped Wall Street’s main indexes recover in recent days even as the conflict between Russia and Ukraine continues and a host of Federal Reserve policymakers have made hawkish comments about the path of interest rate hikes.

Meanwhile, Ukraine and Russia said their delegations would arrive in Turkey for peace talks that are expected to take place on Tuesday. A senior U.S. official said Russian President Vladimir Putin did not appear ready to make compromises, with Ukrainian officials also playing down the chances of a major breakthrough at the talks.

Volume on U.S. exchanges was 11.23 billion shares, compared with the 14.09 billion average for the full session over the last 20 trading days.

Declining issues outnumbered advancing ones on the NYSE by a 1.06-to-1 ratio; on Nasdaq, a 1.08-to-1 ratio favored decliners.

Grimes is preparing to release an “intergalactic children’s metaverse book”

Grimes is preparing to release an "intergalactic children's metaverse book"