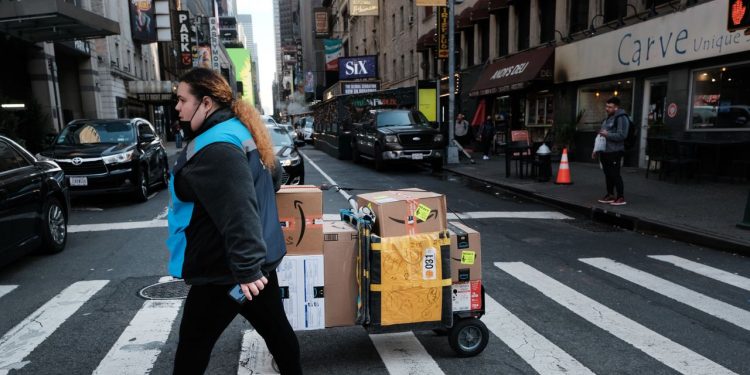 
U.S. stocks ended mostly higher Friday, with all three major benchmarks scoring a second straight week of gains, after investors digested a much stronger-than-expected January jobs report that underlined expectations for an aggressive round of rate increases by the Federal Reserve.

The Nasdaq Composite led the way higher after strong results from Amazon.com Inc.

How did stock benchmarks trade?

For the week, the Dow gained about 1.1%, the S&P 500 rose 1.6% and the Nasdaq climbed 2.4%. Each index notched a second straight week of gains, according to Dow Jones Market Data.

What drove the market?

Stock market trade was choppy after the government reported Friday that the U.S. economy added 467,000 jobs in January and hiring was much stronger at the end of 2021 than originally estimated.

The unemployment rate ticked up to 4% from 3.9%, while the percentage of people in the labor force ticked up to a pandemic high of 62.2%.

“We got a lot of jobs, which is fantastic news,” said Tim Courtney, chief investment officer of Exencial Wealth Advisors, in a phone interview Friday. And “it looks like we’ve got some additional people entering the workforce.”

Economists surveyed by The Wall Street Journal had forecast a payrolls rise of just 150,000 — and some had warned that a fall was possible due to hourly workers without paid sick leave being counted as without jobs. Analysts said investors had been prepared to look through a weak number, on expectations for a sharp reversal in February.

The strong January reading served to reinforce expectations the Federal Reserve will be aggressive in lifting interest rates and taking other steps to pullback on monetary stimulus as it attempt to rein in the highest inflation in decades.

“The party is kind of ending on the rate side,” said Exencial’s Courtney. The economy seems to have enough momentum to keep growth “strong” even if it slows from 2021.

Fed-funds traders increased bets the Federal Reserve would deliver a 50 basis point increase at its March meeting, rather than the typical move of 25 basis points. The CME FedWatch Tool showed fed-funds futures reflected a 27% chance of a half-point move, up from 14% on Thursday.

soared 13.5% Friday, buoying the Nasdaq after the e-commerce giant delivered blowout results late Thursday. Some $11.8 billion of the $14.3 billion fourth-quarter profit it reported was from an investment in Rivian Automotive
RIVN,
,
which went public in the quarter. The company also raised the cost of a Prime subscription to $139 a year from $119 a year.

Read: Amazon Prime is raising its price: Here’s how much it has gone up over the years

The S&P 500, tech-heavy Nasdaq and Dow all scored weekly gains, after breaking a four-session string of wins on Thursday. The big dip came after Facebook parent Meta Platforms Inc.
FB,

Although investors initially seemed “uncertain” about the strong jobs report, as it gives the Fed more “leeway” to hike rates, the market now appears to be “feeling good about it,” said Scott Wren, senior global market strategist at Wells Fargo Investment Institute, in a phone interview Friday.

“We’re back above the 200-day average for the S&P 500,” said Wren. “If we consolidate here and hold these gains that would be a very positive sign.”

How did other assets fare?

—Barbara Kollmeyer contributed to this report.

Hear me out: browser tabs in music player apps

Hear me out: browser tabs in music player apps