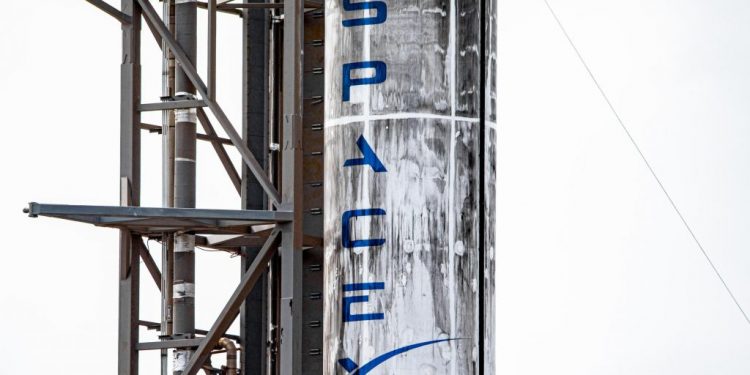 A handful of days after a pair of Falcon 9 rockets launched 106 Starlink satellites in less than 23 hours, SpaceX has already raised another Falcon 9 rocket vertical for another Starlink mission – set to be the fourth this month.

That mission – Starlink 4-18 – will see SpaceX launch another batch of 53 Starlink satellites into low Earth orbit (LEO) from NASA’s Kennedy Space Center LC-39A pad, which supported a different Starlink launch (4-17) just 11 days prior. Weather for the 6:20 am EDT (10:20 UTC) Wednesday launch is expected to be 80% favorable, boding well for an on-time liftoff.

SpaceX says that former Falcon Heavy side booster B1052 – converted into a Falcon 9 booster in late 2021 – will launch for the fifth time in support of Starlink 4-18. In an interesting twist and demonstration of SpaceX’s confidence both in that conversion process and in Falcon booster recovery, Next Spaceflight recently reported that B1052 will be converted back to a Falcon Heavy side booster and will join fellow side booster B1053 – unused since June 2019 – to launch a large commercial geostationary satellite known as ViaSat-3 Americas as early as September 2022.

As is now routine, Starlink 4-18’s Falcon fairing will likely also be flight-proven. Only Falcon 9’s expendable upper stage, a few Starlink payload adapter components, and the Starlink satellites themselves will be new, which has allowed SpaceX to achieve unprecedented affordability and marginal launch costs as low as $15 million. Even including a conservative cost estimate of $500k to $1M per Starlink V1.5 satellite, the entire marginal cost of a modern Starlink launch is likely less than $30-45 million, while competitors like OneWeb have likely paid more than $50 million just for launch services.

Amazon’s ‘Project Kuiper’ Starlink competitor is even worse off after drafting an unprecedented series of multibillion-dollar contracts that will likely ensure that launch services alone cost at least $100-125 million per mission.

Starlink 4-18 will be SpaceX’s 46th dedicated launch of operational Starlink satellites and will raise the total number of working Starlink satellites in orbit to around 2370 if all goes well. Tune in below around 6:10 am EDT (10:10 UTC) to watch the launch live.