SpaceX capsule docks at ISS with an all-private astronaut crew 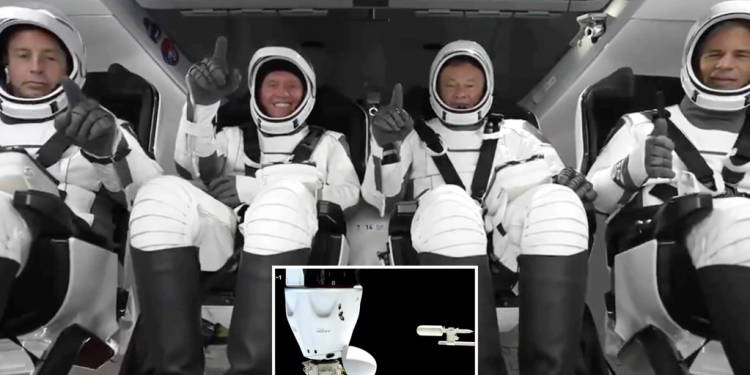 
The historic SpaceX capsule, carrying the first all-private team of astronauts, successfully docked at the International Space Station on Saturday.

The crew of three wealthy entrepreneurs and a retired NASA astronaut were welcomed aboard the orbiting research platform about 21 hours after lifting off from NASA’s Kennedy Space Center Friday. Docking was reported as complete at 8:41 a.m. ET.

Their arrival kicked off a weeklong science mission which is being lauded as a huge achievement in commercial spaceflight.

The Crew Dragon capsule’s docking was delayed about 45 minutes by a technical glitch with a video feed used to monitor the capsule’s rendezvous with the ISS, but the mission otherwise proceeded smoothly.

The three other businessmen reportedly paid $55 million a pop for the ride.

Larry Connor, a real estate and technology entrepreneur and aerobatics aviator from Ohio, is second in command and serving as mission pilot. He’s in his 70s.

The Ax-1 team was welcomed by all seven of the regular, government-paid crew members already occupying the space station, which includes three American astronauts.

A NASA webcast showed the four wide-eyed Axiom astronauts, smiling and dressed in navy blue flight suits, floating headfirst, one by one, through the portal into the space station. Once inside, they were greeted with hugs and handshakes by the ISS crew.

Lopez-Alegria later pinned astronaut wings onto the uniforms of the three spaceflight rookies of his Axiom team during a brief welcome ceremony.