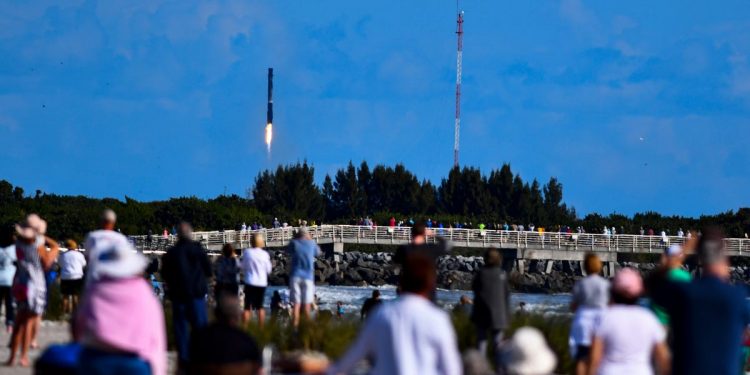 Space is important to us and that’s why we’re working to bring you top coverage of the industry and Florida launches. Journalism like this takes time and resources. Please support it with a subscription here.

A SpaceX Falcon 9 rocket is set for liftoff from the Space Coast Wednesday afternoon, its southern trajectory mission set to produce window-rattling sonic booms when the booster returns to Cape Canaveral.

The 230-foot rocket, slated for liftoff between 2:25 and 3:24 p.m. EDT, is set to take dozens of payloads from Launch Complex 40 into mostly clear skies, then return to nearby Landing Zone 1 for a local booster touchdown.

The trajectory for the mission known as Transporter-5 will see Falcon 9 fly toward the southeast and skirt by the state’s coast.

Just as spectators see the 162-foot booster touch down, however, sonic booms will reverberate across the Space Coast and signal Falcon 9’s arrival. The booms usually sound like one muffled explosion, but can also sound like two or three distinct booms depending on location. While loud and startling, they are generally harmless.

321 Launch:Space news you may have missed over the past week

The liftoff forecast looks solid at 80% “go,” according to the Space Force.

“For the primary launch time early Wednesday afternoon, most activity is expected to be inland of the spaceport, with just a few lingering cumulus clouds and the potential for anvils from activity further west of the primary launch concerns,” Space Launch Delta 45 forecasters said Tuesday.

In the event of a delay to Thursday, Falcon 9’s weather chances drop a bit to 60% “go.”

Timing for the Space Coast’s next launch, meanwhile, is still up in the air. As it stands, an uncrewed SpaceX Dragon capsule will take supplies and science experiments from Kennedy Space Center to the International Space Station no earlier than 11:30 a.m. EDT Tuesday, June 7. A Starlink internet mission, however, could find its way into the schedule between now and then, though SpaceX has not offered any details.

For the latest, visit floridatoday.com/launchschedule.

Visit floridatoday.com/space at 1 p.m. EDT Wednesday, May 25, for real-time updates and live video.