We’re on a long-awaited getaway. My husband, Marc, has an aversion to flying and reasons it’s far easier to load up the car and stick it on a ferry.

So we booked a Brittany Ferries crossing to northern Spain and found a cheap hotel. Just 72 hours later, we’re driving off the boat in Santander and up a winding road towards the Picos de Europa mountains in Cantabria. 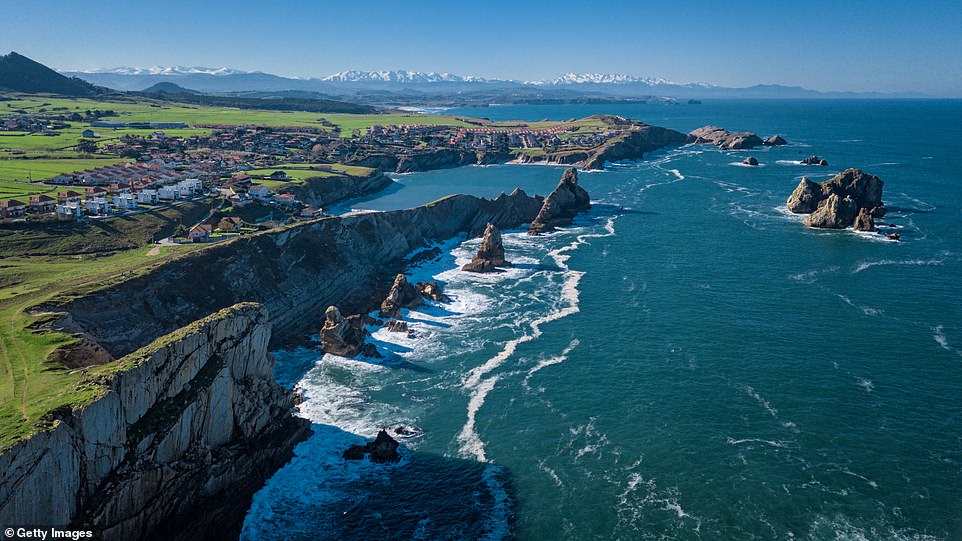 The Cantabrian coast. Jo Kessel and her family explore the Spanish region on a ‘long-awaited getaway’ 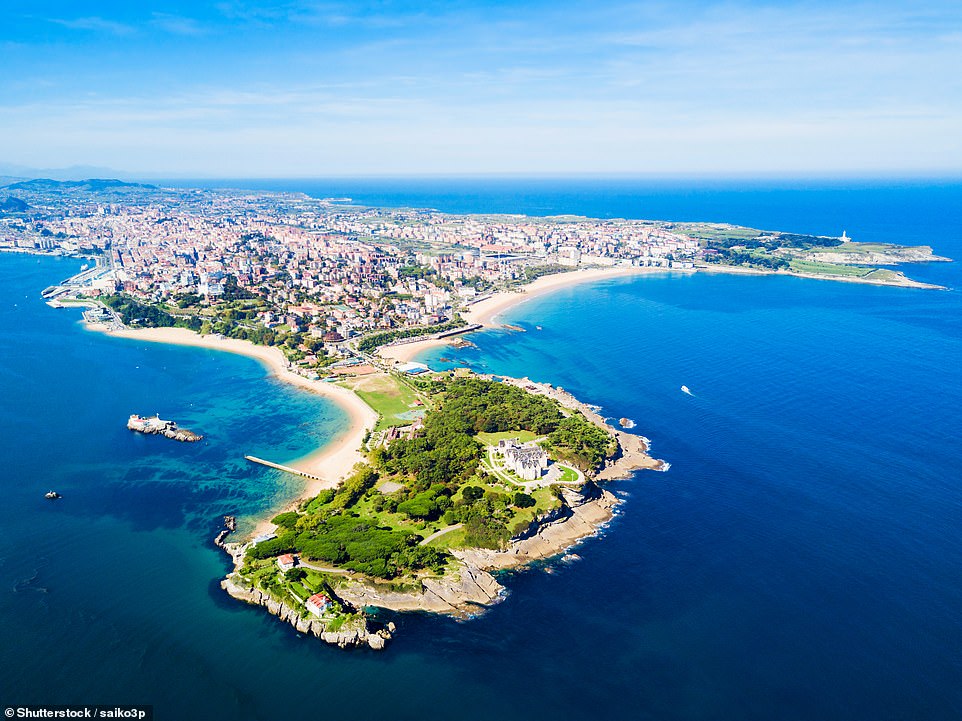 Jo drives from Santander, pictured, up a winding road towards the Picos de Europa mountains in Cantabria

The appeal of this region is its variety — nothing is too far away, which means you can spend a morning at altitude and the afternoon on golden beaches or surrounded by lush countryside.

Our two-star Hotel Infantado is a surprise hit. It looks out on to the Picos foothills and resembles a rustic-chic parador, with a riot of pink geraniums garlanding its wooden balconies. It even has a pool set in beautifully landscaped gardens.

A 15-minute walk away is the medieval town of Potes. Its cobbled streets and ancient bridges huddle around the twists and turns of the river Deva. We pronounce it ‘Diva’, which is ironic considering the town’s lack of pretension. It’s a world away from the Costas; Spain at its most quiet and authentic.

At the heart of Potes is the 15th-century Infantado Tower, a former duke’s residence. It can be climbed for views, and clustered at its base are several restaurants, including the one of ‘stewed kid’ fame. (Next time, my son will order a burger.) 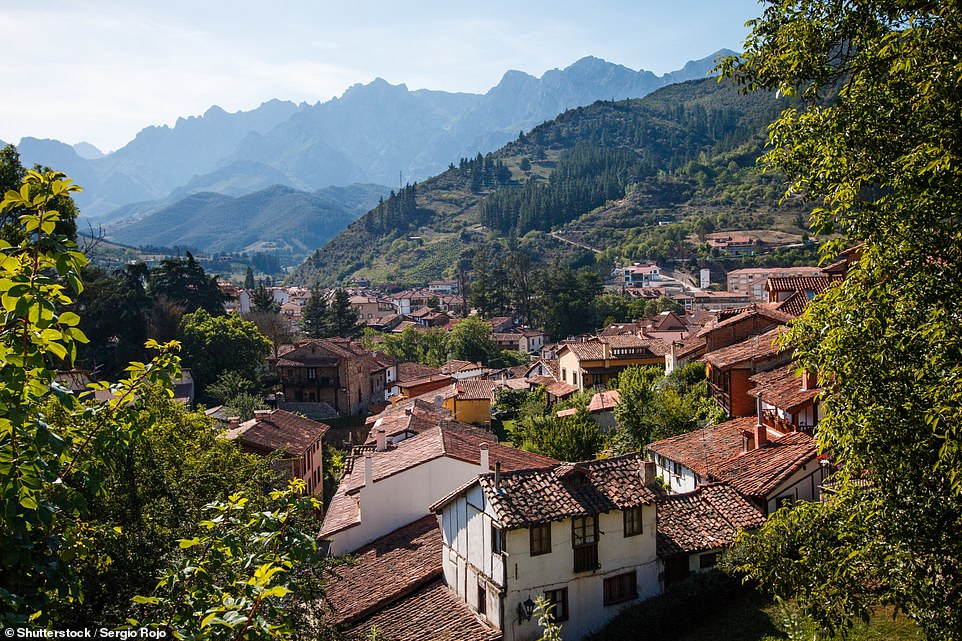 Above is the medieval town of Potes. ‘It’s a world away from the Costas; Spain at its most quiet and authentic,’ says Jo 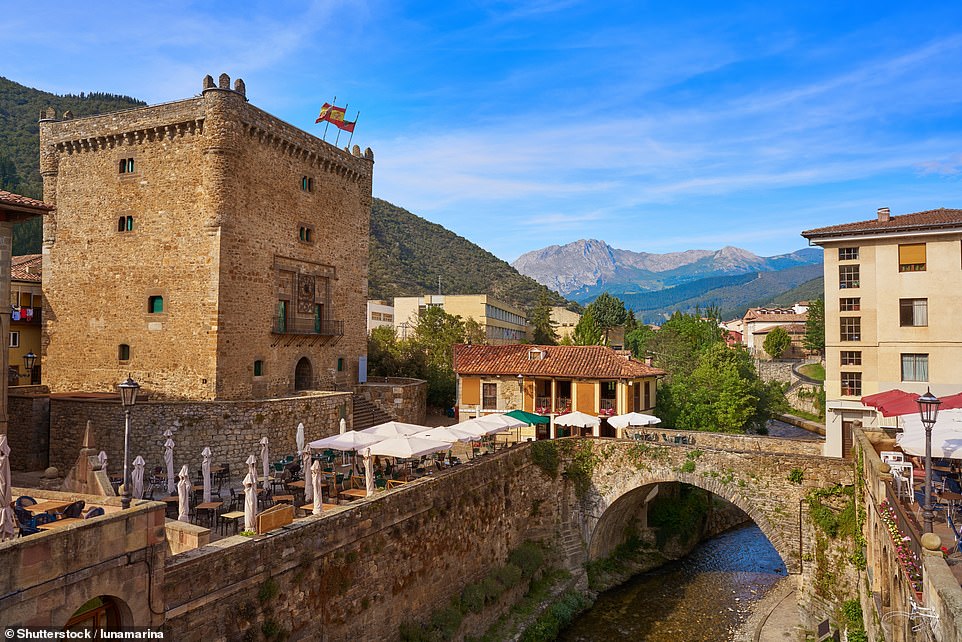 At the heart of Potes is the 15th-century Infantado Tower (pictured on the left), a former duke’s residence that can be climbed for views

Monday is market day and Potes thrums with locals stocking up on cheese, salami and olives. We settle on a picnic lunch of empanadas to take to Fuente De, where a funicular whisks passengers 6,000 ft high in the Picos.

The cable car attendant describes the walk down from the top: ‘It’s nine miles downhill, easy.’

What we haven’t bargained on is the whiteout at the summit, making it tricky even to identify the path. But soon enough the sun burns through the cloud to reveal a vista of imposing, jagged limestone peaks whose ashen colour gives the illusion of them being snow-capped. 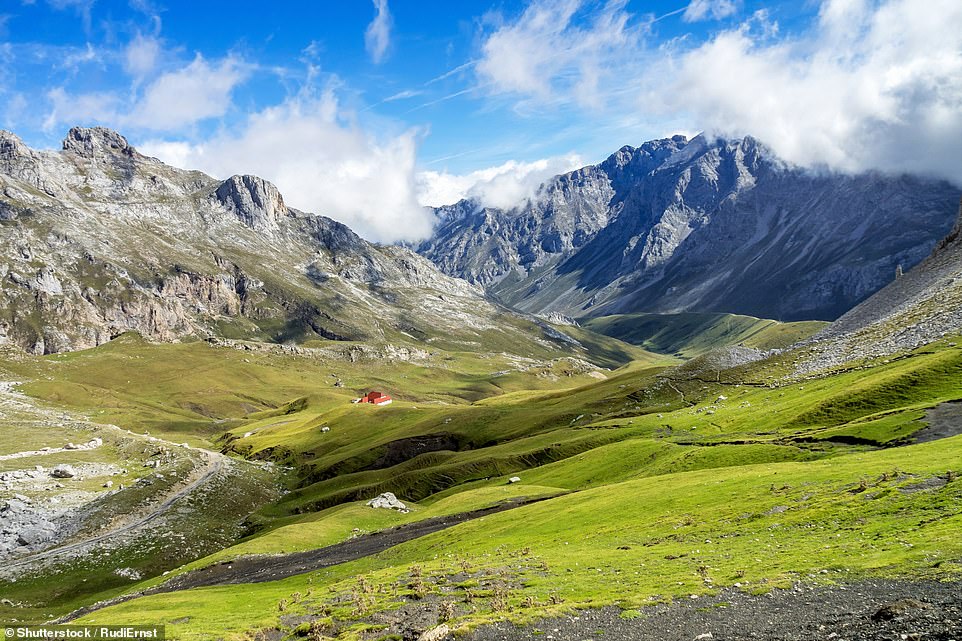 From Fuente De, pictured, a funicular whisks passengers 6,000 ft high in the Picos de Europa mountains. Jo and her family set off on a ‘hilly, five-hour hike’ from the summit 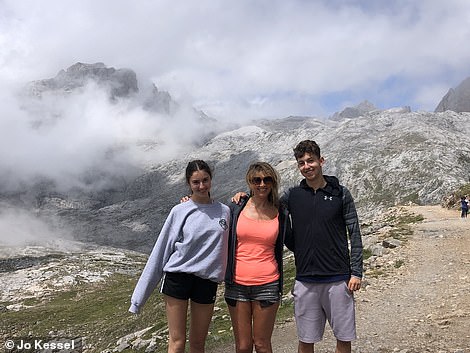 Bring the family: Jo with her children, Hannah and Gabriel

The path meanders downhill at a gentle gradient. Mountain tops give way to pastures of horses, cows and sheep, who eye us when we tuck into our empanadas. The pastry is deliciously light and flaky, oozing with bacon, tomato and cheese. It’s the fertile valley towards the bottom, however, that’s the most striking: an abundance of Mediterranean Sea Holly — a spiky blue flower indigenous to the Picos — tints the grass sapphire.

At 636 square miles, the Picos de Europa National Park is one of Spain’s largest.

Our receptionist advises: ‘The main trails are overcrowded. Stay here and you’ll have the mountains to yourselves.’ Her suggested circuit starts in the remote farming village of Tudes, whose inhabitants still use horses for transport. They trot past and bid ‘hola’ with a tilt of their gaucho hats.

Three nights’ B&B at Hotel Infantado from £310pp, including a cabin and car booking on a return Portsmouth to Santander sailing (brittany-ferries.co.uk). Extra nights from £37 pp. A wine and tapas tasting tour is from £60 pp including transport (toursbylocals.com).

The Picos are omnipresent during our hilly, five-hour hike. We pass through Porcieda, an abandoned hamlet. A ‘SE VENDE’ sign on a crumbling house prompts Gabriel to wonder if he could afford it. Later, we learn the entire hamlet is on sale for €1 million.

For the next few days we lounge by the pool or on Oyambre beach — a wild stretch of sand near the seaside resort of San Vicente de la Barquera.

And on a tailor-made excursion with ToursByLocals, guide Hans introduces us to regional delicacies. We visit an artisan dairy to taste blue cheese (aged traditionally, in caves) and one of Cantabria’s blended sheep and cows’ milk cheeses. Both are rustic, robust and have a spicy kick.

Our last stop is a vineyard where we try some wines and ‘Orujo’, a Cantabrian grappa that’s like rocket fuel. Our favourite is the wine jam, which pairs perfectly with cheese. We shove an entire crate in the boot.

We’ve had a wonderful time in this truly diverse area. And Gabriel is still figuring out how to buy that hamlet.