Speculate to relegate? The price of failure looms large over Everton | Everton 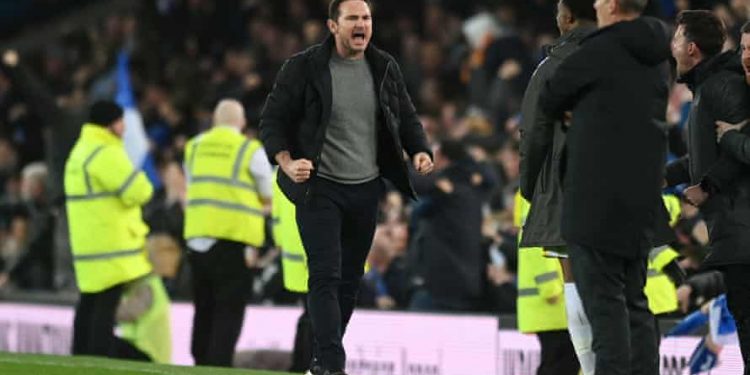 
The losses at Everton have not just been confined to the pitch. With their Premier League status increasingly imperilled, they announced a third successive annual deficit of more than £100m thislast week. Rarely has so much been spent to accomplish so little and if some speculate to accumulate, the danger is that Everton have speculated to relegate.

A glimpse at a team with 15 defeats in 20 Premier League games can prompt questions about where the money has gone. Everton have the worst away record this season and the fewest points in the past six months even though around £550m has been spent on transfers during Farhad Moshiri’s largely ill-fated reign as owner.

The School of Science has scarcely specialised in mathematics. The numbers have not added up. If Everton’s 68-year stay in the top flight comes to an end, the signings will be a reason for a historic slide.

Alex Iwobi’s £28m fee makes him the fourth-most expensive arrival in Everton’s history and there was an element of understatement from the Nigerian when he was asked to describe his time at Goodison Park. “I feel it could always improve,” he says. There are more strident verdicts. He has been branded a waste of money.

But if Everton have had precious little return on their investment, Iwobi may have scored the most important goal of their season. His winner against Newcastle, when Everton were down to 10 men in a game delayed because a protester had tied himself to a goalpost, provoked such delirium that Frank Lampard broke his hand but did not notice at first. “It was crazy, the scenes were amazing,” Iwobi says. “It was one of those feelings you wish never disappears.”

If that strike may prove pivotal in keeping Everton up, three days later they lost 4-0 to Crystal Palace in the FA Cup. Their season seemed distilled into two games: one step forward, a bigger one back. It prompted Lampard to accuse his charges of lacking the necessary “bollocks”.

Iwobi agrees, albeit in more measured words. A capacity to capitulate predates Everton’s latest manager. “It comes from within us,” he says. “We know that sometimes we don’t give the fight that we’re capable of giving. Even before Frank came, we were saying we had to show more character. Our away form has not been great. I feel it is a mental thing.”

Some of the lows have come in the capital and, after March also brought a 5-0 thrashing at Tottenham, London is calling again. Sunday’s trip to West Ham is a reminder of Everton’s past and a vision of an alternative existence. The Hammers now seem to enjoy the annual top-eight finishes David Moyes brought to Goodison Park.

Instead, Everton took the more glamorous option and then veered from Carlo Ancelotti to Rafael Benítez to Lampard. Iwobi has scored one league goal for each of the four supposedly permanent managers to pick him. If that meagre return implies he is part of the problem, he can also look collateral damage, a victim of changing plans, shunted in, around and out of the side.

Iwobi’s £28m fee is similar to Moyes’s net spend across his 11 years on Merseyside. Nine years after he left, the greatest advertisement for Moyesian thrift remains. Séamus Coleman’s £65,000 fee means he stands out even among the other bargains. While the £28m pair of full-backs Everton bought in January, Nathan Patterson and Vitalii Mykolenko, are likelier to be on the bench at the London Stadium and look like the latest indictment of scattergun spending, Coleman carries on as captain, starter and motivator.

A survivor of happier times has taken on additional duties trying to help Everton stay up. “The one thing Séamus is always telling us is that we’ve got to keep on fighting and giving 100%,” Iwobi says. “Whenever we’ve done that, it doesn’t matter which manager we fight under, we’ve normally been able to get results.

Perhaps the straight-talking Coleman has been a rarity in highlighting the threat on the horizon. “I won’t lie, it has been mentioned once or twice but if relegation does get mentioned, it doesn’t get mentioned a lot,” says Iwobi.

For a club whose wage bill peaked at £182m last season, who are building a £500m stadium and who over the past six seasons, have spent more on transfers than Real Madrid and Liverpool it would be the most chastening and costly of demotions. Iwobi says: “We know what is at stake.”