‘Sperm-friendly’ lubricants are not safe for swimmers, study claims 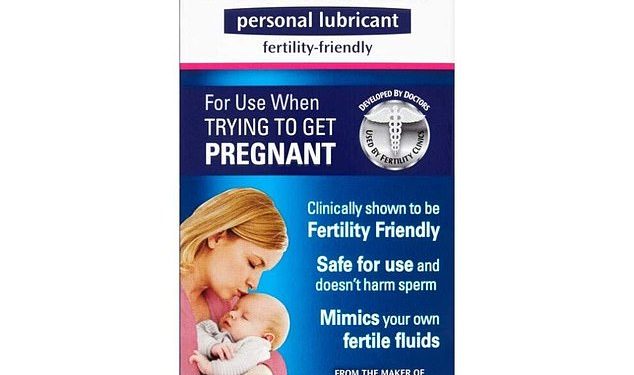 Many ‘lube’ products which claim to be safe for male fertility could actually harm sperm, doctors have warned.

A study found three lubricants marketed as ‘sperm-friendly’ and sold in high street chemists for £20 a bottle can reduce motility — or their ability to swim in the right direction.

Despite the promotional health claims, the researchers concluded these products could ‘actually hinder normal conception’.

The review also looked at two bizarre ‘natural’ lubricants — olive oil and egg whites — which have become popular in some corners of internet forums.

Pre-Seed, which sells for £18.49 per 40g tube at Boots, caused a reduction in sperm motility.

Optilube, priced at £19.99 for 400g on Amazon, and Yes Baby, which costs £17.99 per 150ml bottle at Holland and Barrett, stopped sperm from being able to move altogether.

Olive oil also stifled sperm’s ability to spread, whereas egg whites appeared to have no impact on their performance.

However, raw eggs can contain harmful bacteria — including salmonella — and experts do not recommend using them during sex. 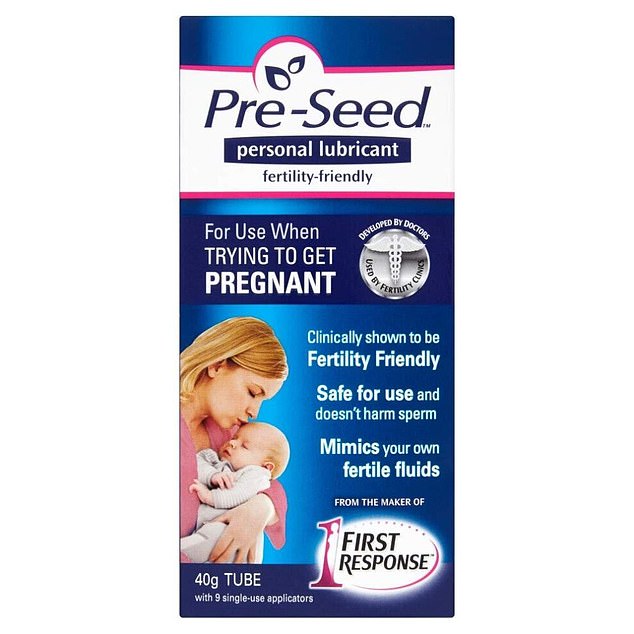 A study today claimed most lubricants marketed as being ‘sperm-friendly’  actually reduce how quickly a man’s swimmers move. Even Pre-Seed (pictured) — which is approved as ‘fertility-friendly’ by the US Food and Drug Administration (FDA) — saw a fall in sperm motility 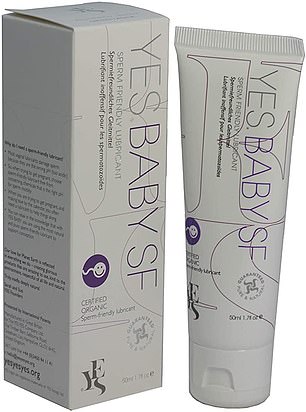 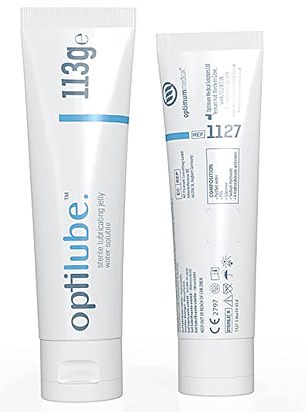 Traditional lubes have been shown to damage sperm motility because they are too acidic and can contain harmful chemicals including parabens.

It has led to an increase in demand for so-called ‘fertility-friendly’ lubricants, despite these costing up to four times more than the traditional product.

Users on forums like Mumsnet have also advocated the use of egg whites and other home products, despite the risks.

For the latest study, published in the International Journal of Gynecology & Obstetrics, researchers from the University of Pretoria in South Africa tested the three branded and two natural lubes on 60 semen samples.

Men were aged 18 and above and the samples were collected from a fertility clinic in Midstream, Gauteng Province.

Researchers used pipettes to divide the samples in six before adding 0.5ml of each of the five lubricants, while leaving one as a negative control sample.

Microscopic cameras were used to measure the speed and movement of the sperm on glass slides, using a score recognised by the World Health Organization (WHO).

After two hours, sperm mixed with olive oil and Pre-Seed samples had scores of one — movement with no direction — and Optilube and Yes Baby had scores of zero — no movement at all.

Sperm mixed with egg white had a score of two, meaning it had slow or sluggish progressive motility.

Meanwhile, sperm not treated with any lubricant had scores of more than two over the period — not statistically higher than egg white.

After 24 hours the three branded lubricants and olive oil all had scores of zero — meaning the sperm was not moving at all.

The egg white and control groups had a score of one at 24 hours. All six sample reduced to zero after 72 hours.

Lead author Johan Markram said: ‘This study is important because it highlights that these so-called sperm-friendly lubricants may actually hinder normal conception.’

Women trying to conceive have started to use egg whites as a natural lubricant more in recent years, with message boards branding them as useful in getting pregnant.

Experts say it has become popular because the type of vaginal mucous produced during ovulation by the body has the same name — egg white mucous — which may confuse people doing their own research.

What are ‘sperm-friendly’ lubricants?

What are ‘sperm-friendly’ lubricants?

Many claim to prevent the usual problems associated with using regular lubricants because they are not as acidic, and will therefore not damage the sperm as much.

Most also do not contain chemicals like parabens — a preservative — which some studies have linked to being harmful for fertility.

Some have been approved the US Food and Drug Administration (FDA) as ‘fertility-friendly’. The category was introduced in 2017.

The UK’s Medicines and Healthcare products Regulatory Agency (MHRA) does not have an equivalent approval system.

What brands are out there?

Pre-Seed, owned by manufacturing company Church & Dwight, is approved by the FDA as being ‘fertility friendly’.

It comes with disposable applicators to make sure the lubricant reaches as high up as the cervix.

Other FDA-approved brands include:

Ape ‘vocabularies’ shaped by social mingling — like in humans

Ape ‘vocabularies’ shaped by social mingling — like in humans